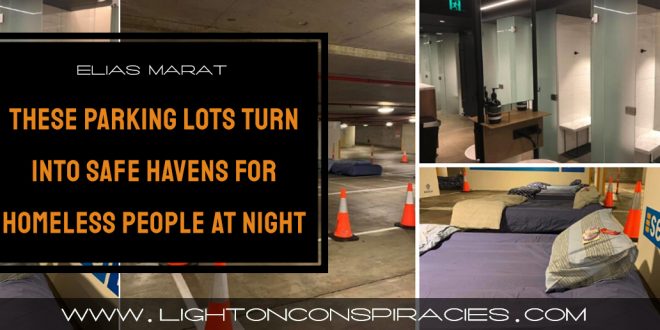 These Parking Lots Turn Into Safe Havens for Homeless People at Night, With Spectacular Results Around the world, the problem of homelessness has only grown over the last several years. The roots of the problem are social in nature: rising housing prices in large cities are leading to mass evictions and displacing communities, while poor access to health care and medical health services overlaps with a number of other public health crises.

To make matters worse, once people end up without housing—by and large through no fault of their own—they are at the mercy of not only society in general, but a number of brutal health risks such as exposure to weather and disease. Homelessness is often the beginning of a never-ending cycle that either leads to, or is accompanied by, mental disorders, untreated medical issues, substance abuse, and complete social isolation.

In Australia, the latest census data shows that the problem of a growing unhoused population has increased in recent years. As a result, many are forced to sleep in the streets under improvised dwellings and tents or find themselves in severely overcrowded dwellings hardly fit for human habitation.

With these horrible conditions affecting an increasing number of people, charity group Beddown has devoted itself to creating new spaces for people in need—especially those “spaces that are commonly used and busy during the day but at night are left vacant or empty,” according to their website.

Beddown then activates and repurposes the space at night into pop-up accommodation to ensure the homeless, those who are sleeping rough are then able to come and get into a bed at night.

Such spaces include vacant office building parking lots. So Beddown partnered with major parking garage operator Secure Parking to launch a two-week trial in Brisbane where a parking garage is converted into a housing facility where homeless people can get some much-needed rest and refuge.

The primary aim is to allow people without housing to get a good night’s rest. Many homeless people suffer from sleep deprivation due to their harsh living conditions, which the charity notes can lead to myriad problems, including: depression, diabetes, hypertension, obesity, memory loss, and impaired cognitive functioning that can lead to substance abuse disorders.

The charity also provides some key services to restore the dignity of its “guests,” including dentists, doctors, nurses, and a hairdresser. Guests are also given access to social services.

We will look to get as close as we can to a proper comfortable bed to provide the homeless with a great night’s sleep is our ultimate goal. Sleep deprivation is a massive issue for our homeless, so being in a place that offers shelter and is safe, secure and comfortable we believe will have a big impact on those who use Beddown.

The concept has been warmly greeted by guests who stayed at the initial Beddown pilot and trial spaces, with over 40 guests staying at pop-up accommodations through the duration of the pilot and all guests saying that they felt safe during the stay. The guests also rated their beds 4.5 out of 5, on average, while also rating their sleep at the same level.

Although as expected we had a few challenges to overcome, it was awesome to start bringing Beddown to life … Beddown will provide an immediate response for those who sleep rough to access safe, secure shelter and access to a comfy bed and a great night’s sleep.

The charity has also shared some of the positive outcomes from their pilot project, including these comments from participants who stayed with Beddown for the duration of the trial: