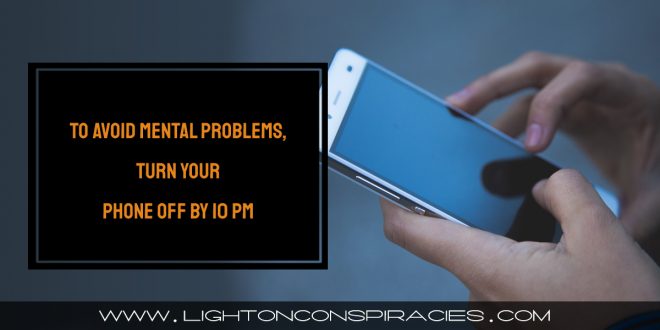 To Avoid Mental Problems, Turn Your Phone Off By 10 PM

Late night phone use has been linked to many mental issues stemming from a lack of sleep.  Now experts are saying if you’d like a clean mental bill of health, turn your phone off by 10 PM.

Looking at your phone after 10 PM causes moodiness the next day because the light tricks your brain into thinking it’s daytime, leading to sleep issues.  Sleeping less than the eight hours per night is associated with intrusive, repetitive thoughts like those seen in anxiety or depression, says new research from Binghamton University, State University of New York.

And humanity’s growing addiction to their phones is not helping matters. Now. more recent research is showing that people who fail to follow their natural body clock rhythm – like staying up to look at their phone rather than going to sleep, are more likely to have depression and mental health problems. The study has also found that those who are inactive during the day and more active or restless at night have an increased risk of depression, bipolar disorder, and low mood.

The findings come from the largest study of its kind, involving more than 91,000 people across the United Kingdom.  The researchers discovered that regular sleep disruptions are associated with difficulty in shifting one’s attention away from negative information – like that we are bombarded with on social media via our phones in the dopamine feedback loop created by companies like Facebook.  This may mean that inadequate sleep is part of what makes negative intrusive thoughts stick around and interfere with people’s lives.

Binghamton Professor of Psychology Meredith Coles and Jacob Nota assessed the timing and duration of sleep in individuals with moderate to high levels of repetitive negative thoughts (e.g., worry and rumination). The research participants were exposed to different pictures intended to trigger an emotional response, and researchers tracked their attention through their eye movements.

According to The Daily Mail,  Professor Daniel Smith, professor of psychiatry at the university, said a healthy rhythm is the key to curing mood disorders. “A healthy rhythm is to be quite active during the day and very inactive at night. This is an important study demonstrating a robust association between disrupted circadian rhythm and mood disorders,” said Smith.

But have no fear if you don’t follow your natural rhythm.  Smith says there are a few things you can do to get more in tune with your body. “There are a lot of things people can do, especially during the winter, such as getting out of the house in the morning to get exposed to light and take exercise, so that by evening they are tired,” he said.  “You can also turn off your mobile phone around 10 pm because the light in it is telling your brain it’s daytime. But it is hard for some people, such as shift workers, because of their job or because of their family circumstances.”

It is already known that the internal body clock regulates many functions including body temperature and eating habits. Long-term night-shift work has previously been associated with an increased risk of cancer, heart disease, and obesity.

Scientists are often interested in finding biological fault in emotional or highly sensitive people (e.g. it’s your genes, it’s brain chemicals), studies like this should offer hope to the weary that you may need more rest and relaxation, less pressure, and maybe less evening phone time.

DISCLAIMER: This article is not intended to provide medical advice, diagnosis or treatment.

Previous Artificial Intelligence: How Much Are You Affected By It?
Next Doctors Get Paid to Prescribe More Opioids