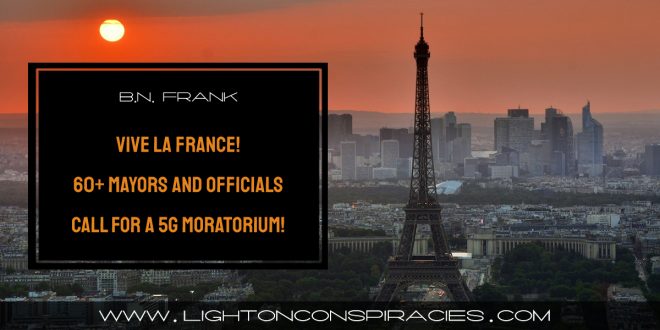 In France, 60+ mayors and officials have also asked for a moratorium on deployment.

In France, Over 60 Mayors and Officials Call for a 5G Moratorium

A petition addressed to Prime Minister Jean Castex, signed by over sixty elected officials including Jean-Luc Mélenchon (deputy of Bouches-du-Rhône (FI)), Manon Aubry (European deputy (FI)) or Michèle Rubirola ( mayor of Marseille) who urged the government to decide on a moratorium on the deployment of 5G. The petition references the increase in wireless exposure and the need to assess environmental effects before deploying 5G.

“We, mayors and elected officials are immediately proposing a moratorium on the deployment of 5G at least until the summer of 2021. During this moratorium, we are asking for a decentralized democratic debate on 5G and on digital uses. We ask the municipalities for the right to subsidiarity concerning the application of the precautionary principle.”

“The 5G wave emissions are added to those of previous technologies, 4G, 3G and 2G, which will lead to an increase in the level of exposure of the population to the waves. Likewise, it is urgent to question the health impact of the proliferation of hyperconnected objects.”

“The environmental impact induced by digital uses continues to increase, and, with the explosion of uses, the gains expected by the falsely called “dematerialization” have not been demonstrated. …In addition, the deployment of 5G will exponentially accelerate the exploitation of non-renewable natural resources, pollution due to the extraction of rare metals, and the generation of a quantity of waste that can hardly be recycled. At present, a very small number of mobile phones in circulation and on sale are compatible with 5G. The deployment of this mobile network will therefore involve the renewal of a large part of the equipment, further increasing the ecological footprint and the weight of waste, in an attempt to benefit from a technological innovation whose usefulness remains to be demonstrated. A preliminary environmental impact study on 5G is therefore necessary before considering its deployment.”

Link to Petition of France Mayors and Elected officials

A rapidly growing list of governments are investigating 5G amidst the growing awareness of health and environmental impacts. Many are suspending deployment while the issue is examined. Examples include Slovenia, Nigeria, PaPau New Guinea, Belgium, Netherlands, and Australia. Over 415 Cities in Italy, several Cantons in Switzerland, and several municipalities in the United Kingdom and Ireland have passed resolutions to halt the roll out.

There is a large and growing body of scientific evidence indicating that the densification of 5G and small cells will create serious health and environmental impacts due t the increased radiofrequency radiation exposure. Read published research HERE.

This petition from France joins numerous official calls to halt 5G. For example:

LETTERS AND OFFICIAL BRIEFINGS ON 5G

December 7, 2018 – David O. Carpenter, Director, Institute for Health and the Environment, University at Albany, State University of New York – Open Letter to Ministers and Members of Parliament of the Brussels Capital Region

December 13, 2018 – Olle Johansson, associate professor / retired from the Karolinska Institute, Stockholm, Sweden, and the Royal Institute of Technology, Stockholm, Sweden – Letter of Concern, addressed to the decision-makers of the City of Brussels

2019 Letters to the Government of Guernsey

Letter from Dr. Alvaro Augusto de Salles to Mrs. Andrea Dudley-Owen, VP of Health and Social Security, The States of Guernsey, Re: 5G

Letter from Paul Héroux, PhD to The States of Guernsey, Re: 5G

Health Effects of Electromagnetism (Detailed Report) submitted to The States of Guernsey by Paul Héroux, PhD

Letter from Anthony B. Miller, MD, FRCP to Gavin St Pier Esq, Chief Minister, The States of Guernsey, Re: 5G

Letter from Professor Colin Pritchard to The States of Guernsey, Re: 5G

Declaration to European Commission by 180 Scientists Calling For A Moratorium on 5G Cell Antennas, September 13, 2017

Letter from Dr. Martin Pall in Opposition to SB649

Letter from Dr. Cindy Russell in opposition to SB649

Letter from Physicians For Safe Technology in opposition to SB649

Santa Clara Bulletin, pg. 20-23, “A 5G Wireless Future: Will It Give Us a Smart Nation or Contribute to An Unhealthy One?” by Cindy Russell, January 2017

Letter from Dr. Hugh Scully to the City of Toronto

Letter from Dr. Stephen Sinatra to Toronto City Councilors in Opposition to Item 26.21

Joint letter from 541 health, environment and justice advocates and organizations to US Senators and Representatives in opposition to bills on 5G and wireless radiation expansion – 13 November, 2017

The majority of scientists worldwide oppose 5G until studies show that it’s safe. Since 2018 there have been reports of people and animals experience symptoms and illnesses after it was installed (see 1, 2, 3, 4). Of course other sources of wireless radiation and Electromagnetic Fields (aka “Electrosmog”) can cause symptoms and illnesses too. LAST YEAR the World Health Organization issued a warning about a significant percentage of people being affected by exposure.

5G opposition isn’t isolated to increased radiation risks (see 1, 2, 3, 4). For one thing, experts predict it will cause millions of people to lose their jobs.