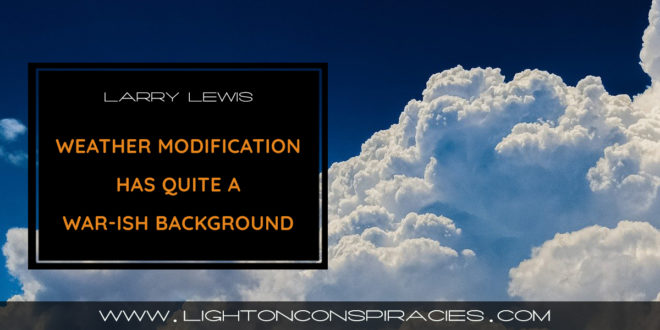 Weather Modification Has Quite a War-ish Background Are there specific instances we can find of weather manipulation being used by militaries against their opponents? To begin our discussion, let us first look back to 1946 when the first man-made snowstorm took place.

The beginning of weather modification

Shortly after the end of World War II, a duo of men set to the skies. One was pilot Curtis Talbot, and with him was Dr. Vincent J. Schaefer. The two men set out to 14,000 feet with just one goal in mind: they were going to make history.

Upon reaching their desired altitude, the men proceeded to release three pounds of dry ice into the air. What happened next would leave both of the men dumbfounded. As Dr. Schaefer said of the moment, there were “long streamers of snow falling from the base of the cloud through which we had just passed. I shouted to Curt to swing around, and as we did so, we passed through a mass of glistening snow crystals! Needless to say, we were quite excited.”

The men had just created snow.

The ramifications of this were huge, but there was something even more important to consider here: the timing was impeccable as well.

As things heated up between the Soviet Union and the United States, the world was constantly kept hanging on the brink of a nuclear war. What exactly this would entail was filled with much speculation (and still is), but there was one thing that there was no debate on: the prospect of nuclear annihilation was terrifying.

Striving to gain an edge over the Soviet Union, America began a very thorough dive into the possibilities of weather manipulation to defeat the Soviets.

It was theorized that the use of weather warfare could result in outcomes even more deadly than that capable by nuclear warheads.

As Dr. Irving Langmuir would say of seeding clouds to create rainstorms, “The amount of energy liberated, the effect of 30 milligrams of silver iodide under optimum conditions equals that of one atomic bomb.”

But it wasn’t just the creation of rain that was theorized as a potential use of weather warfare. Strategies were crafted to melt the ice caps in certain regions to cause massive flooding, and one Russian scientist even theorized a way to redirect Pacific Ocean waters so that the ambient temperature in New York could be increased.

But it wasn’t until the Vietnam War that weather warfare would see its debut.

“I love the smell of rain in the morning.”

Throughout the Vietnam War, American men found themselves fighting against a fierce and determined enemy that seemed invisible. The dense jungles made it so that the 12-gauge shotgun was often a preferred primary weapon, and men rarely got the chance to see just where the incoming rounds were coming from.

The war was getting messy, and things weren’t getting any better with the anti-war/peace movement back home on American soil. Vietnam had quickly grown to become the most unpopular war in American history, and it needed to be ended as quickly as possible.

A soldier operates on a full stomach, though, and no modern army can fight without ammunition. If the supply lines could be cut off for the North Vietnamese Army (NVA), then perhaps the Vietnam War could be brought to a hasty close. The bulk of NVA materiel seemed to be coming in from the Ho Chi Minh Trail. If that could be cut off, victory would quickly follow.

Rain creates mud, and mud makes it difficult for wheeled vehicles to maneuver. If excessive rain could be created in the area, any hopes of transporting ammunition and food through the area could potentially be stopped almost completely.

And so, American planes began flying over the area, seeding the clouds with silver iodide with the hopes of creating torrential downpours. Roughly three million dollars were spent on these efforts, with the end result allegedly being an additional 1-7” of rain/year. However, this is a debated number as, also allegedly, no data was ever collected on how effective the program was.

Regardless of whether or not the program worked, though, the fact remained: this was the first military use of weather modification in history.

(For information on how to starve the beast, make sure to check out our free QUICKSTART Guide.)

This possibility proved to be too terrifying.

Public outcry against the use of weather warfare was so prevalent that shortly after the Vietnam War was over, the US signed the Convention on the Prohibition of Military or Any Other Hostile Use of Environmental Modification Techniques in 1977 in Geneva.

A host of nations ended up signing the treaty (with the glaring omission of China), and the idea of weather warfare being the modus operandi of the future quickly drew to a close.

But there were a few flaws.

For starters, the treaty only banned the use of weather modification techniques being developed for “military or hostile” purposes. If a country was researching how to modify the weather to cause rain in their own nation so that they didn’t have a famine, they would technically be abiding by this treaty. Also, “temporary” weather modification was permitted by the signed treaty. Provided one wasn’t engaging in geoengineering that would permanently transform the earth, one was given the green light to proceed with their research.

It was during this year that Unrestricted Warfare was published by two colonels. Within the text, the authors acknowledge that weather modification is a valid means of engaging an enemy during a time of war.

As the authors state, “It cannot be denied that man-made earthquakes, tsunamis, weather disasters, or subsonic wave and new biological and chemical weapons all constitute new concept weapons…”

Yes, you read that right.

This truly isn’t that novel of a concept, however. The first man-made “earthquake” was created by the physics mastermind Nikola Tesla. In 1897, ambulances and police were actually called to Tesla’s laboratory after he managed to successfully cause his entire building to sway enough that people actually thought an earthquake was happening.

And Tesla accomplished this with a machine that easily fit into his pocket. Tesla would later go on to admit that the fear of an earthquake at a nearby construction site was actually due to his testing out his new piece of machine after he hooked it up to an unfinished steel structure. He would later state that given ten more minutes, he would have brought the entire building to the ground.

The notion of weather warfare, or “ecological warfare,” as the authors of Unrestricted Warfare prefer to call it, has been thoroughly hashed out. Ideas for influencing the natural height of rivers, ice sheets, ice caps, and more have all been discussed.

But why not darken the sun?


Perhaps the most recent talk we’ve seen on weather modification (and we’ll leave this to the reader’s discretion if this is warfare capability or not) is Bill Gates’ funding of the darkening of the sun. In 2021, it was revealed that a group of scientists from Harvard University was working on a project called the Stratospheric Controlled Perturbation Experiment (SCoPEx) – a literal plan to darken the sun.

The plan revolves around the idea of spraying calcium carbonate into the sky. The hopes are that this will reflect sunlight back into space, helping to “alleviate climate change.” This, despite it being admitted that “it is true that no one knows what will happen until the calcium carbonate is released and then studied afterward.”

As of 2022, this plan to darken the sun is still in play, with the technical name being given to this technology being solar radiation modification (SRM). Though the stated goal is to “battle climate change,” researchers across the globe have pointed out that any attempt at SRM carries the very real threat of causing a lack of rain in particular parts of the world.

Though not being developed with the stated goal of any “military or hostile use,” SRM possesses the very convenient characteristics of not only being permanent (as far as we know) but of being able to cause widespread famines as well.

Can famine in an enemy nation benefit the opposing force during a time of war?

What does the future hold? What weapon has ever been created that has not been used? Where will this lead?

Only time will tell.

“Today’s wars will affect the price of gasoline in pipelines, the price of food in supermarkets, and the price of securities on the stock exchange. They will also disrupt the ecological balance and push their way into every one of our homes by way of the television screen.” – Alvin Toffler.