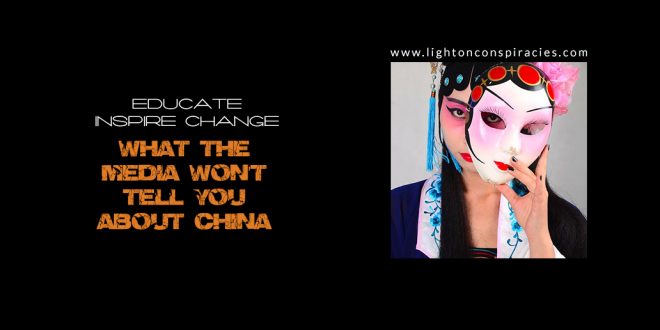 What the Media Won’t Tell You About China

So I recently stumbled an excellent unbiased video on YouTube titled ‘What the Media Won’t Tell You About China’ and as I do with many videos I read through the comments first to get an idea of the general opinion about the video. So before I share the video with you I will post some of the more telling comments below:

”I have lived and worked in China for many years. What I see is different than what the West portrays. I see people working hard, building things, making things, saving, raising children, and spending go-gobs of their hard earned money educating them (which is why I have a job here). I see kindness and thrift daily. I see in the eyes of the elderly people a certain amazement at the progress that has been made in the last 30 years – many are stunned at the level of accomplishment. I can go days without seeing a police officer and when I do they aren’t carrying guns nor are they dressed like Army Rangers on deployment in a combat zone. The streets are NOT full of diseased poor refugees and hungry homeless beggars, they are full of people rushing to work, or going shopping, or playing with children. At night older ladies walk into certain public places, plug in a boom box, and dance in unison to get exercise and chat. The streets in the middle class areas are full of carts selling shao kao (fried meat on a stick), fresh fruit, or all manner of items. China hasn’t gotten around to throwing all these merchants into prison for selling ‘without a license’ or such like the enlightened West. I lived in Washington D.C. for many years and the people here are far freer than anyone in the States although you certainly won’t hear that from CNN. There is no such thing as “SWATing” here nor are no-knock break ins and random shootings of children by police common because … I don’t know what’s the excuse this week? War on…? I am amazed that the average rank and file Chinese person isn’t spitting mad at the US and England given the history they’ve had to endure yet they are willing and even happy to deal with us. They are a smart, savy people so I very much understand that a lot of this is admiration mixed with fear, but how would the rank and file US person react to visiting Chinese if China had shelled our major port cities and flooded North America with drugs for many decades in the recent past? I teach high school math here and the students are some of the most hardest working I’ve ever encountered. By the end of Senior year I have them doing basic differential equations and they’ve already mastered Calculus. They can do integration by parts easily and can recite every trig identity including the 1/2 and double angle identities that drove me bonkers. All the while they are striving the West is doing everything it can to dumb down their math programs to the point that basic Algebra is now something you take as a remedial class in college. So yeah… might want to be looking at taking Mandarin lessons guys as comparing the two civilizations it will be a Chinese flag (not a US one) that is first placed on Mars.”

To preview the book click on the thumbnail below:
eBooks (many languages) Paperback
Another comment read:
”Western media are full of lies about China. There is a good reason for China to turn off these malicious media and websites within its own territory. I spent 15 years in the west and the rest in China. I am shocked about the kind of prejudice and hatred against China within the western population, due to the western propaganda misleading the crowd and propagating hatred.”
Another comment read:
”I’ve visited China many times in the past 10 years since I travel a lot for my job. I can confirm first hand that 90% of the stuff western media pushes out against China are made up or greatly exaggerated.”
And finally here is another of the more interesting and relevant comments:
”As someone who is married to a Chinese wife and I spend a lot of time living in China, I can say the truth bears no resemblance to the reports one reads on the BBC etc. and I really appreciate seeing this, because it does throw a spotlight on things people are ignorant about There is so much that has happened to China and so much they have done for the world, for example they were instrumental in helping the British and French win world war one, but who even knows about that??? Just illustrating a point on how things never get reported. I was at the Nanjing Memorial a few weeks back, if you want to see at first hand how badly these people were treated, people should go – a very sobering experience, point is everyone knows about the Holocaust, but Nanjing where far worse atrocities were committed, well people generally have no idea As far as current times are concerned they are committed to the One Belt One Road policy, and despite the best efforts of the US, they are succeeding. However it could spill over into a real war, the freedom of navigation patrols that the US and some of its chums conduct are purely a provocation, designed to antagonise – but I rather think that the Chinese are cerebrally better equipped and as Kim Jong Un said a frightened dog barks louder, so I believe China is more or less indifferent to the US threats”
And now that you have read those here is the video for you to watch and enjoy: