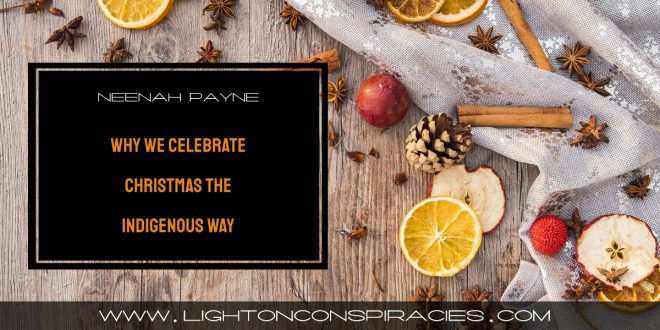 Why We Celebrate Christmas The Indigenous Way America is a Christian nation. Christmas – which commemorates the birth of Christ – is one of the most important celebrations of the Christian religion. However, few Americans stop to think that almost all of the ways in which we celebrate this holiday (Holy Day) have nothing to do with Christianity.

Who is Santa Claus? Why does he live at the North Pole, dress in red and white, fly through the night sky in a sled led by reindeer? Why does he come down through the chimney to bring gifts? Why do we bring in pine trees indoors and decorate them? Why do we hang stockings by the fire place? Our Christmas traditions are based on the traditions of the Sami – an indigenous people in Scandinavia.

Could Magic Mushrooms Explain the Story of Santa Claus? explains that:

The story of Santa flying around Earth on Christmas Eve with his reindeer and sleigh is a Christmas staple popular enough to rival that of Jesus’ birth. But where did the idea of flying reindeer and a stealthy gift-giver squeezing down chimneys come from? One interesting theory claims the answer revolves around amanita muscaria: magic mushrooms.

The Saami are the indigenous people of Northern Europe, a living remnant of the continent’s nomadic prehistory. Now numbering, by most accounts, less than 200,000, they are spread across the northern parts of Norway, Sweden, Finland, and Russia in an area known as Sáami. The northernmost indigenous people of Europe, they are part of the “Fourth World” that spans the North Pole from Siberia to Alaska.

Traditional Saami are reindeer herders whose homes are yurts and log cabins. The thrilling 1987 ski film Pathfinder, the first in the Saami language, documents the story of their founder and shows the similarity of the Saami’s lifestyle and worldview with those of many Native American cultures. Saami survival is dependent on the life and migrations of the reindeer — just as the Plains Indians depended on the buffalo and later the horse. In addition to being a source of food, clothing, and housing, the reindeer serve as means of transportation. Saami use reindeer-drawn sleighs.

Shamans play a central part in Saami life. They reputedly mediate between Heaven and Earth, possess magical powers over wind and other elements, and are able to shapeshift and visit Jábmeájmoo, the Land of the Dead. When Christianity arrived in the High North late in the 17th century, shamans bore the brunt of the combined church-state assault on Saami independence. Their drums were singled out as instruments of the Devil and most of them were destroyed.​

The shamans gather the mushrooms and hang them on pine trees to dry. They put them in sacks and deliver them to each household by descending through the roof since the yurts are piled high with snow. The mushrooms are hung by the fire place to dry — just as stockings are hung on Christmas Eve in much of the US. The sacred red and white amanita muscaria mushroom is eaten on December 21, the Winter Solstice, to commemorate the return of the light and to provide a transcendental experience that is said to lead to enlightenment. Reindeer also like the mushroom and are said to “fly” when they eat it!

Like the Saami shamans, Santa Claus lives at the North Pole, wears a red and white hat and cape, rides magically through the sky in a sleigh driven by reindeer (flying high on the mushroom), carries a sack, and goes down the chimney of each home to deliver gifts for Christmas around the Winter Solstice. We bring pine trees into our homes for Christmas and decorate them – just as Saami shamans put the mushrooms on pine trees. We hang socks filled with gifts by the chimney just as the Saami hang mushrooms by the fireplace to dry. Ho! Ho! Ho!

Santa Claus and our Christmas traditions preserve our connection to our shamanic roots — while hiding and disguising them. However, instead of delivering the magic mushroom which is a pathway to wisdom and enlightenment through direct experiential knowledge, Santa Claus brings gifts we often don’t need or want – and ties us to the material world. It turns a sacred holiday when we could grow wiser into a requirement to shop!

We adopted the form, but lost the meaning of the sacred ceremonies. We have turned Christmas into the biggest shopping season that now includes not just Black Friday after Thanksgiving, but the week before Thanksgiving as well as Cyber Monday (and week) following Thanksgiving. Some Americans go into debt trying to keep up with the demand to give gifts for Christmas – gifts people often don’t need or want. Black Friday has become known for the tragic deaths caused as crowds rush to grab goods at supposedly lower prices. Very little Enlightenment in those traditions.

The mushroom provides the Near Death Like Experiences that lead to transcendence which is prized by shamans and is the root of all religions. The book shows the hidden representations of the mushroom in religious art and architecture around the world. So, while the importance of the amanita muscaria and the Enlightenment it provides are hidden in our Christmas traditions, it is also hidden in much more.

Fantastic Fungi: How Mushrooms Can Heal, Shift Consciousness, and Save the Planet is an Amazon Best Seller.  The Fantastic Fungi film by mycologist Paul Stamets and filmmaker Louie Schwartzberg won the 2019 Audience Award for Documentary Feature at the Maui Film Festival. Watch the trailer, rent, or buy the film at: http://watch.fantasticfungi.com/. The film explains that mushrooms are just the fruit of the mycelia which form a vast underground system of communication all over the world on which the internet was modeled. This network is responsible for the recycling and distribution of nutrients.

Magic of Mushrooms is free on Amazon Prime and shows a wide variety of mushrooms in nature.The fascinating and informative Super Fungi film explains how fungi can help save the world! It features American mycologist Paul Stamets of Fungi Perfecti who is perhaps the greatest ambassador for fungi! The 50-minute film is also free on Amazon Prime. See the trailer on Amazon for A New Understanding: The Science of Psilocybin.

5 Stunning Health Benefits of Medicinal Mushrooms says there are more than 2,000 species of edible mushrooms. The article discusses some of the more common medical mushrooms: Lion’s Mane, Chaga, Reishi, Turkey Tail, Shiitake, and Cordyceps.  However, it points out that even commonly-consumed Button mushrooms are medicinal!

The largest mushroom in the world is armillaria ostoyae — or as it has been nicknamed the ”Humongous Fungus”. Covering 2,385 acres of Malheur National Forest, Oregon, it is the world’s largest organism. From the way the fungus has been growing, it may also be the world’s oldest organism.

Humongous is estimated to be around 2,400 years to 8,650 years old. Scientists mapped the population of Armillaria in eastern Oregon, the genetic material of the fungus, to determine where one fungus started and the other ended. The expanse of the forest and the stable environment has enabled the fungus to spread far. Known as honey mushrooms for their yellow cap and sweet, fruity bodies, they are safe to eat.

The discovery of the giant mushroom has sparked a discussion of what constitutes an individual organism. However, it is agreed that if a being has a set of cells that are genetically identical and communicate with each other, it can be classed as one single organism. So, the blue whale and the Humongous Fungus both fit the bill.

The next largest honey fungus is in the state of Washington. Honey fungus is widely distributed across the cooler regions of the United States and Canada. It is very common in the forests of the Pacific Northwest. These fungi grow in individual networks of above- and below-ground fibers called mycelia. Mycelia work like a plant’s roots. They draw water and nutrients from the soil to feed the fungus. At the same time, they make chemicals that are shared with other organisms in the soil.

Wikipedia says: “One of the primary roles of fungi in an ecosystem is to decompose organic compounds. Mycelial mats have been suggested (see Paul Stamets) as having potential as biological filters, removing chemicals and microorganisms from soil and water. The use of fungal mycelium to accomplish this has been termed mycofiltration. Knowledge of the relationship between mycorrhizal fungi and plants suggests new ways to improve crop yields.

When spread on logging roads, mycelium can act as a binder, holding new soil in place and preventing washouts until woody plants can be established. Fungi are essential for converting biomass into compost, as they decompose feedstock components such as lignin, which many other composting microorganisms cannot. Turning a backyard compost pile will commonly expose visible networks of mycelia that have formed on the decaying organic material within. Compost is an essential soil amendment and fertilizer for organic farming and gardening. Composting can divert a substantial fraction of municipal solid waste from landfills.”

Ayahuasca: The Search For Spirit and Wisdom

The meaning that has been lost in the Winter Solstice ceremonies is now being sought elsewhere.

Americans and other Westerners are flocking to the Amazon to participate in ceremonies with shamans and drink ayahuasca. Some are willing to undergo the demanding experience that includes vomiting for cleansing because they are seeking physical healing they have not found through Western medicine. Others are in a search for meaning they hope to find in the transcendental experiences provided by ayahuasca which are similar to near-death experiences.

People who have consumed ayahuasca report having mystical or religious experiences and spiritual revelations regarding their purpose on earth, the true nature of the universe, and deep insight into how to be the best person they possibly can. This is viewed by many as a spiritual awakening and what is often described as a rebirth. It is often reported that individuals feel they gain access to higher spiritual dimensions and make contact with various spiritual or extra-dimensional beings who can act as guides or healers.

Recently, ayahuasca has been found to interact specifically with the visual cortex of the brain. In one study, de Araujo et al. measured the activity in the visual cortex when they showed participants photographs. Then, they measured the activity when the individuals closed their eyes. In the control group, the cortex was activated when looking at the photos, and less active when the participant closed his eyes; however, under the influence of ayahuasca and DMT, even with closed eyes, the cortex was just as active as when looking at the photographs. This study suggests that ayahuasca activates a complicated network of vision and memory which heightens the internal reality of the participants.

It is claimed that people may experience profound positive life changes subsequent to consuming ayahuasca, by author Don Jose Campos and others.

Don Jose Campos is the author of The Shaman and Ayahuasca: Journeys to Sacred Realms. The Amazon description says:

Along with Don José’s ‘transmission,’ we meet Pablo Amaringo, the world famous visionary painter who talks about his art and his experiences as a shaman. This is the perfect book to introduce you to the profound experiences of Ayahuasca.

The Shaman & Ayahuasca: Journey to Sacred Realms is available on Amazon Prime. The Ayahuasca Visions of Pablo Amaringo by Howard C. Charing contains 47 of the legendary painter’s works. See more about the extraordinary work of Pablo Amaringo.

Share
Previous WHO Deletes Naturally Acquired Immunity From Its Website
Next Gemma O’Doherty: Today They Were Forced To Admit That ‘Covid-19’ Does Not Exist