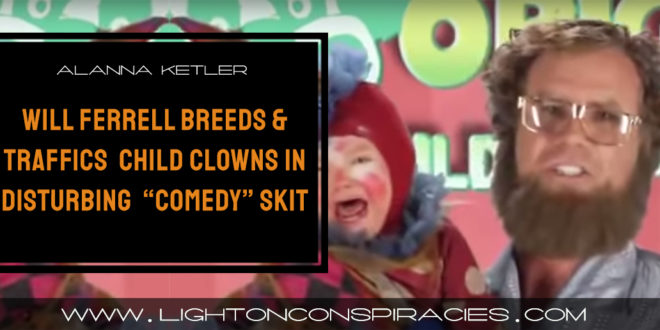 The following video skit, produced by none other than Cartoon Network’s Adult Swim featuring Will Ferrell, is vulgar, confusing, and disturbing. At least this is how I felt seeing it. The skit aired on national television and made me wonder if this is a blatant in-your-face confirmation of the dark secrets behind what really goes on in Hollywood when it comes to child trafficking and ritualistic child abuse.

One note before we go on, I will lay out what happens in this video, provide some odd examples of what to look for, and then end off with an important note on child trafficking and abuse from someone who has been an abused child within these circles. Her healing story is incredible.

We of course don’t know for sure how connected Will Ferrell himself is to child trafficking organizations, but whether he is or not, he still actively participated in this skit. One might wonder how someone who is a father himself could be able to participate in such a video, especially given he likely has knowledge of how extreme Hollywood pedophilia and child abuse is.

Following ideas brought forth by many about why videos like this are made public, researchers have alleged that secret societies follow sets of rules. Part of the reason why a video like this would be made public is to gain consent from the population for this type of stuff to happen and continue. But you can decide for yourself by watching the video below.

Please be advised, the following video is may be disturbing to you.

You may wonder how is this type of thing even allowed to happen? How is it on YouTube yet Collective Evolution’s content on questioning vaccines gets banned? One might think there would be some sort of community standards on YouTube that may ban such things. It appears this hasn’t happened as this video is all over YouTube, with millions of views. Does what they want to be seen always get seen?

To me, the following video is a prime example of hiding in plain sight. Child trafficking, child abuse and pedophilia are so blatant and obvious to see, yet they remain industry secrets and almost completely fly under the radar. It is happening on a massive scale across our entire globe, but most would rather turn a blind eye than to accept and admit that this is even occurring.

Take for example the following from The Vigilant Citizen. Look at the images and the key takeaways below.

Ferrell beats the crying clowns with a hammer while the other ones are trapped in cages. So funny.

At one point, Ferrell holds an actual crying baby and says: “I made him, he’s fresh! I might have to bury him in the back if he keeps acting like this.”

Later, we see an actual child inside a cage.

Another actual child eats trash that was thrown on the floor.

Another kid struggles as he is forced to perform.

Then there’s a funny joke about keeping them sleep-deprived by blowing a horn at them.

Then there’s a funnier “joke” about how this guy “touched a clown”.

The Vigilant Citizen goes on to say that the only people that will find child abuse funny are those who are abusing children. So, one might wonder, who was this video actually made for and why?

Perhaps few and far between, there are people who are trying to raise awareness about child abuse. An Open Secret is an American documentary film directed by Amy J. Berg exposing child sexual abuse in the film industry in California. The film features interviews with victims who were targeted when they were young boys as well as industry figures, the predators themselves, and journalists.

Currently, Feldman is working on his own documentary feature titled, Truth: The Rape Of Two Coreys, which is about the two industry men who allegedly molested him at the age of 14 and the A-listers and others who allegedly raped or molested his best friend. “We’ve got about seven [people] who were told firsthand that this person raped Corey,” Feldman says, “and they’re all being interviewed.”

Anneke Lucas is an author, speaker, advocate for child sex trafficking victims, founder of the non-profit organization Liberation Prison Yoga, and creator of the Unconditional Model.

Her work is based off her 30-year journey to restore her mental and physical wellbeing after surviving some of the worst atrocities known to humankind before the age of 12. Sold as a young child into a murderous pedophile network by her family, she was rescued after nearly six years of abuse and torture.

She is one of many victims of elite-level trafficking.

We recently conducted an interview with her. Below is a clip from the four-part series, as it was a very long and detailed interview. You can access the full interview HERE on CETV, again, it’s a platform we created to help combat internet censorship and allow us to continue to do our work and get the word out about various issues and topics.

For some, it may be easier to dismiss this information as a mere conspiracy that has no validity. It can be easier to turn a blind eye than to actually accept that these super unfortunate events are taking place right under our noses. Sometimes people will view this as ‘negative’ and thus push it aside, ultimately allowing it to continue by not wanting to come to terms with it and come together to do something about it.

Cognitive dissonance can also be a factor in these situations, but once you begin looking into this, it becomes very easy to see. As Jordan Maxwell (considered to be the world’s foremost authority on ancient religions and modern conspiracies) says, “The more you know, the more you see.” If we aren’t going to speak up for these unfortunate events taking place in our world, who will?

Many of us are aware of the #MeToo movement, but maybe it’s time to start a #KidsToo movement as well?

Be sure to watch our 4 part interview series with Anneke Lucas to learn how one can heal from these experiences and what we can take away from this as people.