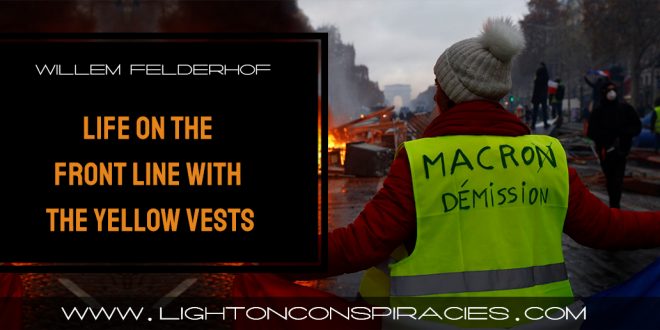 Willem Felderhof – Life On The Front Line With The Yellow Vests

We discussed: how whilst the Yellow Vest movement in France officially launched on November 17 2018, its’ genesis goes all the way back to 2013; how the Yellow Vest movement is a grass roots movement and not controlled opposition; why you don’t see many immigrants in the Yellow Vest movement; the barbarity of the militarized French police who have seriously injured over 400 Yellow Vest protesters so far; the specialized police units that are Israeli trained, making the situation in France appear similar to the situation in Gaza; how the French People are waking up to the fact that the Elite do not represent their interests; the deliberate infiltration of the Yellow Vest movement by violent Antifa groups for the purpose of demonizing the movement in the mainstream media; the manifesto of the Yellow Vest movement that has been ignored by the French government who refuse to debate them; why we never see the real controllers operating from behind the curtain; why we need to look at what happened to White Christians in Bolshevik Russia, if we want to see the horrendous fate that we are facing today; Willem’s article, “Le Grand Taboo – The Talmudic Stranglehold Of France That No One Dares To Talk About,” from his Dutch Anarchy website; the, “Post-Truth World,” that was the final agenda item at the 2018 Bilderberg meeting; and many other topics.

Click Here For Willem’s Article, “Le Grand Taboo – The Talmudic Stranglehold Of France That No One Dares To Talk About,” From His Dutch Anarchy WebsiteClick Here For The Andrew Carrington Hitchcock Show Archive Where You Can Listen To Or Download All My Shows

Share
Previous The Brutal Truth About the CARNET: The Venezuelan Biometric ID Also Known as the Fatherland Card
Next In Loving Memory Of Dr. Rauni Kilde