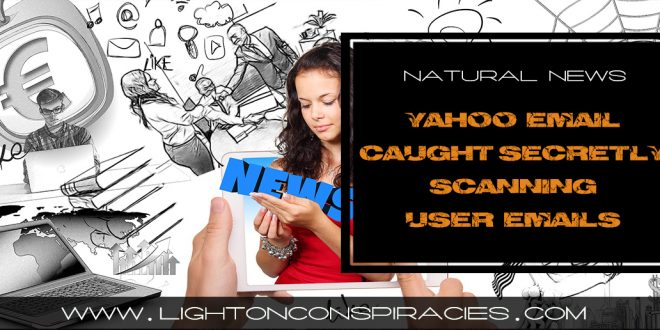 We all know that tech companies collect our data and use it to make money through advertising. In fact, it’s gotten to the point where we pretty much expect the things we search for and the sites we visit to be used for these purposes. However, if you use Yahoo Mail or AOL Mail, even your email is no longer off limits.

The owner of Yahoo Mail and AOL mail, Verizon, is offering a new service for advertisers that involves constantly scanning the 200 million inboxes of those who use Yahoo Mail. Verizon reportedly told advertisers they search people’s emails to find clues about the goods and services they might be interested in buying.

PJ Media reports that those are the only two email services that are selling their users out in this way at the moment. Gmail used to scan emails but stopped doing so entirely last year. That might make them sound superior somehow, but the reality is that Google is getting more than enough of our personal data through other means, so it has no need to scan emails, too.

According to the Wall Street Journal, Yahoo reached a settlement in a federal class-action lawsuit in 2016 that claimed its email scanning was a violation of federal wiretap laws. They  paid out $4 million and although they did not admit to any wrongdoing, they were forced to make a technical change wherein people’s emails would be scanned once they’ve arrived in their inbox instead of while in transit.

According to communications between Verizon and advertisers, they placed their users in different categories according to the mail they receive. For example, getting car loan notifications makes people part of the car owner group, brokerage trade confirmations earn someone the investor label, and flight confirmation emails mean a user will be considered a frequent traveler. Taking it one step further than Google did in the past, they then create interest profiles of each user, follow them across the Internet, and deliver appropriate ads when they visit other sites.

Doug Sharp, the Vice President of Data, Measurement and Insights for Oath – the Verizon brand that acquired Yahoo Mail – stated: “Email is an expensive system. I think it’s reasonable and ethical to expect the value exchange, if you’ve got this mail service and there is advertising going on.”

While you could argue that users can’t expect to get something like email without paying for it in some way or another, this practice is even used in Yahoo’s premium email service, which users shell out $3.49 per month to use. There is a way for these users to opt out of the analysis, but it isn’t immediately obvious as the setting is listed under Ad Interest Manager rather than Settings.

It isn’t just an algorithm that is scanning through people’s emails; human readers are also used to look at AOL and Yahoo emails. This is outlined in Oath’s privacy policy, but few readers actually take the time to look at the fine print.

Yahoo doesn’t know how to hold on to users

Yahoo Mail has seen its popularity dwindle in recent years as people flock to Gmail despite Google’s abhorrent practices. These days, a lot of people use Yahoo email as a spam account to collect unwanted emails sent out by retailers, and this is what the advertisers are hoping to capitalize on. Nevertheless, just 19 percent of people aged 18 to 29 use Yahoo Mail, whose reputation has also been hurt by several high-profile data breaches. It’s unlikely that this approach will help them earn back any of the goodwill they’ve lost in recent years.

Previous ‘Perfectly Healthy’ Man Dies After Flu Shot, Doctors Admit To Covering It Up
Next Ole’s Daylight: Be the Change You Want to See