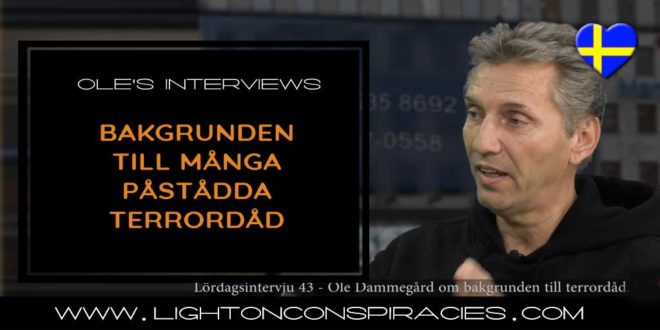 Summary: Ole Dammegård has examined lots of places where terrorist acts have been committed, but has never encountered anything that really indicates religiously motivated acts. According to Ole, this has always been about state-financed terrorism. He believes that fear is an age-old tool for gaining control of populations and that the result of terror is that fearful citizens ask for and accept increased control. End of summary. Ole Dammegård was originally a criminal reporter but has devoted his career to investigating various terrorist events. He goes out on a limb when he claims that terrorist acts are not what they seem to be. When it comes to this type of crime, it is more important to think about what is not said than what is actually said through established channels. He begins the program by explaining what is meant by the term “False Flag Operation”. According to Ole Dammegård, this is a concept that was already used by the ancient Romans to establish a moral right to carry out an attack. The result of the terror attacks is that people turn to authority and ask for protection, which means increased monitoring, bugging, scrutiny of bank accounts and other areas of ordinary people’s lives. He says that he has visited lots of places where terrorist acts have occurred to find facts about these events through analysis, testimonies, search of records etc.. In his opinion there is a lack of investigative journalists assigned to do this job. He has lived in Spain for more than 20 years where he fled after two of his colleagues in a private investigation of the murder of (Olof) Palme had been murdered. He has participated in more than 500 interviews on radio in different countries and has lectured in 13 countries about his conclusions regarding terror. According to Ole, fear is an age-old tool for gaining control of populations. The result of terror is that citizens demand and accept increased control so that a small number of people gain complete authority. One result of the terrorist attacks is that the banks and the US have been able to tighten control over money flow. Ole believes that this has been one of the aims of these events. Fear can also be generated about swine flu, ebola, zika virus and similar. It is often said that terrorist acts are connected to religion, but Ole Dammegård believes that it has never, in any of the cases he has examined, been about religious acts. However, there is always a scapegoat and someone who poses a threat. Previously, there were people from the Soviet block, but today there are Islamists who may pose this threat. A threat intended to make us ask for more protection, according to Ole. He has never encountered a Muslim terrorist in these contexts. It has always been about state-financed terrorism. Ole explains that the reason why control through fear is so fundamental is because it is so much more effective. It is easier to rule through fear than to rule by seducing with positive goals. Ole also goes through the formation of secret defense networks in western countries after World War II. In Sweden, this was called “Stay Behind”. The network had important executives as members, and they would work underground and in exile to counteract any attack. This network, according to Ole Dammegård, was involved in the murder of Olof Palme. He has described how this was done in his book “Coup d’etat in Slow Motion”. He says that the Swedish media have not been interested in knowing what he or foreign investigative journalists have come up with regarding the Palme murder unless they point suspicion at Christer Pettersson. The media are controlled from above in a way that does not address sensitive issues. As an example, he points out that we are moving towards the “cashless society”, which means that we leave control of our lives to the banks. Finally, he explains that, to a large extent, all senior executives are under the control of different lobby groups and unknown power brokers. Ole mentions that an external person participated in TV4’s internal meeting to assess sensitive publication. We have confirmed that MSB (a Swedish Government agency) today exerts this form of influence on sensitive reporting by SVT, Sveriges Radio and TV4. In January this year, (the news site) Samhällsnytt reported mail switching between TV4 and MSB in order to reconcile attitudes in the reporting. ————- Support Swebbtv in several ways: – Send your tips or suggestions for “submitted clips” to [email protected] – Make translations of programs into English. Send mail if you are interested – Look at all our programs on our website www.swebbtv.se and tell others – Support financially at Swish 123 535 86 92 (N.B. New), or bankgiro 147-0558. You can also donate directly or as a monthly donor on bank account 9235-229 1186 (9235 is the clearing number). Many thanks for your support !!!