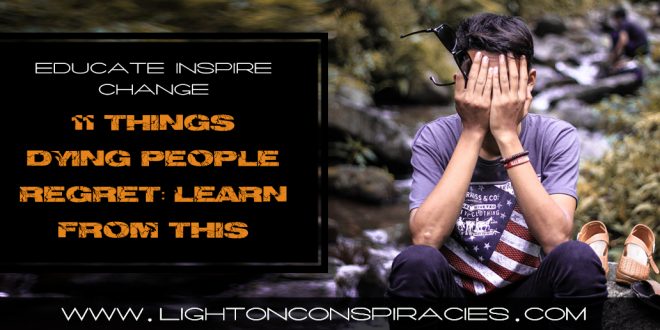 If you ask me what I am afraid of I would have to answer ‘regret’.  When I hear all the things that old people and dying people regret the most it really drives me to not put myself in the same position. That’s why this article is so important and sharing it is even more important.  Don’t live a life of what if’s or could be’s. I would much rather die failing but trying than never failing but never even trying.

Save this list and keep it close to you. It will serve you well.

1. Not traveling when you had the chance.

Travelling becomes infinitely harder the older you get, especially if you have a family and need to pay the way for three-plus people instead of just yourself.

2. Not quitting a terrible job.

Look, you gotta pay the bills. But if you don’t make a plan to improve your situation, you might wake up one day having spent 40 years in hell.

3. Not realizing how beautiful you were (and are)

Too many of us spend our youth unhappy with the way we look, but the reality is, that’s when we’re our most beautiful.

4. Staying in a bad relationship.

No one who ever gets out of a bad relationship looks back without wishing they made the move sooner.

5. Not taking care of your teeth.

They go fast if you don’t take proper care. It’s easy to brush and yes, even floss.

6. Not getting over things fast enough.

Old people look back at the long periods spent picking themselves off the ground as nothing but wasted time.

8. Not paying attention when learning things, especially in class.

Learning is a wonderful thing and knowledge is power.

9. To be able to make food and specifically not learning how to cook at least one awesome meal.

Knowing one drool-worthy meal will make all those dinner parties and celebrations that much more special.

10. Not taking risks. (Especially in love)

Knowing that you took a leap of faith at least once — even if you fell flat on your face — will be a great comfort when you’re old.  Remember it’s better to try and fail than never try at all. In fact I don’t even like the word ‘fail’ In my mind I either win or I learn.

11. Not stopping enough to appreciate the moment.

Stop, breathe and take it all in, even if just for a second.

Founder and Editor of EducateInspireChange. I created EducateInspireChange (EiC) in 2012 to help keep people informed , to encourage people to expand their consciousness and to inspire people to reach for their dreams. I believe that to create real positive change in this world we need to first change ourselves, this might mean living more sustainably, eating more healthy, understanding yourself better…ultimately anything that improves your state of mind as this will help to make the world a better place.