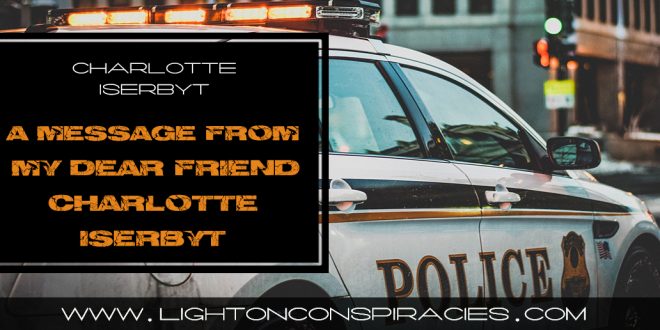 A message from my dear friend Charlotte Iserbyt

This morning two guys in neat-looking sweat suits with some unidentifiable labels on shirts, banged on my back door, and I, now being careful about who I invite into house, asked them who they were. They hesitated, like I was supposed to know they were from the Lincoln County Sheriff’s office! They asked where Sam was, and I knew I was stuck so pointed to apartment…didn’t have time to warn Sam on phone.

Next thing…about 6 cop cars arrive, and about 10 cops get out and surround apartment; next thing I see is them dragging Sam out of his apartment, and him struggling on the ground; they finally pull him up and I see blood streaking down his face. I run out, in my bathrobe, in unplowed driveway, screaming “take your hands off him, leave him alone…haven’t all of you done enough to destroy his life and that of his family…put me in jail, but not him. I will pay you to put me in jail. Leave my son alone.” I muttered about the two attempted murders supported by and carried out by the corrupt District Attorney’s office and some police officers in Portland. I guess I was in hysterics. It was so sad to see Sam being treated that way, and not being able to do anything about what was going on.

Well, they throw him into cruiser, and off to Twin Bridges County Jail. The sheriff and another officer try to calm me down and ask if I want to talk to them. I finally said OK, and gave them the entire history of their pursuit of Sam for reasons we suspect but are not sure about. I told them how much respect I had for the very few traditional police/detectives in Portland, without whom I could never have survived the past three years, those who told me exactly what happened Memorial Day 2016, who were in charge of PPD police report; those on the ground that evening.

Sheriff and other officer were very polite and tried to be comforting, under circumstances, saying they would get Sam back to house today. I explained Sam’s and my background, starting with my working for airmen on Guam during Korean War, for several Ambassadors, having written books and on You Tube telling the truth about how Sam and I, since he was 14, had been working together to maintain U.S. Constitutional form of government; that we were neither Republican or Democrat. Told them how I gave up a $85,000 a year job as Sr. Policy Advisor, US Dept. of Education, under Reagan when I had access to documents which indicated goal of education was to “train our children for a planned socialist economy” aka that in the USSR, Cuba, China, etc. (basically Soviet polytechnical education) using computers, which would deny them any choice in their futures. They were listening. Said “under Reagan”? Guy, not sheriff, said he had voted for and named his daughter after Reagan. I said both parties same at the top and had quote from Professor Quigley, CFR, in Tragedy and Hope, which proves that is true. Said Sam and I have been working against global government since nineteen seventies when I started the Maine Conservative Union, the only truly conservative (not Trotskyite) group state ever had.

I told them how upset Sam was about the pedo situation in Maine and what had happened to Handrahan and who, VERY HIGH UP (go figure) was involved in creation of problem and coverup, etc., and about how Sam’s problems may have been (not sure at all) due to his trying to protect a child from similar abuse. They were very interested in this. One of them asked me for Lori’s last name.

I was so shook up and, I guess they were as well, that no one discussed why Sam was being dragged out of his house. Finally I asked why are you here? And they said he was under arrest for assault! I said “What assault?” Evidently, when Sam called Sheriff’s office two weeks ago and asked to talk to police regarding the past three years and its toll on us, and they finally arrived, and instead of listening to him, tried to throw him in a cruiser, putting hand and ankle cuffs on him which hurt his damaged leg (hospital malpractice in second surgery), he resisted and I don’t know what he did, but Sam has never assaulted anyone in his life. We had no idea Sheriff’s office was going to arrive ten days later with assault arrest, since that night they took him that night to Midcoast Hospital (Emergency). They asked me to follow which I did, and for me to give “whoever” at Emergency Desk Sam’s background, etc. which I dutifully did upon arrival at Midcoast. Gal at desk said to me that maybe I didn’t want to see Sam at that particular time since he was out of control and thrashing out at medical people, but I decided to go into room where he was being restrained with ankle and handcuffs, and where I guess they had given him a big shot of something to calm him down. When I arrived he was lying on table , very angry about the cuffs which hurt his leg, and pleading with one of big guys to release them. They were on orders to keep him constricted like that for at least half an hour. One of guys was a veteran from Afghan War and only doing what he had to do, able to calm Sam down a bit due to their both being vets. I left room and waited outside in corridor, asking for them please to release the cuffs, but told couldn’t do so until exact time…whatever. Finally about an hour later I looked in room and Sam was sleeping and I was told I could go home and that Sam would be released next day.

Tall blonde gal (psychologist) called me in morning and said: “We are sending Sam back in a taxi”. She also said “everything you told first person you spoke to upon arrival regarding Sam and his background and behavior conforms exactly with what he told me. Sam is not a threat to anyone.”

So, that is where I am at the moment. I didn’t realize I was having horrible diarreah while the guys were talking to me in living room. All my guts were emptied…only noticed that later, and don’t think they knew how sick I was.

Oh, how I wish we could live in a normal country. I now don’t trust anyone in government since we have lost our Constitutional Rights. I told them I would prefer the old Soviet system where they just shot opponents to government, or sent to Gulag, didn’t put them through psychological warfare, “no closure” torture.

We were both looking forward so to Thanksgiving with you and family tomorrow.

I wish I could burst out crying, but tears are, I guess, waiting for later. I can feel them backing up behind my eyes, in line, like little soldiers.