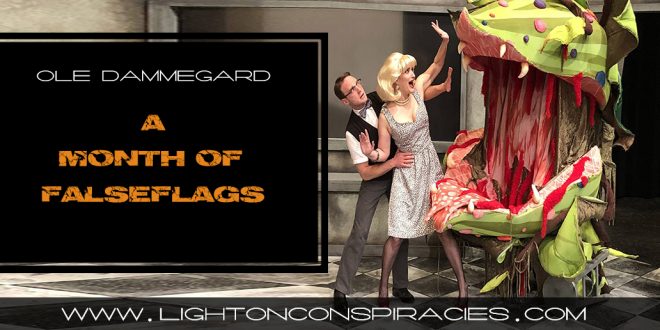 A Month of FalseFlags

September newsletter has just been sent out and as always packed with photos, videos and much more…
Some of the headlines here.
• THE ITALIAN MORANDI BRIDGE ‘COLLAPSE’
Was it an accident, a badly repaired bridge – or state-sponsored sabotage?
• ANOTHER PARLIAMENT CAR ATTACK, UK
An official video of how it happened. Please notice all other vehicles.
• CHINA’S FIRST VEHICLE ATTACK
• PREDICTED MANCHESTER ATTACK, UK
On August 11, I warned about a possible upcoming falseflag. And on the very next day August 12; ‘an attempted multiple murder’
• LONDON KINGSBURY TUBE SHOOTING
• THE GREENWICH HAMMER ATTACK
• QUADRUPEL CAMBERWELL STABBINGS, UK
• THE JACKSONVILLE GAMER’S SHOOTING
Yet another ‘lone crazy guy’ shooting in Florida
• SEVERAL ALLEGED ATTACKS IN FRANCE
• MORE SHOES – THE ICON OF DEATH