Brooklyn Grange in New York City is the largest rooftop farm in the world. The 2016 book The Farm on the Roof: What Brooklyn Grange Taught Us About Entrepreneurship, Community, and Growing a Sustainable Business tells the story of its founding and operation. 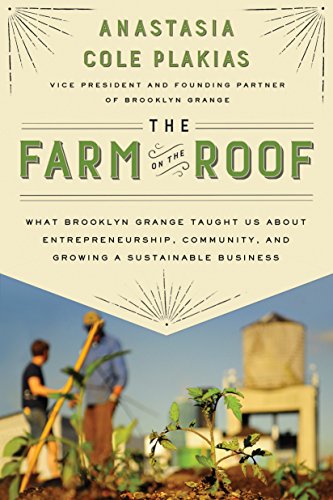 Ben Flanner is the Director of Agriculture, CEO, and co-founder of Brooklyn Grange. “Ben Flanner is co-founder and CEO of Brooklyn Grange Rooftop Farm. Ben’s early days gardening began at a young age, alongside his mother in their Wisconsin backyard. After earning his BS in Industrial Engineering from the University of Wisconsin, Ben moved to New York City, where he began a promising career in management consulting and financial marketing, notably at E*Trade Financial. But his desire to engage more with community than numbers–and more parts of his body than his brain–drew him to the world of food and farming.

He is widely considered a pioneer for his groundbreaking model, which adapts existing green roof technology to intensively cultivate vegetables, beginning with Eagle Street Rooftop Farm, a pilot project on a 6,000 square foot Brooklyn roof, which Ben co-founded in 2009. A year later, in 2010, Ben and his partners scaled up the model and, in 2010, launched Brooklyn Grange, a commercial-scale urban farming business, eventually expanding to 2.5 acres spanning two roofs.

Ben directs all agricultural endeavors on the farm, he brings his system optimization background to bear, making sure the business remains as fiscally sound as it is ecologically healthy. He has presented his work to audiences including NYU Stern Business School; Central European University; Northeast Organic Farming Association (NOFA); Slow Money; Barcelona’s Smart City World Expo; MAHA Agriculture Conference in Malaysia; The American Farm School in Thesaloniki, Greece; numerous Northeastern Horticultural Societies, and has been a guest expert on dozens of panels and university classes.  He has taught urban agriculture courses in multiple cities in North America, and a course in the Environmental Studies department at New York University (NYU).

When he’s not meeting with soil scientists to develop a better growing mix or tinkering with a fussy irrigation pump, Ben can be found whipping up a batch of his homemade bitters, or lacto-fermenting whatever is in season at his Crown Heights, Brooklyn apartment.”

“The founders of Brooklyn Grange, the world’s largest green rooftop farm, share their inspirational story of changing the world through entrepreneurship. In their effort to build the world’s first and largest commercial green rooftop farm, the founders of Brooklyn Grange learned a lot about building and sustaining a business while never losing sight of their mission—to serve their community by providing delicious organic food and changing the way people think about what they eat. But their story is about more than just farming. It serves as an inspirational and instructional guide for anyone looking to start a business that is successful while making a positive impact.

In The Farm on the Roof, the team behind Brooklyn Grange tell the complete story of how their “farmily” made their dream a reality. Along the way, they share valuable lessons about finding the right partners, seeking funding, expanding, and identifying potential sources of revenue without compromising your core values—lessons any socially conscious entrepreneur can apply toward his or her own venture. Filled with colorful anecdotes about the ups and downs of farming in the middle of New York City, this story is not just about rooftop farming; it’s about utilizing whatever resources you have to turn your backyard idea into a sky-high success.”

Brooklyn Grange is a short walk/bus ride from my apartment. I took an official tour a few years ago which cost $10 and included a tour of the greenhouses and a visit to the beehive and chicken coop.

I bought some Brooklyn Grange honey. In August, when I helped at a food pantry in the Navy Yard where Brooklyn Grange is located, I visited the roof farm with friends and I took these photos. My article Multiple Ways To Handle Food Insecurity Now includes the trip to the food pantry.

“You may have heard the news that we recently commenced operations of The Farm at Javits (see video), a one-acre farm, four-season greenhouse, and 10,000 square foot orchard – all on the roof of the newly-expanded convention center on Manhattan’s West Side. It’s hard to know where to begin sharing the noteworthy features of this farm! We could gush about the 344,000 gallon underground cistern that will allow us to capture and recycle rainwater, mitigating combined sewage overflow and reducing our irrigation use. We could talk till we’re blue in the face about the crop plan we designed collaboratively with Javits’ catering team, CULTIVATED.” “Way atop New York City’s massive convention center is a one-acre farm and a 10,000 square foot orchard that grows fruit. You wouldn’t know it to look at the Javits Center, but it’s now home to a green roof farm that will grow up to 40,000 lbs of produce per year.

Brooklyn Grange, the New York City-based rooftop farming, design/build, and events business, is working The Farm at the Javits Center, which has a one-acre green roof farm, an all-season greenhouse, a 10,000 square foot orchard and food forest with dozens of fruit-bearing trees, and a 344,000-gallon underground cistern for recovering and recycling rainwater runoff.

The farm has 18 inches of agricultural soil, 32 apple and six pear trees growing in almost four feet of soil, and a landscape of native and pollinator-friendly plants. The hope is to grow up to 40,000 pounds of produce each year, which will be served onsite by the Javits Center’s caterer, CULTIVATED.

You might’ve heard that the Javits Center had a garden on its roof before—it already hosted a 6.75-acre passive green roof, but the Brooklyn Grange has turned that into an active farm for “roof-to-table” meals for its visitors and staff. “We’re taking sustainability to the next level—literally,” said Alan Steel, the president and CEO of the New York Convention Center Operating Corporation. “We’re excited to work with Brooklyn Grange to create a unique roof-to-table experience for our guests in the new heart of New York City. This innovative farm will enable our staff to push the boundaries of sustainability and further explore how to improve the quality of life for our neighbors—those with wings and those without.” “It’s much more than just a farm—the green roof and 344,000-gallon underground rainwater cistern will prevent millions of gallons of stormwater from entering New York City’s sewer system each year, according to Javits Center officials. This rainwater will instead be used to irrigate crops and trees, which will limit the farm’s municipal water use by about 50%. With a deeper soil depth, the farm will also reduce surface and air temperatures above and below the roof, helping to combat the urban heat island effect in a rapidly warming city. It’ll also encourage biodiversity and habitat for native and migratory pollinators.

A valuable addition to the 5.6 acres of rooftop space already being farmed by Brooklyn Grange, the impact of The Farm at the Javits Center will be massive, challenging millions of visitors per year to think differently about food, farming, and even cities. ”It is widely recognized that the cities of today were not designed to adequately meet the challenges of tomorrow’s climate,” Gwen Schantz, the co-Founder and Chief Creative Officer of Brooklyn Grange, said. “We design all our green spaces to draw in and engage the community with positive conversations about sustainability, and we aim to inspire every visitor to The Farm at the Javits Center to think what cities of the future might look like.”

Starting next year, the Farm at Javits Center will host public programming and events, where you’ll be able to see the farm yourself. The center also has a 15,000 square-foot, glass-enclosed space that can host events with up to 1,500 individuals throughout the year, as well as a massive outdoor terrace, giving guests the chance to enjoy native wildflowers maintained by Brooklyn Grange’s landscape maintenance team—allowing the public to see it whenever they attend an event here.”

“While folks are checking in for an event at the Javits Center, upstairs, farmers are planting shallots. It’s a one-acre rooftop farm, part of the $1.5 billion expansion project at the convention center on the West Side of Manhattan. “There will be millions of people coming through this convention hall in the coming years, and we are excited that we can see this,” said Ben Flanner, co-founder and CEO of Brooklyn Grange, which is managing day-to-day operations at the farm with views of the Hudson River and Midtown Manhattan.

Brooklyn Grange also operates rooftop farms in Queens and Brooklyn, and is expecting to generate up to 40,000 pounds of produce each year on the Javits roof.  “Leafy greens, arugula, zucchini, cucumbers, baby carrots, and lots of herbs,” Flanner said of the expected produce. It will be passed along to the caterer for the Javits to cook as part of meals for guests at events.

A greenhouse has also been built on the roof. On the other side of the roof from the farm is an outdoor terrace, which features the only rooftop orchard in the country with 32 apple trees and six pear trees. All of this continues the sustainability program at Javits, which already includes a nearly seven-acre green roof.  “We’ve got the largest rooftop solar installation in Manhattan going in, tied to our micro grid, so that’s going to give us some clean energy,” said Jacqueline Tran, the energy and sustainability manager at Javits.

Tran says the building was constructed with bird-friendly glass similar to the older parts of the center to reduce incidences of birds colliding with the building by at least 90-95%.  Tran says the farm’s soil soaks up rainwater, keeping it out of the sewer system and helping cut down on sewage overflow into local waterways. Water will also be captured, treated and recycled for irrigation use. Tran says this is the next chapter as the Javits works to be a model for sustainability.  “Showing the state, the city and other convention centers around the country what this venue can do beyond just be a building,” said Tran.

The Javits Green Roof has 5 species of bats, and 5 beehives each with 10,000-60,000 bees. The staff harvests and bottles honey which is used by the Javits catering firm and sold. “We consult for real estate development, urban farmers, schools, and more. Brooklyn Grange offers a wide variety of sustainability consulting services to businesses, schools, non-profits and government agencies. As the world’s leading authority on soil rooftop farming, we can provide expertise, data, and general guidance to help you design, build and program an urban farm. In addition to our expertise in designing and installing green roofs, green walls, and organic urban farm systems, our team can provide business planning support, program design, and insight into integrated sustainable design for new construction and building retrofits.” Brooklyn Grange hosts many types of events including weddings, dinners, and fashion shows.

Share
Previous Season 2 of The Pyramid of Power Debuts Friday Night
Next Why Do So Many Still Buy Into The Narrative?