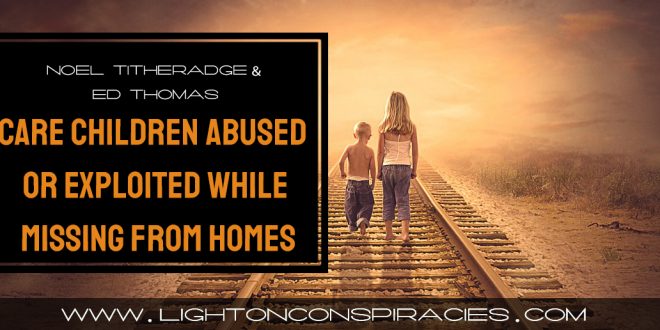 Care children sexually abused or exploited while missing from homes

More than 60 young people were sexually abused or exploited after going missing from unregulated homes, the BBC has learned.

Information requests also indicate that missing episodes have doubled in the past three years in England and Wales.

The charity Missing People said the government must “urgently” address the lack of quality placements.

The Department for Education said councils had a duty to make sure accommodation for these children was suitable.

Children over the age of 16, often in care or formerly so, are increasingly being placed in unregulated homes in England and Wales.

Known as semi-independent or supported accommodation, they offer support but not care to residents.

In September, BBC News reported that vulnerable teenagers in unregulated homes face ‘organised abuse’ while living in such accommodation.

Information requests sent to councils by BBC News indicate that the number of times children and young people have gone missing from unregulated semi-independent accommodation has doubled over a three-year period.

In the same period, councils found that 63 young people were sexually abused or exploited while missing from unregulated homes.

Around one in six missing episodes in 2019 featured children already recognised as being at risk from child sexual exploitation.

The BBC has also estimated that police forces spent at least £50m last year in looking for children in care who have gone missing from their accommodation.

Many boys face criminal rather than sexual exploitation.

One young man – Kieran, 17 – has been placed in unregulated homes since the age of 15.

Despite growing up in central London, he was placed nearly 200 miles away in Wrexham, north Wales.

“There was no family around me, I had no friends”, he says.

“Everyone was coming up to me because they knew I wasn’t from the area, asking ‘can you do this for me?'”

Within three months of being there his mother died. He says he began working for drug gangs.

On one occasion he was kidnapped from outside the home before being moved around the country to help run so-called ‘county lines’ drug dealing.

“All the money I was making was being used to get home to see my family”, he said.

He said his life was ‘terrible’ and he had tried to kill himself on two occasions.

“The care system, social services and government made me feel like I didn’t want to be around no more.

“I wanted to see my mum for the last time and get out of this world where no-one cares about me”, he said.

The government “urgently” needs to address the lack of safe and appropriate placements in areas where children need them, according to Josie Allan, from Missing People.

“Any child who goes missing is at risk of serious harm and this only increases if they are placed in situations where they go missing more often”, she said.

“We are seriously concerned about the number of children being placed a long way from home, in inappropriate or unsafe accommodation.”

Callum (not his real name) said the homes were often surrounded by drugs and violence.

“The whole road was a drug hotspot, surrounded by crackheads all day long. You want to come home to a safe place”, the 16-year-old said.

‘No-one would know anything’

He said life in a home led to him selling drugs for gangs.

“If I say no to these people they’re going to find (someone else) in a care home who’s going to do it – it’s not a problem for them.”

He believes semi-independent accommodation should be more closely scrutinised.

“They need to be watched more, they need to have inspectors and professional people going and regulating the thing.

“You could be running a full-on crack den operation in a care home and no-one would know anything.”

“Of course, the government needs to regulate semi-independent accommodation”, she said.

“This alone though is not sufficient. The government must recruit and retain more social workers, so that care leavers can benefit from enhanced support.”

The Department for Education in England declined to be interviewed but said councils had a legal duty to make sure accommodation for these children was suitable.

“It is unacceptable for any child to be placed in provision that does not meet their needs, for any period of time.

“Local authorities are held accountable for the care they provide to vulnerable children by Ofsted.”

Names have been changed to protect identities.

What are your experiences of unregulated homes or semi-independent accommodation? Email [email protected].

Please include a contact number if you are willing to speak to a BBC journalist. You can also contact us in the following ways:

Or use the form here