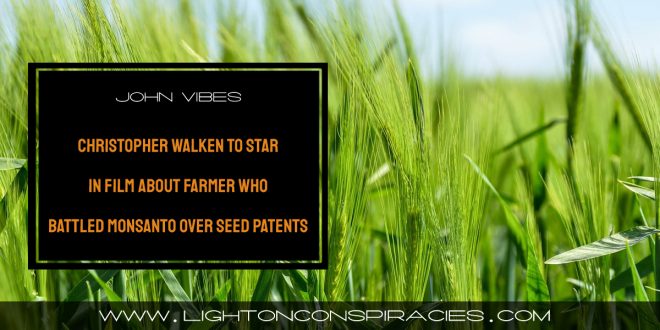 Hollywood favorite Christopher Walken will be starring in a new film called Percy which tells the true story of an independent canola farmer from Canada named Percy Schmeiser, who fought a lengthy legal battle against the bio-agriculture giant Monsanto.

In 1996, Canada became one of the first countries in the world to begin using genetically modified seeds commercially. A large portion of these seeds were Monsanto’s “Roundup Ready” seeds, which are genetically engineered to withstand the company’s herbicide, Roundup. As we now know, glyphosate, the primary ingredient in Roundup, causes cancer, but this would not be revealed until many years later, when other farmers took the company to court and won after getting cancer from glyphosate exposure.

Percy’s story, on the other hand, is about how these Roundup Ready seeds are patented by Monsanto, which has allowed them to take farmers to court for something as simple as saving seeds. Percy had been saving seeds for most of his career in farming, in fact, it is a common practice among farmers around the world.

However, Monsanto’s terms of service don’t allow farmers to replant seeds from previous years, they need to buy new batches each year from the company, or else they could end up facing lawsuits. Percy never bought any seeds from Monsanto, but he had a habit of collecting unused seeds from his farm for later use.

For some reason, a few of Monsanto’s Roundup Ready seeds ended up on his property, and he collected them without realizing the difference and ended up planting them the following year. Monsanto then sued Percy for patent infringement in 1998, after the company took samples from his fields and found that he was using Monsanto’s patented seeds.

Monsanto won the initial trial, but Percy appealed, and in each case, the judge ruled that Monsanto’s seeds needed to be treated as other patented products. When the case was finally taken to the Supreme Court, they also ruled in favor of Monsanto, upholding the dangerous precedent that Monsanto could sue farmers over use of patented seeds. However, the court also ruled that Percy didn’t have to pay them anything, because he technically never agreed to their Terms of Service since he was not actually a Monsanto customer and only obtained the seeds by mistake.

In 2010 Percy told Democracy Now! that Monsanto attempted to ruin his life for fighting the case.

“They tried to seize all our farmland, our farm equipment, so they could stop us, because we were using mortgages on our farmland to pay for our legal bills,” he said.

In a statement announcing the trailer for the film, Mongrel Media, said that this film is intended to raise awareness about GMO seed patents and their impact on the farming industry.

“Ultimately, through his David and Goliath battle, Percy helped stall the spread of GMOs, and the takeover of our food system by greed-driven corporate interests,” the statement read.

As Truth Theory reported last year, Monsanto targeted authors and journalists who reportedly negatively on its products and waged a propaganda war against them, which included spamming book pages and articles with negative reviews, and otherwise working to discredit critics.