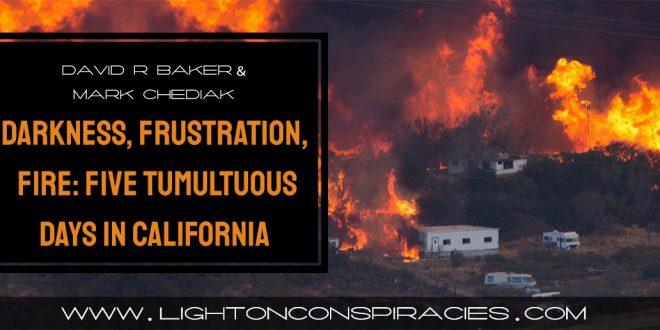 (Bloomberg) — Californians have always lived in the shadow of calamity — from earthquakes, mudslides, flooding, fires and droughts.

But the move this week from the state’s largest power company represented a new type of burden: a widespread, intentional hardship designed to prevent something much worse.

Facing a powerful windstorm, PG&E Corp. cut off power to wide swaths of California rather than risk its lines sparking a deadly wildfire like the ones that ravaged the state over the past two years and sent the company into bankruptcy. The outage hit 34 of the state’s 58 counties — including the heavily populated San Francisco Bay area — and led to backlash, frustration and confusion.

PG&E issues its first news release warning of a “fire weather watch” that may lead to power shutdowns in 29 counties, without saying how many customers may be affected. Until this time, the utility has largely deployed shutoffs in slices of the Napa Valley and along the foothills of the Sierra Nevada mountains, where it had just cut electricity over the weekend to about 10,000 customers due to windy conditions.

The size and scope of PG&E’s plans start to come into focus. The company says it may need to turn off the lights to more than 600,000 homes and businesses starting early Wednesday. The announcement includes dozens of cities in the San Francisco Bay area, such as Oakland, San Jose and Berkeley.

“This is shaping up to be one of the most severe dry wind events we’ve seen in our territory in recent years,” Michael Lewis, senior vice president of electric operations, says in a statement.

As the news of potential outages spreads, Californians mobilize for what could be the largest planned blackout of its kind in history. State and local authorities ready their emergency operations centers. Residents rush out to snap up generators, flashlights, batteries, ice and bottled water, leaving hardware and grocery store shelves empty. Stanford professor Michael Wara calculates that a two-day outage could have an economic impact of about $2.6 billion.

PG&E confirms that it will shut off power for almost 800,000 customers in stages, starting just after midnight. Four new counties are added to its list, bringing the total to 34. It tells customers to prepare for an “extended outage.”

The utility’s website is flooded with traffic and crashes, leaving residents frustrated and confused. Customers report having trouble reaching the utility’s call center.

“No one is happy about it, no one is satisfied, but no one should be surprised, because we have been anticipating this moment for a year,” Newsom says at a bill-signing event in Oakland. The blackout “shows that PG&E finally woke up to their responsibility to keep people safe,” he says.

State Senator Jerry Hill, a frequent PG&E critic, says the company went too far. “They need to spend the billions they’ve already received to harden the system,” he says at the event. “I think they’re in crisis and will do anything to prevent another wildfire.”

At the utility’s first press conference since the shutoff warning, PG&E representatives apologize for the problems with the company’s website and say they are working to address the issue. The company also says it is rushing to get generators to the California Department of Transportation so it can keep open a critical freeway tunnel that connects parts of the East Bay.

The first phase of the shutoff starts, affecting about 500,000 customers in more than 20 counties.

More than a million Californians wake up without power, including many in wine country. The website with outage information remains down. PG&E says the shutoffs will spread by noon to cities surrounding San Francisco, then later delays the second phase after wind patterns change.

Stores are shut in the counties hit by early outages. Safeway supermarkets bring in back-up generators and refrigerated trailers upon availability.

At Sonoma County’s Russian River Brewing Company — famed for its Pliny the Younger cult beer — a 2-megawatt generator keeps the business running. The generator is too big, burning $8,000 to $10,000 of diesel per day. But nearby wineries had already snapped up all the smaller ones, says Russian River co-owner Natalie Cilurzo.

In many areas without power, wind speeds have yet to pick up, leading to criticism the outage was unnecessary.

Napa Democrat Bill Dodd expresses a similar concern, saying “many of my constituents are disturbed that the power was shut down before the winds started to pick up.”

In the midst of the power tumult, PG&E is dealt a blow in its bankruptcy case. The judge overseeing the process issues a ruling that strips PG&E of its exclusive control over its reorganization, allowing bondholders and wildfire victims to offer a competing plan that all but wipes out current shareholders.

The blackout spreads to more densely populated parts of the Bay Area, including Oakland. With WiFi down, people flood LTE networks on their cell phones, crippling the systems and virtually killing access to cellular data for all within shutoff zones.

Just hours after PG&E shuts off power to Moraga, an affluent rural town about 20 miles east of San Francisco, residents awake to police warning them to seek shelter at a local church. Despite the dead electrical lines, a wildfire has broken out.

Roughly 140 homes are evacuated, and inoperable traffic lights create delays of an hour or more as cars clog the single-lane road leading out of town. The fire eventually is contained with no damage to houses.

PG&E says it has restored power to 126,000 customers, easing fears that the blackout could drag on for days.

As Wall Street trading opens, PG&E shares plunge more than 30% on concern that the bankruptcy judge’s ruling could lead to a total wipeout for shareholders. Analysts warn the stock could fall to zero.

Meanwhile, Bay Area residents awaken to darkness and adjust to disrupted routines. In Oakland, a doughnut shop serves doughnuts but no coffee. Credit card machines are down, so patrons pay with cash only.

At a clearly powerless sushi restaurant, a man begins unloading a box of fresh tuna to deliver. “They ordered it,” he shrugs.

The normally bustling University of California, Berkeley, is nearly devoid of students, with classes canceled due to the blackout. Just north of campus, a strip of shops and restaurants still has power, but closes anyway.

“There is no business,” says Ray Woo, owner of the TC Garden restaurant next to the university. “Nobody is coming. There aren’t any students.”

A small wildfire is spotted beneath a PG&E transmission line on a steep ridge just south of San Francisco. It is quickly contained, and firefighters don’t announce a cause.

Newsom blasts PG&E’s handling of the shutoff. He blames the outage on the utility’s “greed and mismanagement” and calls for a “major reorganization” of the company. But while the governor says future planned blackouts must be more surgical, he defends the practice itself, saying it could have saved lives during last year’s deadly Camp Fire if PG&E had chosen to do it then.

In his first public statements since the outage began, PG&E Chief Executive Officer Bill Johnson apologizes for the way the company handled its communication of the shutoffs.

“This isn’t how we want to serve you,” he says. “We are in the business of providing power. Not taking it away.”

Johnson says the company made a determination that the blackouts were necessary for safety reasons, to ensure “zero risk” of sparks.

A brush fire pops up on the northern edge of Los Angeles, and fanned by strong winds, starts marching westward. The Saddleridge fire soon closes a portion of the Interstate 5 freeway into the city and nears the Aliso Canyon natural gas storage facility, site in 2015 of the largest gas leak in U.S. history.

Lights are starting to come back on in the Bay Area. Around 11 p.m., PG&E says it has restored power to more than half of the 738,000 customers who lost it, including all in the northernmost counties the company serves.

The Saddleridge swells to 7,542 acres, forcing the evacuation of 23,000 homes. At least 25 structures have burned, and one civilian suffered a heart attack, dying at the hospital. Fire officials say they’re investigating reports of sparks flying from a transformer at the start of the blaze.

PG&E says only 84,000 customers remain without power. It aims to have service restored to almost all homes and businesses by early Saturday.

The outages may not have been in vain: The utility said it found 30 instances where tree branches had fallen on its power lines or knocked them down.

“There’s some vindication — that’s not the right word — the fact that there were 30 plus things that could’ve caused a fire and didn’t,” made the blackout worth it, Johnson says.

About 735,000 customers in California had power restored within 48 hours after getting the all clear earlier in the week, Sumeet Singh, vice president of the community wildfire safety program at the utility, said in a press conference on its social media platforms. About 2,500 are still without power in the state, he added.

The utility also said it found 50 cases of damage or hazard, up from 30 the day before.

To contact the editors responsible for this story: Lynn Doan at [email protected], Kara Wetzel

Share
Previous School to Prison Pipeline Exposed as 30,000 Kids Under Age 10 Arrested Since 2013
Next The basics of a staged bioterror attack