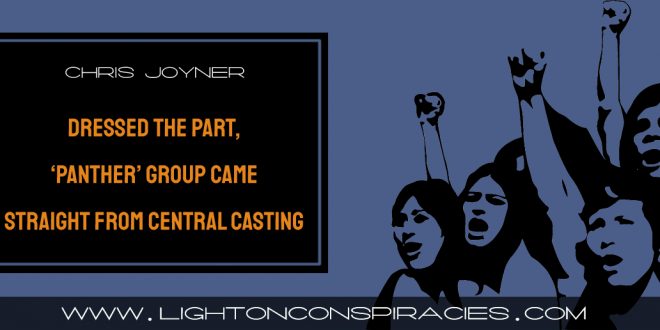 By Chris Joyner, The Atlanta Journal-Constitution

They said they were Black Panthers, and they looked the part with all-black attire and black berets adorned with a cat-head patch. Their leader was a tall, thin black woman armed with an assault rifle and a determined look. Photos of the group popped up in local news outlets, including The Atlanta Journal-Constitution, but also in the British tabloid press.

“Armed female Black Panther leads her comrades including a white recruit on a march through Georgia,” The Daily Mail wrote in an online story about the June 3 demonstration Decatur. The story featured several dramatic photos and embedded Instagram posts.

It is easy to see why the group attracted attention. In a moment of fury over police shootings of black people, the group was perfectly cast. Maybe too perfect.

Within a few days, an activist on Twitter sussed out that the group was comprised of models and actors from Atlanta’s film and entertainment industries. A Twitter user who goes by Wolf The Red identified them from their Instagram accounts where he found the group modeling haute couture or publicizing their film credits, but “zero prior demonstrations. No posts with guns. No calls to action.”

A group of Atlanta-area models and actors dressed as Black Panthers pose for a photo on the Decatur Square after a march and rally Wednesday afternoon, June 3, 2020. Members of the group say their intent was genuine, even if the outfits weren’t. BEN GRAY FOR THE AJC
Photo: The Atlanta Journal-Constitution

The AJC reached out to members of the group, including Whitney Oni, the striking woman who drew so much attention. Oni, an Atlanta-based graphic designer and model, said the recent protests were not her first time taking to the streets.

“I started back with the Trayvon Martin case,” she said, referring to the 2012 shooting death of the Florida teenager by a neighborhood watch coordinator in a gated community.

After the death of George Floyd at the hands of Minneapolis police officers last month, Oni said she believed it was “important to use my voice.”

And to dress the part.

“The outfits? We just pulled inspiration from (the Black Panthers),” she said. “It was mostly black and leather — pleather. Some of us are vegans, vegetarians.”

A group of Atlanta-area models and actors dressed as Black Panthers took an active role in the protest on the Decatur Square Wednesday afternoon, June 3, 2020. Members of the group say their intent was genuine, even if the outfits weren’t. JENNI GIRTMAN FOR THE AJC
Photo: The Atlanta Journal-Constitution

And they were close. The patch, for instance, was a Black Panther patch — just not those Black Panthers. It was the service patch for the 66th Infantry, a U.S. Army Division during World War II.

Spiike G., who works in the Atlanta movie industry but who declined to give his real name, said he picked the patches up in an army surplus store.

“I didn’t want to buy the original Black Panther Party logo,” he said. “I love what they stood for, but I didn’t want to offend them until we got the blessing from them.”

Spiike said he got the idea to dress as Black Panthers because he wanted to be a “symbol of hope” in the sea of protesters.

“It wasn’t doing it for fun or anything like that,” he said. “What we wanted was the actual blessing from the original Black Panther Party to use their name.”

Spiike said his late father, whose name he declined to give, was a Black Panther, but he only found out after he died.

Both Spiike and Oni claim the guns were real. Spiike said his was a Springfield Saint AR15; Oni carried a Smith & Wesson 22LR assault rifle.

“I’m trying to show a certain amount of force, but something that was appropriate for a protest,” she said.

Spiike is the creator of an online independent television series called “Justice,” where a black vigilante hero tracks down bad cops and gets retribution for their racist violence. A lot of the gear worn by the helmeted hero looks very much like that worn by his group in protests.

Regardless of its origins, Oni claimed the group — which she called “the Black Revolutionaries” — is real.

Decaturish.com reported on the group’s appearance at a June 3 demonstration on the Decatur square where they were initially identified as the “New Black Panther Party. That was later corrected to “Black Panthers Revolutionaries Atlanta Chapter.”

“We did introduce ourselves as the newest Black Panther party,” Oni explained.

Whatever their name, the description didn’t sit well with Hashim Nzinga, the leader of the New Black Panther Party, who suggested on his Facebook page that the group could be an FBI front organization.

An unidentified member of a group of young creatives posing as Black Panthers takes a knee in silence for eight minutes and 46 seconds in Decatur Square on Wednesday, June 3, 2020, in Decatur, Georgia. One of the group’s leaders said he chose the outfit to inspire protesters.

CHRISTINA MATACOTTA FOR THE AJC

The Atlanta-based New Black Panthers is a militant organization identified by the Southern Poverty Law Center as a hate group for its violent and antisemitic rhetoric.

Joanna Mendelson, associate director for the Anti-Defamation League’s Center on Extremism, said the fact that a group of models and actors chose to dress as Black Panthers for a protest already is feeding conspiracy theories popular on the extreme right. White supremacists online trade such stories as “proof” that the protests around the nation are seeded with “crisis actors” paid to foment unrest, she said.

“Extremists will glom onto such events and use it to feed that narrative,” she said. “It’s adding to the chaos of the moment.”

Already, photos of the group have shown up on the messaging platform Telegram on a white supremacist channel with more than 12,000 subscribers.

“The BLM (more likely some white leftist handlers) are using actors to pose as Black Panthers to help market the trend of arming one ethnogroup in a polarized multiracial society,” the user wrote.

Spiike said his group’s only goal was to inspire.

“I’m out here just protecting my people and walking the street with my firearms,” he said.