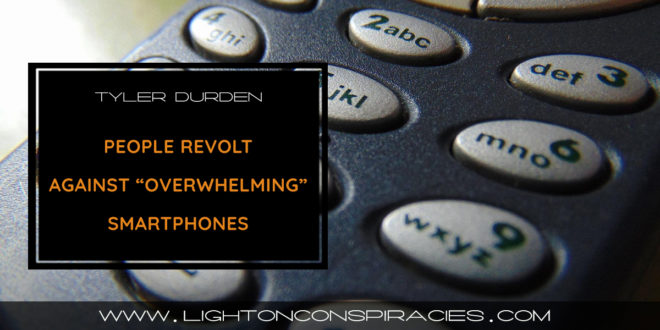 Dumbphone Sales Are Soaring As People Revolt Against “Overwhelming” Smartphones In a time when various “developed world” intelligence agencies are filling up petabytes of hard disk space with domestic phone recordings and tracking their own citizens who – in the pursuit of a “liberal” agenda – have been escalated to a greater terrorist threat than actual foreign terrorists, some people have had enough and are throwing their smartphones into the trash and replacing them with “dumbphones” instead.

One among them is seventeen-year-old Robin West who, according to the BBC, is an anomaly among her peers: “she doesn’t have a smartphone.” Instead of scrolling through apps like TikTok and Instagram all day, she uses a so-called “dumbphone.”

Those readers who had a cell phone in the late 1990s are all too familiar with these; for everyone else these are basic handsets, or feature phones, with very limited functionality compared to say an iPhone. For the most part, you can typically only make and receive calls and SMS text messages. And, if you are lucky, listen to radio and take very basic photos, but definitely not connect to the internet or apps.

Robin’s decision to ditch her former smartphone two years ago was a spur of the moment thing. While looking for a replacement handset in a second-hand shop she was lured by the low price of a “brick phone.” Her current handset, from French firm MobiWire, cost her just £8. And because it has no smartphone functionality she doesn’t have an expensive monthly data bill to worry about.

“I didn’t notice until I bought a brick phone how much a smartphone was taking over my life,” she says. “I had a lot of social media apps on it, and I didn’t get as much work done as I was always on my phone.”

The Londoner adds that she doesn’t think she’ll ever buy another smartphone. “I’m happy with my brick – I don’t think it limits me. I’m definitely more proactive.”

According to BBC, dumbphones are enjoying a revival. Google searches for them jumped by 89% between 2018 and 2021, according to a report by software firm SEMrush. And while sales figures are hard to come by, one report said that global purchases of dumbphones were due to hit one billion units last year, up from 400 million in 2019. This compares to worldwide sales of 1.4 billion smart phones last year, following a 12.5% decline in 2020.

Meanwhile, a 2021 study by accountancy group Deloitte said that one in 10 mobile phone users in the UK had a dumbphone.

“It appears fashion, nostalgia, and them appearing in TikTok videos, have a part to play in the dumbphone revival,” says Ernest Doku, mobiles expert at price comparison site Uswitch.com. “Many of us had a dumbphone as our first mobile phone, so it’s natural that we feel a sense of nostalgia towards these classic handsets.”

Doku says it was the 2017 relaunch of Nokia’s 3310 handset – first released in 2000, and one of the biggest-selling mobiles of all time – that really sparked the revival. “Nokia pushed the 3310 as an affordable alternative in a world full of high-spec mobiles.” He adds that while it’s true that dumbphones can’t compete with the latest premium Apple and Samsung models when it comes to performance or functionality, “they can outshine them in equally important areas such as battery life and durability.”

Five years ago, Przemek Olejniczak, a psychologist, swapped his smartphone for a Nokia 3310, initially because of the longer-lasting battery. However, he soon realised that there were other benefits.

“Before I would always be stuck to the phone, checking anything and everything, browsing Facebook or the news, or other facts I didn’t need to know,” he says.

“Now I have more time for my family and me. A huge benefit is that I’m not addicted to liking, sharing, commenting, or describing my life to other people. Now I have more privacy.”

However, Olejniczak, who lives in the Polish city of Lodz, admits that initially the switch was challenging. “Before I’d be checking everything, such as buses and restaurants, on my smartphone [when travelling]. Now that is impossible, so I have learned to do all those things beforehand at home. I got used to it.”

One maker of dumbphones is New York company Light Phone. Slightly more clever that the norm for such products, its handsets do allow users to listen to music and podcasts, and link by Bluetooth to headphones. Yet the firm pledges that its phones “will never have social media, clickbait news, email, an internet browser, or any other anxiety-inducing infinite feed”.

The company says it recorded its strongest year for financial performance in 2021, with sales up 150% compared with 2020. This is despite its handsets being expensive for dumbphones – prices start at $99 (£75).

Light Phone co-founder, Kaiwei Tang, says the device was initially created to use as a secondary phone for people wanting to take a break from their smartphone for a weekend for example, but now half the firm’s customers use it as their primary device.

“If aliens came to earth they’d think that mobile phones are the superior species controlling human beings,” he says. “And it’s not going to stop, it’s only going to get worse. Consumers are realising that something is wrong, and we want to offer an alternative.”

Tang adds that, surprisingly, the firm’s main customers are aged between 25 and 35. He says he was expecting buyers to be much older. Tech expert, Prof Sandra Wachter, a senior research fellow in artificial intelligence at Oxford University, says it is understandable that some of us are looking for simpler mobile phones.

“One can reasonably say that nowadays a smart phone’s ability to connect calls and send short messages is almost a side feature,” she explains. “Your smart phone is your entertainment centre, your news generator, your navigation system, your diary, your dictionary, and your wallet.”

She adds that smartphones always “want to grab your attention” with notifications, updates, and breaking news constantly disrupting your day. “This can keep you on edge, might even be agitating. It can be overwhelming.”

“It makes sense that some of us are now looking for simpler technologies and think that dumbphones might offer a return to simpler times. It might leave more time to fully concentrate on a single task and engage with it more purposefully. It might even calm people down. Studies have shown that too much choice can create unhappiness and agitation.”

Yet back in London, Robin West says that many people are bewildered by her choice of mobile. “Everyone thinks it’s just a temporary thing. They’re like: ‘So when are you getting a smartphone? Are you getting one this week?’.”