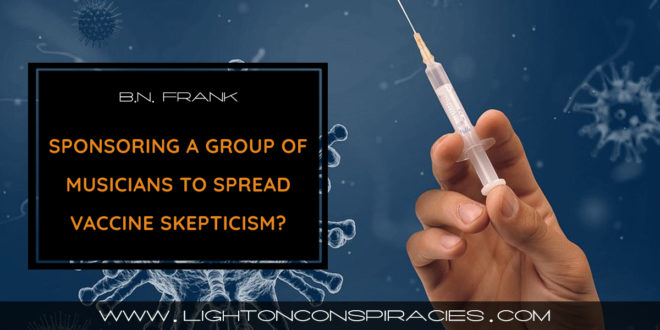 Vaccine side effects, injuries, deaths have been reported for decades (see 1, 2, 3).  They continue to be reported about the COVID jabs as well, including by music legend Eric Clapton who has been very vocal about his traumatic experience.  A few months ago, Clapton also announced that he refused to perform at venues that require proof of COVID vaccination.  Now he’s reportedly funding musicians to get the word out about vaccine risks, which Rolling Stone magazine interprets as not only “spouting vaccine nonsense — he’s bankrolling it.”

Rolling Stone Wonders If Clapton’s Legacy Is in Jeopardy

Rock legend once again courting controversy, this time over vaccines

(Newser) – Eric Clapton has been a fixture in rock for decades and thus a regular presence in Rolling Stone. He’s been on the cover eight times since 1968 and has ranked second in the magazine’s list of best guitarists, writes David Browne in a new story about Clapton for, yes, Rolling Stone. But it’s a safe bet the 76-year-old won’t like the piece by Browne, who suggests Clapton is jeopardizing his legacy with his vocal opposition to COVID vaccines. Clapton himself is vaccinated, but he says the side effects have made it difficult to play the guitar. However, the musician isn’t just speaking out about his own case but using his celebrity to push the anti-vaxxer cause, writes Browne (who writes from a decidedly pro-vaccine viewpoint). For example, Clapton has donated a van and money to a group of UK musicians who play shows spreading the anti-vaccine message.

In assessing this controversy—including Clapton’s decision not to play venues that enforce COVID protocols—Browne digs deeper into Clapton’s history of courting trouble. In particular, this involves the “jarringly racist” statements he made publicly early in his career. The most infamous example is a 1976 show in Birmingham in which an apparently drunk Clapton spouted extreme anti-immigration views from the stage, complete with ethnic slurs. “How do we reconcile some of his views with his music?” writes Browne. “Is it still possible to enjoy his lasting achievements—the desperate passion of Layla and Other Assorted Love Songs, the relaxed grooves of 461 Ocean Boulevard, the dramatic makeover of Robert Johnson’s ‘Crossroads’ with Cream—without thinking twice?” (Read the full story, in which some other musicians aren’t so sure.)

Share
Previous The Pyramid of Power: Chapter 7 – Big Pharma and the Medical Cartel
Next Ole’s Newsletter 2021 11