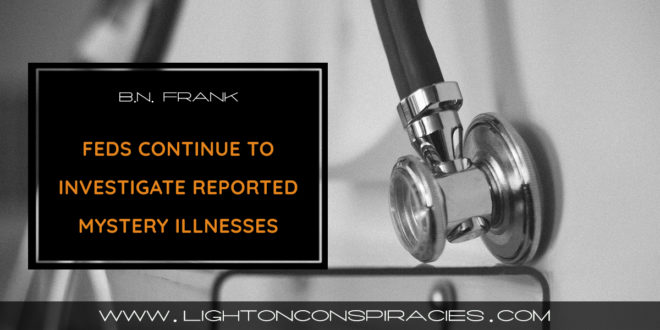 Medical experts have acknowledged that American Embassy workers and their family members were likely injured by exposure to microwave energy (see 1, 2, 3).

Last month, U.S. federal agencies reported that they are investigating similar experiences suffered by non-embassy workers.  An update on their progress was reported yesterday by Newser:

(Newser) – In 2019, a White House official walking her dog in Arlington, Va., suddenly experienced ringing in her ears, felt her face start to tingle, and came down with a headache. In early November 2020, a National Security Council official fell ill after walking near the Ellipse, on the White House’s south side, suffering from sleeplessness and headaches for about a week. Now, sources tell CNN of a third such incident in the DC area of so-called Havana syndrome, continuing to baffle investigators trying to track down the source of these odd incidents. In the previously unreported case, which sources say took place a few weeks after the presidential election in November, another NSC official was sickened near an entrance to the grounds of the White House. In that incident, the official required immediate medical treatment for more severe symptoms.

The New York Times reported last week there’ve been more than 130 similar cases worldwide over the past five years among US diplomats, soldiers, spies, and other personnel—more than double the number of cases previously reported, and in more nations than Cuba and China, where cases initially seemed to be concentrated. The investigation into what’s causing these mystery illnesses has been a frustrating one, as symptoms and their severity vary, and diagnoses have been tough to make. In December, the National Academies of Science, Engineering, and Medicine issued a report noting the most likely cause was “directed, pulsed radiofrequency energy,” aka targeted microwave radiation, per the Times. But officials note that’s not definitive, and in a recent Foreign Policy piece, Cheryl Rofer goes so far as to say that theory is “scientifically implausible,” with no evidence to back up the existence of a microwave weapon that would prove “wildly impractical” to implement. (Read more Havana syndrome stories.)

Of course, microwave weapons aren’t the only things that emit microwave radiation that could cause “Havana Syndrome” or symptoms and illnesses like it.  Common wireless devices and infrastructure also emit high levels of biologically harmful microwave radiation.  They include cell towers, utility “Smart” Meters, Wi-Fi “hotspots”, and more.  Just saying…