Interview 1482 – The China Deception on This Week in Money

The mainstream are framing the rise of China as a competitor to the US in the same terms as they did the Cold War with the Soviet Union. And, just as the Cold War was a charade facilitated by lend lease and technology transfers, so, too, is the New Cold War facilitated by technology transfers to China that are framed as “IP theft.” James Corbett joins Jim Goddard on This Week in Money to set the record straight on how the Clash of Civilizations 2.0 is being used to justify domestic clampdowns, social credit surveillance, and military build up.

China and the New World Order

Hong Kong: Chaos Before the Order

Michael Pillsbury admits US behind Hong Kong protests on Fox

China Still Fudging Gold Numbers (And Everything Else) 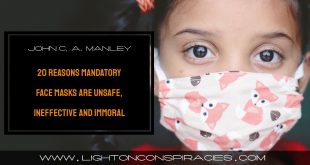