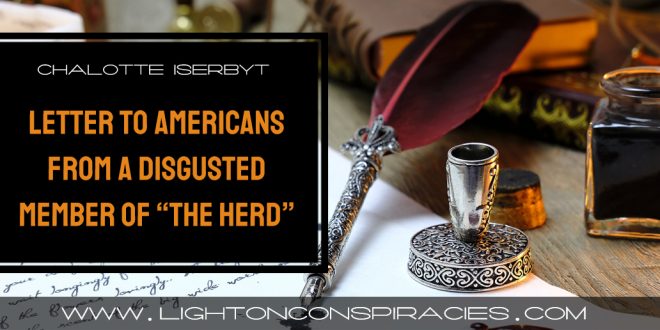 Letter to Americans From a Disgusted Member of “The Herd”

I would probably be close to dead today had Steve Schran, retired public school music teacher and good friend and ally in opposition to Bill 798 (referred from now on in this article as “The Herd Bill”) driven me back and forth to the so-called public hearing on the “Herd Bill” which requires the sticking of needles in our children’s butts, without informed parental consent.

“We the People” were denied our Constitutional right to testify at the beginning of the March 13, 2019 hearing, BEFORE our dumbed down elitist (and other adjectives that end with “ist”) elected officials who drafted and/or supported the Herd Bill. Their testimony took up most of the daylight hours of this so-called farce of a “public” hearing.

Tell me why anyone with their head screwed on would take a day off, dragging their children with them, to testify about a bill about which they knew everything, if they had known they would have their testimony delayed until the end of the day or to the end of the hearing which terminated at 2 a.m. the next day? Did We the People (who undoubtedly had read The Herd Bill and probably knew more about its serious negative privacy and “body invading” unconstitutional ramifications than our elected officials) travel many miles to be relegated to speaking during the last hours of the hearing?

Why were We The People made to suffer through our elected officials regurgitation of what we understand better than they, unless our elected officials hold an “ism” philosophy? We citizens, who believe the United States is a Constitutional Republic, not an “ism” form of government, ended up unable to deliver our testimony unless we were willing to stay in the “herding overflow chambers” endless hours. How many of us, especially ones accompanied by young children, left before being able to testify? The hearing terminated at 2 a.m. the next day!

Why were our elected officials allowed to speak for first few hours (dominate the dialogue)?

We the People of Maine should call for a March on Augusta. Take on the mantle of Patrick Henry who said “Give me Liberty or Give Me Death”. (Patrick Henry was one of the Founding Fathers of the United States and the first governor of Virginia. He was a gifted orator and major figure in the American Revolution. His rousing speeches – which included a 1775 speech to the Virginia legislature in which he famously declared, “Give me liberty, or give me death!

Testimony by Charlotte Iserbyt in Opposition to Bill 798
March 13, 2019

My name is Charlotte Thomson Iserbyt. I am a resident of Dresden, Maine. My education credentials span many years: commencing in 1976 as an elected school board member in Camden, Maine; co-founding with the late Bettina Dobbs, RN, and public school teacher, of GEM (Guardians of Education in Maine) 1978-2000. Bettina was a nationally known/credentialed spokesperson in opposition to mandatory vaccination. I have been a speaker on so-called “education” nationwide and internationally, since 1976, and am the author of the “deliberate dumbing down of america — A Chronological Paper Trail”, 1999 which is a free download from this website.

That we should be discussing amending legislation that should never have existed in the first place, a mandate of the government to require our children to have needles stuck in them, for no matter what dubious purpose, is shocking. The great late Russian writer/dissident, Alexander Solzhenitsyn, who spent many years in Soviet concentration camps, warned us:

“Coexistence on this tightly knit earth should be viewed as an existence not only without wars… but also without [the government] telling us how to live, what to say, what to think,what to know, and what not to know.” (Speech given 9/11/73)

Are our schools and communities being turned into prison camps where police (Community Oriented Policing System: C.O.P.S) roam the streets and schools, and parents and plain citizens God-given, Constitutionally-guaranteed rights, are subsidiary to the rights of the federal and state governments?

We should not even be here today. The original law should never have been passed. If you approve Bill 798, have you a backup plan to protect parents who resist this mandate? What should parents do when the school nurse comes to their door, backed up by local or Maine State Police, to stick the needle in your child? Does this sound too far fetched in light of fact this very Maine Legislature confirmed on February 5, 2019 (ignoring an overwhelming majority of Maine citizens’ anti-Sauschuck testimony) the appointment of former Portland Police Chief Michael Sauschuck as Commissioner of Public Safety and Criminal Justice for the State of Maine. Please read this writer’s Testimony in Opposition to the Sauschuck Appointment; testimony 100% documented by official Cumberland County District Attorney discovery materials.

Chief Sauschuck oversaw two murder attempts of my son, a Gulf War I combat veteran and taxpaying resident in the City of Portland, Maine.

As former Governor James B. Longley was fond of saying: “THINK ABOUT IT!”

I say “DO SOMETHING ABOUT IT: RESTORE THE PROTECTIONS OF THE MAINE AND U.S. CONSTITUTIONS!

I bring my shocking testimony in opposition to confirmation of Police Chief Sauschuck to be Commissioner of Public Safety and Criminal Justice to your attention very simply to highlight the fact that the arm of Maine Government which will be enforcing these drastic “ism” immunization mandates is run by former Portland Police Chief Sauschuck, now in charge of you and your family’s “safety”.

Please, prior to voting on Bill 798, read following excerpts from testimony submitted by Jane M. Orient, M.D. Executive Director, the Association of American Physicians and Surgeons related to vaccinations.

The Association of American Physicians and Surgeons (AAPS), founded in 1943 to protect the sanctity of the patient-physician relationship, is dedicated to the Oath of Hippocrates and represents physicians in all specialties nationwide.

“The Association of American Physicians and Surgeons (AAPS) recognizes that vaccines, in the past, have prevented many serious illnesses. But it is simply a fact that every insurance policy has a premium. Every medical intervention carries both risks and potential benefits. The risk: benefit calculation is different for each individual patient, and can only be made by the patient (or the patient’s guardian) in consultation with the attending physician.

It is the right of every patient to refuse a medical intervention, even if recommended by the attending physician, and it is the duty of the physician to advise according to his or her own best judgment. Informed consent is a prerequisite for ethical medical treatment (or for research), as is internationally recognized in the Nuremberg Code.

In many venues, these principles are being violated, particularly for children and infants. “Recommendations” by the Advisory Committee on Immunization Practices are often transformed into mandates by state health departments, with or without the specific agreement by the legislature, and in turn, by school districts that require this medical treatment as a condition of attendance. If children do not receive all the mandated vaccines, because of their beliefs or individual medical circumstances, they may be deprived of their liberty to associate with others or of their supposed “right” to a public education. Parents may give “consent” to the vaccine under duress, such as the threat of having their children taken from them…

AAPS has called for an immediate moratorium on mandatory hepatitis B vaccines for schoolchildren. While Health and Human Services recently announced it would no longer recommend the vaccine for newborns, we are asking Secretary Shalala to further ask state health departments to place an immediate moratorium on all mandatory vaccines, particularly hepatitis B, pending further research about their effectiveness and dangerous adverse effects.”

Share
Previous Here Comes The Armed Police State; Like We Didn’t See that One Coming
Next Global Awakening, You are the Change, Overcoming Fear