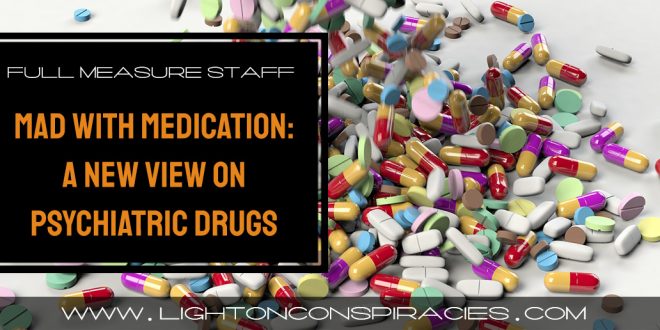 Mad with Medication: A new view on Psychiatric drugs

Antidepressants and other drugs for psychiatric conditions are credited with improving and saving countless lives. But what if that’s not the whole story? Today, we get another view from psychiatrist Dr. Peter Breggin, author of “Medication Madness” and director of the International Center for patient-oriented psychiatry. He says his profession has gone mad with medication.

Sharyl: Some people call you the “Conscience of Psychiatry.”

Sharyl: Why do you think that is?

Breggin: I got that name in the early seventies when psychiatric brain surgery was coming back. It’s called lobotomy. And actually it’s mutilation of the highest centers of the brain —one of my professions’ real atrocities. And when I heard it was coming back, I said, not this time. Finally one psychiatrist is going to say no. I had no idea what I was getting into. And I conducted a four or five-year campaign and stopped most of the lobotomy projects in the western world including at Harvard and including some that were funded by the federal government, by law enforcement and including some on little black children in Mississippi.

Sharyl: What do you think people don’t know about the practice of psychiatry that they ought to know?

Sharyl: I read that in 50 years of practice. You’ve never placed a patient on drugs.

Sharyl: What did the PROZAC experience teach us — and what was your role in that?

Breggin: Well, I was appointed by a federal court to be the expert for all the combined suits against Eli Lilly concerning Prozac, so I was the first person to go inside the corporation and look at all their records. PROZAC was essentially approved in combination with addictive sedatives. It was also obvious early on that the drug had amphetamine affects. The chief investigators said and wrote, ‘this drug has amphetamine like effects. We need to put this into the label. It can make depression worse, can make people agitated, make them angry, might increase the suicide rate’ but the FDA wouldn’t allow into the label what it’s chief investigator into adverse effects was telling them. So from the beginning, it was all a house of cards. And as for it’s being useful, I looked it over, carefully analyzed the statistics and said the drug actually doesn’t work. It’s about as good as placebo. Now Placebo will help anywhere between 40 and 80 percent of people, so it’s a huge effect and that especially with depression, because depression is not about a biochemical imbalance. It’s about hopelessness. Depression is part of the human experience.

But if you’re a dower doctor with a notepad or behind a computer and the big row of credentials to show how high and mighty you are wearing a jacket and tie, which I don’t do, and you are automatically feeling inferior to the guy. And then he tells you, you have a biochemical imbalance. What is more hopeless? What is more hopeless? So it increases the depression and you ended up obediently taking the drugs and then you get worse.

Sharyl: Is it hard to be sort of an outsider within your profession? You’re criticizing your colleagues, people that you see and work with and know about you. How is that?

Breggin: Well, imagine the worst movie you’ve seen about whistleblowers and all of that has happened to me. I don’t think I want to talk about it on the air rather than say you imagine it, it’s happened. The biggest mistake they made though was they went after my medical license for remarks I made on Oprah Winfrey

Breggin: and Oprah loved me and I loved Oprah, and Oprah backed me. And we ended up winning this license attack and I got so much publicity from it that I got my first best-selling book out of it.

Sharyl: What is the most promising medical treatment you see today for people with mental disorders or mental illness?

Breggin: There is no promising medical treatment and probably there never can be a promising medical treatment because to take a subject that has to do with freewill, love, the principles we live by, the experiences we’ve gone through and to say ‘it’s medical’ and to do something to the brain that’s counterproductive, which we encouraged people to do, is to believe they have all the brain they need. In fact, if they just stopped drinking so much or if they just stopped the drugs carefully— you gotta stop carefully with good supervision— if you do that, your brain’s going to come alive and you’ll be able to deal with your issues.

The FDA has a different view than Dr. Breggin. It says all approved drugs are safe and effective.

Share
Previous The Rise and Reversal of Anxiety and Depression
Next S&P Bearish on 5G, Tesla’s Coil and the T-Mobile Merger