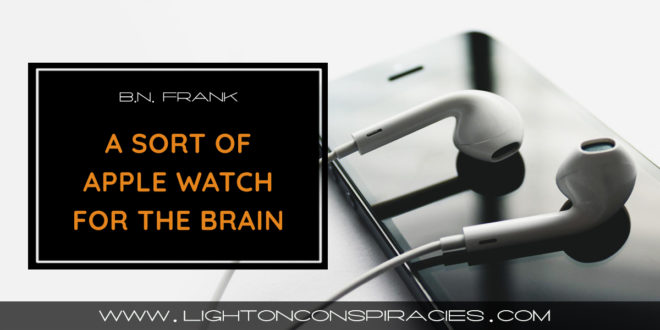 New Custom-Fit Earbuds – “a sort of Apple Watch for the brain” – Designed to Collect Neural Data; 30,000+ Made So Far Wireless devices and wearables – including ones specifically designed for medical purposes – often expose wearers to high levels of biologically harmful electromagnetic radiation.  Nevertheless they are still very popular, otherwise they wouldn’t continue to be designed and promoted for health monitoring as well as recreational purposes.  Combustible, environmentally unfriendly, radiation-emitting AirPods and the like are still very popular too.  This being the case, it is reasonable for companies to assume that people would be willing to stick other electronic devices in their ears, even ones designed to “eavesdrop on the brain.”

Born from Alphabet’s “moonshot” division, NextSense aims to sell earbuds that can collect heaps of neural data—and uncover the mysteries of gray matter.

Konstantin Borodin is an ear nerd. He’s been looking into them, literally and professionally, for more than a decade. Even in social situations, he’ll find his attention drifting lobeward. “Sometimes I get weird looks,” he says.

I met Borodin when he measured my ears and their outer canals for custom-fit buds that can pick up my brain waves. To create a mold, you usually have to fill the ear with a warm waxy substance, but Borodin uses a device called the eFit Scanner that measures its precise dimensions with a laser. The size of an Oculus Quest, the scanner has twin eyepieces and a metal camera nozzle that looks like a long stinger.

I swab my ears with rubbing alcohol—to make them less shiny, he says—and he positions me on a stool. At his urging, I wedge my head into a brace. “It helps to stabilize things,” says Borodin, who is now swooping toward me, gripping the gadget with both hands. He tilts my head and zeroes in on my left ear. “Hold that position,” he says.

“How many of these have you done?” I ask him.

“Over 30,000,” he replies. Even after all those ears, Borodin marvels at them–that no two are the same, that the nose and ears are the only organs that grow as one ages. But what has brought us together for this fitting is another useful property of ears: They are in the perfect spot to eavesdrop on the brain.

After acting as the scanner-in-chief for the company that invented the eFit, Borodin is now the lead ear spelunker for NextSense, which was born at Google and spun out of Alphabet’s X division. The startup’s focus is brain health—improving sleep, helping patients with epilepsy, and eventually enriching the lives of people with a range of mental conditions. The idea is to use its earbuds to capture an electroencephalogram, a standard tool for assessing brain activity. Just as an ECG tracks the fibrillations of the heart, an EEG is used to diagnose anomalies in brain activity. While some smart watches—Apple, Samsung, Fitbit—offer versions of an ECG and aim to spy on your sleep, collecting neural data has mostly been a can’t-try-this-at-home activity. Until now.

Standard EEGs are “a mess,” says Arshia Khan, a neurologist at the University of Minnesota, Duluth, who has done studies of those devices. To use the expensive machine in her lab, she has to fix electrodes to a person’s scalp. (“It leaves indentations on the head for a few hours, and if you use gel, it’s hard to shampoo it out.”) The device only works in a clinical setting and isn’t suitable for long-term studies. A handful of off-the-shelf, consumer EEG headsets are portable, but look incredibly awkward. If earbuds could deliver good results, that would be “fantastic,” she says. And not just for scientists.

For years, people have been shifting from tracking their health through sporadic visits to a doctor or lab to regularly monitoring their vitals themselves. The NextSense team is gambling that, with a gadget as familiar as an earbud, people will follow the same path with their brains. Then, with legions of folks wearing the buds for hours, days, and weeks on end, the company’s scientists hope they’ll amass an incredible data trove, in which they’ll uncover the hidden patterns of mental health.

For now, that’s the stuff of dreams. What’s real is that on one day in 2019, a patient tucked a bud into each ear, fell asleep, and proceeded to astound NextSense’s scientists—by churning out brain waves that showed exactly how this product could save a person’s life.

Jonathan Berent is the CEO of NextSense. On a recent evening, the 48-year-old was talking like a podcast at 1.5 speed while we waited for our entrées on the patio of an Italian restaurant in Mountain View, California. The subject of his filibuster was how he’d gotten into brain health. His obsession wasn’t ears or wellness; it was sleep.

Raised by his single mother and a coterie of relatives in Seymour, Indiana—the small town John Mellencamp sings about—Berent says he struggled to fit in and often got into trouble at school. He threw himself into his hobbies, among them writing tiny games that could fit into Commodore 64 cartridges. As a teenager, he stumbled upon a book on lucid dreaming, a semi-conscious middle ground where dreamers have a measure of control over their visions. Written by the field’s top expert, Stephen LaBerge, the book got Berent hooked on the slumbering mind. “The physical laws don’t apply, and the social laws don’t apply,” Berent says of sleep. At 18, he made his first journal entry in what has become a lifelong project of documenting his dreams.

Berent managed to get into Stanford, where he started studying computer science, only to freeze on a final in an introductory course. He switched to philosophy, figuring he’d catch up with his fellow geeks in the workplace later on. A philosophy major isn’t a gateway to great Silicon Valley jobs, however. After some searching, Berent landed an entry-level position at Sun Microsystems, in a backwater division reviewing contracts.

By 2011, he’d made his way to Google, where he joined a sales team supporting AdWords (now called Google Ads). He was good at it. He managed a large team and worked out of an office that he decorated like a wellness retreat, with a yoga mat and a “wisdom library” of be-here-nowness. (“I don’t think incense was burning there, but in my memory it kind of is,” says one visitor.) All the while, he was experimenting with polyphasic sleep—going to bed around 10 pm, waking up three or four hours later, and taking 20-minute naps throughout the day.

It wasn’t long before he crossed paths with another sleep obsessive, in a different AdWords office. Joe Owens had a doctorate in neuroscience focusing on sleep and circadian rhythms. Their first conversation was a marathon Google Meet session. Berent detailed his adventures in sleep hacking: As a morning person, he explained, his naps effectively gave him multiple fresh starts in which to energetically read about neuroscience, consume novels, and practice the drums. Owens was impressed. “I’d never met anybody going this hard at sleep from a personal point of view,” he says. Both wound up guest-lecturing in a famous Stanford course on the science of sleep, and soon the two men were batting around ideas for products that might enhance sleep. LaBerge, the lucid dreaming expert, had become a mentor, and he shared with Berent a research paper in which playing a sound to slumberers increased the slow waves that correspond to deeper sleep. Berent thought a product built on that insight might allow people to rest more efficiently—compressing eight hours of shut-eye into six.

In April 2016, Google announced it was starting an incubator called Area 120, its artisanal take on Y Combinator. Berent and Owens applied and got rejected, but they were pointed to X, Alphabet’s “moonshot” division, which takes on riskier, longer-term projects than Area 120. X picked up the project to supercharge sleep, and Owens started running it full-time. Berent stayed in the ads division but devoted some of his time to the project.

One of their first efforts was to launch a study with Phyllis Zee, a well-known neurologist at Northwestern University. They committed $500,000 to the experiment, in which they tried sending audio signals to earphone-wearing subjects to boost the slow waves of deeper sleep. That’s when they hit their first snag: Some participants responded as they’d hoped but others not at all, and they couldn’t figure out why.

Thinking again about the earphones from their sleep study, Berent wondered if he might be better off trying to collect brain data from the ear. That would help him observe not just sleep, but perhaps everything happening inside our heads. He discovered that a Georgia Tech professor—who coincidentally happened to be the technical lead and manager of Google Glass—was working along those lines. The researcher put him in touch with United Sciences, where Konstantin Borodin was doing laser-guided earbud fittings. That company had tried to build a system to perform EEGs through the ear. It had even launched a Kickstarter campaign. But the product never shipped, and the company abandoned the effort.

Berent got in touch and arranged to get fitted for the device himself. Naturally, he tried to test it in his sleep, even though the ear molds were made of an uncomfortable hard plastic. To his delight, he was able to get some measurable brain data. Berent quickly made a deal with the company. Now the ad exec turned brain hacker was on the hook to somehow make it work.

Jonathan Berent, the CEO, set out to help people hack their sleep—and ended up with a way to collect unprecedented amounts of brain data.

Let us know what you think about this article. Submit a letter to the editor at [email protected].

Share
Previous Where Did the Rest of the Internet Go?
Next President Kennedy Asked the FBI to Look Into Speaker Pelosi’s Father for Connections to the Mob – Documents Quietly Released Last Week Confirm This