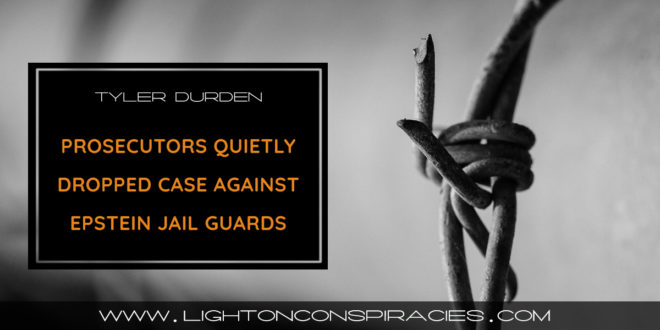 While Ghislaine Maxwell stood trial for her part in Jeffrey Epstein’s underage sex-trafficking operation, federal prosecutors quietly dropped their case against two jail guards who allegedly ‘slept on the job’ while the wealthy pedophile killed himself – or was murdered, depending on who you believe, or whether one has common sense.

On December 13, federal prosecutors in Manhattan signed a nolle prosequi, a document indicating to the judge that they wish to drop the case, according to Insider. The filing didn’t appear on the court’s public docket until Thursday, more than two weeks later, and one day after Maxwell was convicted for sex-trafficking girls to Epstein to be sexually abused.

The guards, Tova Noel and Michael Thomas, were arrested charged in November 2019. According to the original complaint, they two had fallen asleep, browsed news feeds, and shopped for motorcycles and furniture (with unexpected income, perhaps?), instead of performing their rounds at the Metropolitan Correctional Center. They were also charged with falsifying documents and conspiracy to defraud the US.

Did we mention that prison surveillance footage of the alleged suicide disappeared? Yes, we did.

Did we mention that Epstein had reportedly been in ‘good spirits‘ right before his suicide – meeting with his lawyers for up to 12 hours a day to discuss his case? Yes, we did.

Epstein, or a homeless guy in an Epstein mask, was found dead in his cell on the morning of August 10, 2019. While the NY City head coroner ruled it a suicide, Epstein’s brother hired a private coroner who ruled that the financier’s broken neck bones were more consistent with a homicide.

Noel and Thomas pleaded not guilty to the charges against them for falsifying records. In May this year, they entered a deferred prosecution agreement where prosecutors agreed not to bring the guards’ case to trial until after they finished cooperating with an investigation into the circumstances of Epstein’s death with the Justice Department’s Office of the Inspector General. The OIG has yet to release a report in connection with the investigation.

A public status conference for the case against Noel and Thomas had been scheduled for December 16, but was canceled on December 15 without explanation, or scheduling of a future meeting. -Insider

According to the December 13 filing, Noel and Thomas had complied with the terms of their non-prosecution agreement and completed community service.