Quarantined Musicians Give Performances From Their Balconies

As of Monday, there have been over 21,000 cases and 1,441 deaths in Italy (24,000, 1807 – Ed.), and the country’s healthcare system has now been overrun and doctors are being left with the difficult decision of rationing out treatment.

Residents are being told to stay indoors or face legal penalties, and the mood is very gloomy across the country due to the quarantine. As Truth Theory previously reported, people were taking to their balconies and open windows to sign together in some of the densely populated cities that are under lockdown.

This is a tradition that began in Wuhan, which was the first place in the world to go into quarantine as a result of the COVID-19 coronavirus. In the other areas that have since faced similar lockdown measures, citizens have done this to encourage one another and show solidarity with people in other nations who are stuck in the same situation. In the incredible video below, a dance music DJ took out his mixer and some speakers and gave a performance for his community from the balcony.

The Facebook video has now been seen over 20,000 times and collected over 21,000 comments.

Another video, from Barcelona, Spain, which is also currently under a quarantine lockdown, shows a musician playing a keyboard out on his balcony. Before long, the musician is joined by a neighbor who brought a saxophone out onto their balcony to join along. This video was also seen over 20,000 times by Facebook users around the world.

Residents of both Italy and Spain also applauded their medical workers from their windows and balconies.

Even though people are banned from going out in public, they are still doing everything they can to keep themselves and their neighbors in good spirits. There is no telling how long the quarantines will last, but residents are hoping that it will only be a few weeks.

Much of the daily content we publish is notable to us for various reasons. Having said that, the views and opinions expressed in this content, (articles, videos or any other content), are those of the authors and do not necessarily reflect the opinions of the authors of this site. As always, please do your own research. Please do not believe what you are told. Take what you like, and leave the rest.
Previous The Real SOUL of a Shoe – with Special Guests Ole Dammegard and Quinn Michaels
Next Tips For Getting Through A Quarantine With Children 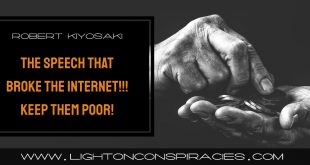