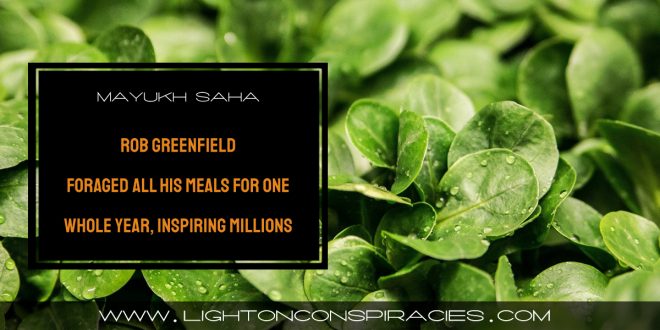 Rob Greenfield Foraged All His Meals For One Whole Year, Inspiring Millions Rob Greenfield has been on a special mission to spread the message of sustainable living and drive people to turn into radical environmental activists. He uses unusual approaches like wearing trash he generates, foraging his daily meals, and cycling around the US on a self-made bamboo cycle.

Rob Greenfield bound himself to a growing plant on the grounds of the defunct Berlin airport, Tempelhof. He uses that space to create a makeshift plot of the garden and eats the naturally growing greens of the garden.

From December, 2017, Rob Greenfield connected with several naturally growing food communities. He took many significant and life-altering lessons from them about growing local produce and planting gardens outside one’s home. Consequently, he learned to grow his own food in an ecological manner. Greenfield has recently spent an entire year growing and foraging for his food. Meanwhile, he was living in a ‘tiny house’ of 100 square feet. He built his house from recyclable materials found in the backyard of Orlando that is the fastest growing city in America. He informed that he wanted people to pass by his sustainable home and get inspired to grow their own food. Additionally, he wants people to reduce waste production and live an eco-friendly life.

Furthermore, he did not shower for a year to promote the idea of water conservation. He chose Orlando city in Florida as his sustainable living home for one year and sowed deep figurative and literal roots to inspire people. He wanted to motivate radical sustainability by driving people to grow and forage for their own food for a considerable period of time.

Greenfield took 10 months of intensive preparation for his project, Food Freedom. He gathered seeds, built a greenhouse along with exploring local permaculture in Orlando. He started his journey on 11th November 2018. Additionally, he wrote about his daunting intent outside his tiny house. What does 100% food foraging for a calendar year entail? Rob Greenfield explains that he took baby steps and made small changes to his consumerist living — reusable shopping bags and water bottles, cycling, using second-hand products, and choosing locally sourced products over Walmart. He accepted no food from friends or neighbors. He lived in tiny solar-powered houses, remained off-the-grid, and traveled across the US penniless for a year.

Earlier, he had 2 small beds for growing tomatoes, herbs, and greens in San Diego. Subsequently, he was not an expert at gardening, let alone farming. Rob Greenfield chose Florida because the weather permits year-round farming. Additionally, he was impressed with the local food culture where people exchanged homegrown greens in their front-yards. He considered them a like-minded community that hosted workshops and cooking series.

He also asked local people about easy growing greens and low maintenance plants. He made a list of the 100 foods that he grew as well as foraged and made it available for the public. These include Seminole pumpkin, southern peas, and directly sea-acquired salt.

Rob Greenfield harvested deer which were hit by cars in Wisconsin. He cooked and fed deer stew to most of his vegetarian family members who liked it. Although the lack of oil altered the taste a little, other herbs and spices made up for it.

Rob Greenfield celebrated the last day of his environmentalist year on 10th November. He conducted a potluck with local people. Finally, he left Orlando and started to travel to motivate ecological activism. He wants people to build communities to grow food and change the consumerist food system. He wants each person to make an effort and bring the change.