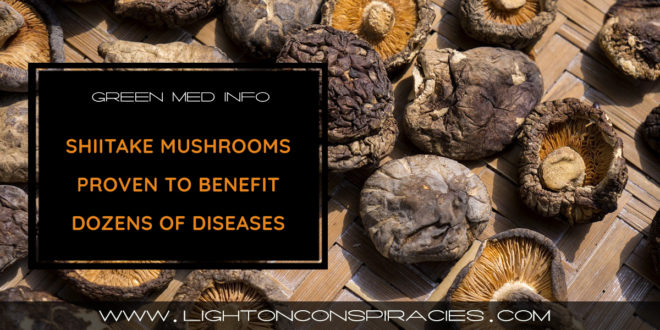 If you’re looking for a superfood to support your immune system health and act as an overall health tonic, shiitake mushrooms are a top choice. As a bonus, they impart a savory umami flavor to virtually any meal they touch.

Shiitake mushrooms (Lentinus edodes) have been prized for their anticancer and immunomodulating properties since ancient times and are a mainstay of traditional Chinese medicine. Historically, shiitake mushrooms were harvested from mountainous regions in Asia, but today they’re the second most widely cultivated mushroom variety in the world — second only to the common button mushroom.[i]

Shiitake mushrooms are also a popular culinary-medicinal mushroom in Japan, and the word shiitake comes from the Japanese words shii, or “from a hardwood tree,” and “take,” or “mushroom.”[ii]

Their rich, earthy, almost buttery flavor is packed with umami, the fifth taste that’s hard to put into words but is often described as meaty and savory. This makes them an ideal meat substitute in vegetarian dishes and a worthy addition to soups, stews, seafood and poultry dishes. Looking for even more good reasons to add shiitake mushrooms to your meals? They’re linked to notable benefits to your health.

A Shiitake a Day Keeps the Doctor Away

Shiitake mushrooms are a rich source of protein, fiber, minerals and vitamins, including B1, B2, B12, C, D and niacin, as well as antioxidants and beta-glucans.[iii] They contain the most vitamin D of any plant food.[iv]

A form of beta-glucans in shiitake mushrooms, known as lentinans, are believed to play a role in their immunomodulatory effects, while other beta-glucans have documented stimulatory effects on the immune system that are strong enough to ward off influenza in animal studies.[v]

Lentinan extracts have also been found to produce immunomodulatory and pulmonary cytoprotective effects that can reduce oxidative stress, activate beneficial macrophages that are part of your innate immune system and even ameliorate the inflammatory cytokine storm that causes potentially fatal acute respiratory distress syndrome (ARDS).[vi]

Even eating a reasonable amount — 4 ounces — of dried shiitake mushrooms daily can have a significant impact on your immune function. When researchers gave a daily four-ounce serving of dried shiitake mushrooms to healthy adults between the ages of 21 and 41 for four weeks, improved immunity resulted, including increased cell proliferation and reduced C-reactive protein, a measure of inflammation.[vii]

The immunomodulatory effects of lentinans are so strong that they also reduced infection by antibiotic-resistant Klebsiella pneumoniae bacteria that had led to pulmonary sepsis in rodents. Bacterial infection is a leading cause of ARDS, which in turn is often lethal in critically ill patients, but administration of lentinan to bolster the immune system may be a promising solution.[viii]

By boosting your immune system, shiitake mushrooms have notable anticancer effects. Some research also suggests they may have antitumor activity that works on cells directly, even without immune system involvement.[ix]

When taken orally, lentinan extract from shiitake mushrooms led to significant regression in tumor formation in mice with colon cancer.[x] It also led to “remarkable” antitumor effects in mice “not only by enhancing the immunity but also by directly killing the tumor and the induction of tumor cell apoptosis … .”[xi]

Even in the case of advanced pancreatic cancer, lentinan increased patients’ survival time and improved quality of life.[xii] What’s more, beta-glucans from shiitake mushrooms are capable of selectively inducing cell death of breast cancer cells while leaving healthy cells untouched,[xiii] while mycelia extract from the mushroom reduced the incidence of adverse effects from chemotherapy when taken by patients with advanced cancer.[xiv]

Active hexose correlated compound (AHCC), a supplement that’s made from shiitake mushroom mycelia, is made up of a powerful mixture of amino acids, minerals and polysaccharides. It acts as an immune system enhancer against tumor cells and pathogens[xv] and is the second most popular complementary and alternative medicine used by cancer patients in Japan.[xvi]

Lentinan has also been singled out as a promising therapy for a number of human cancers, including:[xvii]

Shiitakes as a Health Tonic

Like many whole foods, the synergistic effects of the nutrients and polysaccharides in shiitake mushrooms provide nourishing support for your whole body. Shiitake mushroom bars were described as a “nutritious food and a functional health food alternative” in the International Journal of Medicinal Mushrooms, in part because they lowered triglyceride levels by 10% after 66 days of consumption.[xviii] Studies have found shiitake extracts to be:[xix],[xx]

In addition, beta-glucans in mushrooms like shiitakes increase intestinal viscosity, which reduces cholesterol absorption and promotes its excretion. They’re therefore useful for optimizing cholesterol levels and have also been shown to have a favorable effect on other conditions including high blood pressure, diabetes and infectious diseases.[xxi]

At GreenMedInfo.com, you can browse through nearly 50 disease and conditions that shiitake mushrooms may support. Among them:

How to Enjoy Shiitake Mushrooms

Fresh shiitake mushrooms work well sliced thickly, especially when used for their meaty flavor and texture. Look for shiitakes with thick, domed caps[xxii] — it’s the cap that you’ll be eating, since the stems are quite tough. After rinsing the mushrooms gently or wiping them off with a damp cloth, trim off the stems, which you can save to add flavor to soup, pasta sauce or stew.

Fresh shiitake mushroom caps can be quickly sautéed or stir-fried. If you choose to use the stems, add them first since they take longer to cook. Dried shiitake mushrooms are also popular, but you’ll need to rehydrate them in hot water for about 20 minutes before cooking.[xxiii] The liquid from re-hydrated dried mushrooms can also be used as a base for vegetable broth and is an important part of dashi, a Japanese soup stock.[xxiv]

The GMI Research Group (GMIRG) is dedicated to investigating the most important health and environmental issues of the day.  Special emphasis will be placed on environmental health.  Our focused and deep research will explore the many ways in which the present condition of the human body directly reflects the true state of the ambient environment.

Disclaimer: This article is not intended to provide medical advice, diagnosis or treatment. Views expressed here do not necessarily reflect those of GreenMedInfo or its staff.

Share
Previous One Man’s Mission to Revive the Last Redwood Forests | Short Film Showcase
Next Is There A Mass Awakening Happening in 2021?