Six Graphs Showing Just How Much the Government Has Grown Federal spending and federal taxation in the United States set new records in 2019. And the federal budget deficit swelled to more than a trillion dollars. Europe is in the middle of an enormous spending binge. But apparently hard-core laissez-faire libertarian purists have taken over the world’s governments.

At least, that’s the case in the minds of many leftists and conservatives who have convinced themselves that “market fundamentalists” have conquered the world’s institutions, and have enacted a global regime of near-zero taxation, free trade, and almost totally unregulated markets.

We hear this over an over again when everyone from The Pope to Bernie Sanders claims “neoliberalism” — a term used to “denote… a radical, far-reaching application of free-market economics unprecedented in speed, scope, or ambition” — has forged the world into a paradise for radical libertarians.

As one writer at The Guardian assures us, the UK must end the nation’s “generation-long experiment in market fundamentalism.” Meanwhile, Tucker Carlson insists that American policymakers “worship” markets and have a near-religious devotion to capitalism.

The neoliberal takeover is so complete, in fact, that we’re told neoliberals are the ones really running the Labour Party. Meanwhile, sociologist Lawrence Busch informs us of a “neoliberal takeover” of higher education. “Free-market fundamentalists,” Busch contends, have transformed America’s colleges and universities into swamps of capitalist obeisance.

But whenever I hear about how government intervention in the marketplace is withering away — to be replaced by untrammeled markets — I am forced to wonder what metric these people are using.

By what measure are governments getting smaller, weaker, and less involved in the daily lives of human beings?

In this country, at least, this case certainly can’t be made by consulting the data on government taxation and spending. 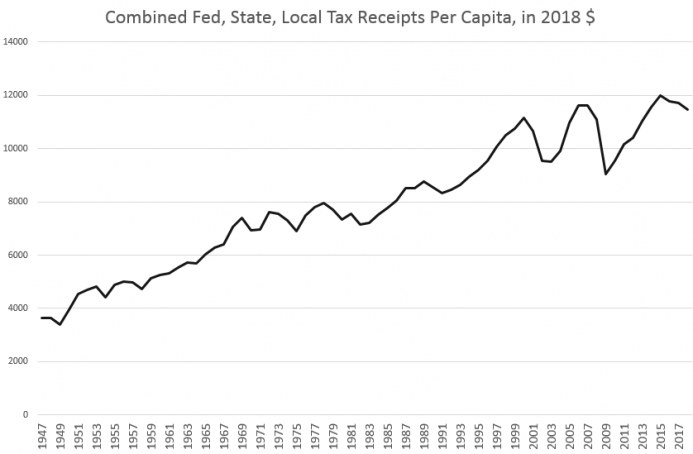 The size and scope of government isn’t just growing to reflect population changes. After all, the US population only grew 81 percent from 1960 to 2018. And the federal government, embroiled in a global cold war amidst a rising tide of social programs, wasn’t exactly vanishingly small in 1960. 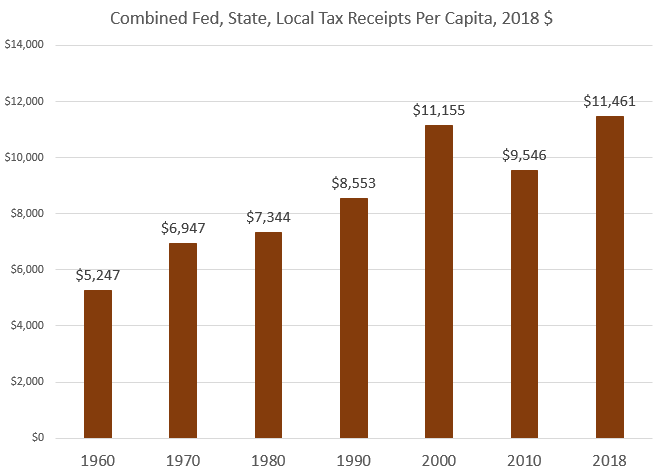 In all these per capita graphs, I’ve factored in population growth because many defenders of government growth claim that governments must get larger as populations increase. Even if that were true, we can see that total spending and taxation is outpacing population growth considerably.1 But it should not simply be accepted that population growth ought to bring increases in government spending and taxation. Military defense of the United States doesn’t become more expensive simply because the population grew. Moreover, innovation and productivity gains make products and services less expensive in a functioning private economy. This is often masked by relentless money supply inflation in the name of price “stability.” But the natural progression of an economy is toward falling prices. Only with government procurements have we come to expect everything getting more expensive every year. 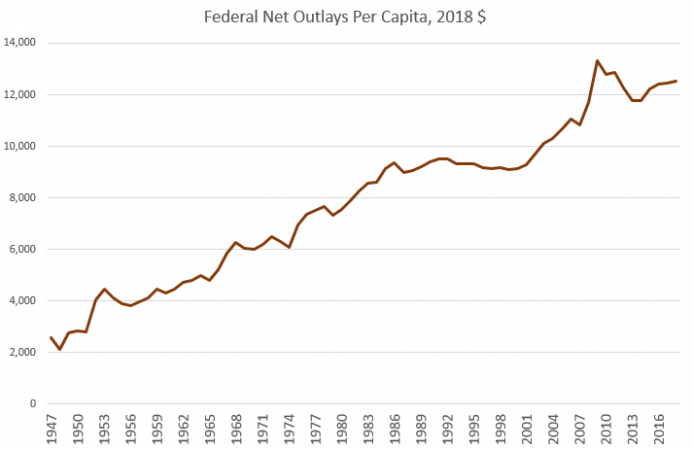 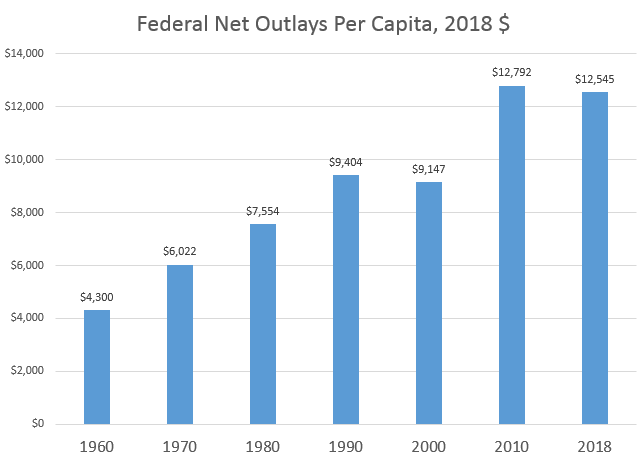 The deficit topped a trillion dollars during the 2019 fiscal year, a new high for a so-called “boom period” during which deficits are supposed to shrink.

Ultimately, of course, huge deficits will put an additional burden on the taxpayers beyond the hundreds of billions of dollars per year necessary to simply pay interest on the debt. The huge debt levels put upward pressure on interest rates, and require more central-bank interventions designed to prop up demand for government debt. These interventions both crowd out demand for private debt, and have led to asset-price inflation as a result of money-supply inflation. This benefits the wealthy, but harms first time home buyers and ordinary savers.

As Murray Rothbard has noted, however, government spending is just as damaging as the taxation that came before it. Government procurements bid up the prices of goods and services that could have been available at lower prices in the private sector were it not for the government spending. Steel and other materials would be less expensive for entrepreneurs. High tech workers could be employed innovating and making things for ordinary taxpayers instead of for government agencies and bureaucrats. Small business owners and ordinary consumers all are worse off as a result.

So, given that spending and taxation are at or are near all-time highs right now, where exactly is this takeover by laissez-faire libertarians we keep hearing about?

It’s certainly not in the regulatory side of the government.

The number of pages published in the Code of Federal Regulations increased 710 percent from 1960 to 2018, and 37 percent over the past twenty years. Every additional page represents new regulations, new rules, new punishments, and new fees. These are costs employers must contend with, and consumers must ultimately pay for. Protectionists who think that manufacturers would flock to the United States were it not not low tariffs might consider the regulatory burden placed on employers by our own domestic policies. 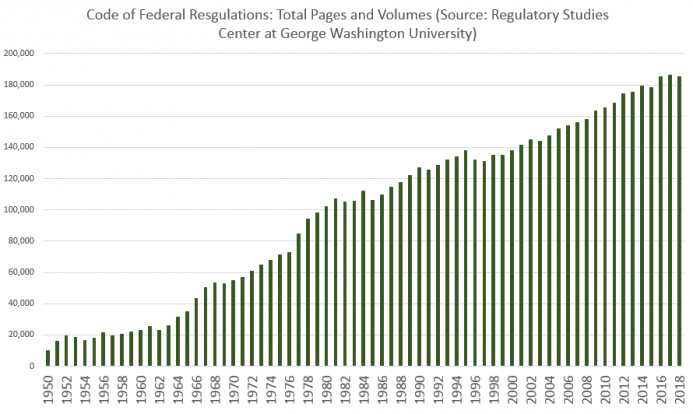 Part of this has been to pay salaries for the ever growing army of federal employees. Employees at regulatory agencies doubled over the past forty years, rising from 140,000 full-time equivalent positions in 1978 to 280,000 today. 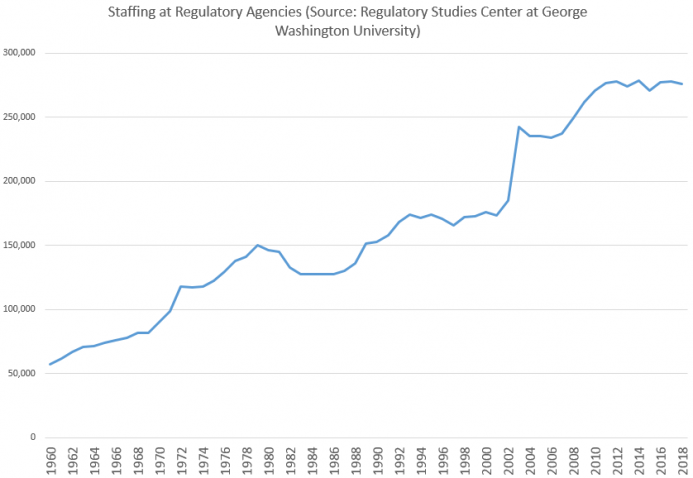 The US population increased by 47 percent during that time.

When the federal government isn’t spending more, it’s taking on more risk, committing the taxpayers to more bailouts, and flooding the market with government insured debt. As The Washington Post reported earlier this month, “In 2019, there is more government-backed housing debt than at any other point in U.S. history.” And these government guarantees are up considerably since the 2009 housing crash. The Post continues: “Now, Fannie Mae, Freddie Mac and the Federal Housing Administration guarantee almost $7 trillion in mortgage-related debt, 33% more than before the housing crisis … Because these entities are run or backstopped by the U.S. government, a large increase in loan defaults could cost taxpayers hundreds of billions of dollars.”

Yet, in spite of all this, we’ll no doubt continue to be told that government is withering away, government institutions are “underfunded,” and extreme anti-government libertarians have taken over. Of course, it’s entirely possible that the success of certain free-market ideas — however limited that success may be — has helped to restrain the growth of government taxation and spending. Without this so-called “victory” of the libertarians, we might be looking at a per capita tax burden that grew 200 or 300 percent in recent decades, rather than a “mere” 118 percent.

But given the ongoing growth of government taxation, spending, and regulation, it should be abundantly clear that we are hardly living in an age of “market fundamentalism,” laissez-faire libertarianism, or policymakers who “worship” the market. If anything, trends appear to be moving in exactly the opposite direction.

Ryan McMaken (@ryanmcmaken) is a senior editor at the Mises Institute. Send him your article submissions for Mises Wire and The Austrian, but read article guidelines first. Ryan has degrees in economics and political science from the University of Colorado, and was the economist for the Colorado Division of Housing from 2009 to 2014. He is the author of Commie Cowboys: The Bourgeoisie and the Nation-State in the Western Genre.

This article was sourced from Mises.org.

Much of the daily content we publish is notable to us for various reasons. Having said that, the views and opinions expressed in this content, (articles, videos or any other content), are those of the authors and do not necessarily reflect the opinions of the authors of this site. As always, please do your own research. Please do not believe what you are told. Take what you like, and leave the rest.
Previous Samantha Baldwin Exposes Britain’s Darkest Secret – the Family Courts
Next Bees dying under 5G poles 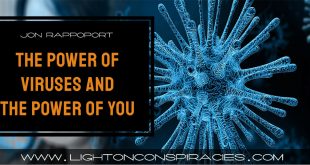 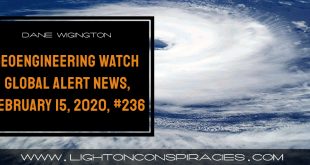