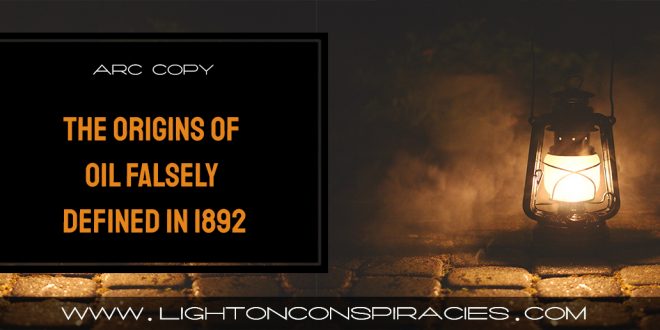 The Origins of Oil falsely defined in 1892

Col Fletcher Prouty explains how oil was falsely classified a “fossil fuel” in 1892 and how that deception was advanced further in the 70’s by Kissinger and Rockefeller. TRANSCRIPTION Petroleum is NOT what we thought it was . . . Petroleum is NOT a fossil fuel and did not come from dead dinosaurs . . .
When they first found petroleum they needed it for motors and axles for railroad trains and those sort of things. Trains started in the beginning of the 19th century and then oil went from just a lubricant to a fuel and that made it valuable. Rockefeller happened to be the smartest in the business at the time and he made most of his money off the transport of petroleum as well as selling it. But one thing they realized was that putting a price on oil is like putting a price on pail of water . . because there is NO initial cost – the oil is in the ground. In those days they were surface mining the petroleum – they did not go down deep. So in order to get the price up they hit on the idea they would have to make it appear to be scarce. In other words after they take the next few barrels out they would have to close the well . . In 1892 there was a convention in Genova of scientists to determine what organic substances are.
The definition of organic is a substance with hydrogen, oxygen, and carbon. . and so it’s usually a living substance like a tree etc. You analyze a dead tree hydrogen, oxygen and carbon and grass and so on – living things are oxygen, hydrogen and carbon . . so at the Genova convention Rockefeller took advantage of sending some scientists over who said “oil – petroleum” is hydrogen, oxygen, and carbon. Therefore it must be derived from the rotting of formerly living matter. And playing the game properly the scientists defined oil as a residue of formerly living matter. Well that said – that makes it a fossil fuel. . It was not certain why the called it fossil, but fossils are formerly living matter . . and of course today there has never been a fossil found below 16,000 feet . . . you can’t argue that 16,000 feet is a level line because some places sink. But 16,000 feet is what the scientists say fossils are not found below . . . We drill for oil at 28,000 to 30,000 to 33,000 feet everyday of the week. Right there we rule out that petroleum it is not fossil fuel . . . It’s called fossil fuel for the minds of the public to feel that it is an asset that is running out, being depleted so they get a depletion allowance . . actually if you know the worlds oil supply you know it is not going to run out for an awfully long time. Oil is the second most prevalent liquid on Earth. With all this background the people in charge of the petroleum business, for perfectly reasonable business goals, just like any other business want to keep the prices as high as can be gotten away with. And the way to do that is to say “no more” the last barrel will cost $1,000. and then it’s all gone . . . They preach this false reality – in geology books this information is explained . . .
Many Geologists say that petroleum is a fossil fuel somehow have been bought and sold out to the deliberate misinformation scheme . Col. Prouty went to a four year federal staff energy seminar run by the government of the United States during the so called energy crisis. He was the participant that represented the railroad industry. The airline industry was there, every (AA) Administrative Assistant of every Congressmen was there, the CIA, the Defense Dept., the State Dept., sometimes sitting right in front of Col Prouty was Kissinger and Schlesinger the head of the Department of Defense, top men in the government sitting there listening to the federal energy staff seminar. Well what this was doing was for four years they were teaching a propaganda line to the leading people in this country and therefore the leading people in the World. The object of this was as Kissinger used in his own terms to create a world price for oil. In other words not 30 cents a gallon here and 40 cents a gallon there lets get a world price . That was their goal and they were planning to do this for wheat and everything else. We don’t realize what the controls are whether it’s oil or other things. Everything today is being categorized at the highest price they can possibly create. And so calling petroleum a fossil fuel is the basis for this system in respect to petroleum . . . All this started from that strange meeting in Genova in 1892. . This is not accidental there is a dollar sign behind almost everything. . .
Please take a moment to support Ole on Patreon!