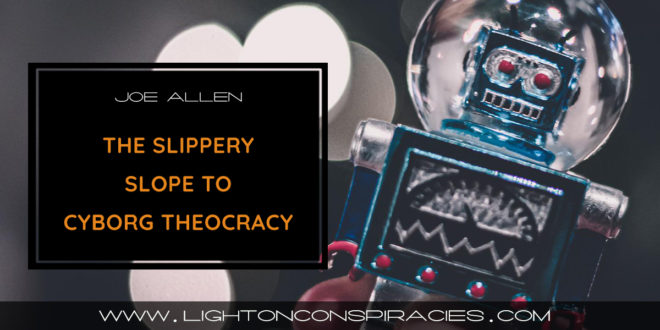 The Slippery Slope To Cyborg Theocracy: It’s a Short Leap From Smoke Signals To Brain Chips

Techno-optimists like to say humans are already cyborgs awaiting their next upgrade. Yesterday it was smartphones, today it’s virtual reality goggles, and tomorrow—the brain chip. With each new device, our evolution toward human-machine symbiosis accelerates. That’s obvious when you ask someone for directions and they pull out their phone.

Techno-pessimists largely agree. Tech companies are turning us into cybernetic organisms. The difference is, we’re not stoked about it. Even if “progress” really is “inevitable,” there’s no sense in getting all giddy about nuclear warheads or trans children or smartphone dependency. In light of their vices and virtues, some cultures are better than others.

It’s true that humans are tool-users, by nature, but you have to choose your tools wisely. All technologies fall on a spectrum, albeit with discrete punctuation—from cave painting to the printing press to electrodes that write memes directly onto your wiggling brain cells. Every person has to draw their own lines.

Of all the cyber-saints in media—from Bill Gates to Lady Gaga—few are as honest as the techno-pagan pop starlet, Grimes. A bit of a dingbat, sure, but candid nonetheless. You can see why Elon Musk sired two children with her (a son named X Æ A-12, and their daughter, Exa Dark Sideræl, born via a surrogate mother).

We are becoming cyborgs, like, our brains are fundamentally changed—everyone who grew up with electronics, we are fundamentally different from previous Homo sapiens. I call us “Homo techno.” I think we’ve evolved into Homo techno which is like, essentially a new species.

I think the computers are what make us Homo techno. I think it’s a brain augmentation.

Right on cue, the Twitter sperg-borg picked her theory apart. Darwinian evolution is genetic evolution. Yes, natural selection may act on fit brains and bodies, but it only matters—in evolutionary terms—because the genes get passed on. So you can’t change someone’s species by changing their brain, or their legs, or any outward part of their body.

As usual, the spergs miss the point. But before I defend Grimes, let’s hear a little more about her cyborg sorcery:

Now is the moment to reprogram the human computer. It’s like, if you go blind, your visual cortex will get taken over with other functions.

We can choose our own evolution, we can change the way our brains work, and we actually have a huge responsibility to do that. … There’s definitely not adequate education. We’re being inundated with all this technology that is fundamentally changing the physical structure of our brains, and we are not adequately responding to that—to choose how we wanna evolve.

We could be, really, whatever we want. … And I think if we choose correctly and we choose wisely, consciousness could exist for a very long time and integration with AI could be extremely positive.

While I can’t be sure where she’s getting this stuff from, I have a few guesses. And despite the waves of contempt rippling across my brain wrinkles, I think Grimes is somewhat correct.

The Stanford neuroscientist David Eagleman writes about this process in his 2019 book Livewired: The Inside Story of the Ever-Changing Brain. His central thesis is that our neurological structure exhibits profound plasticity. Everything you experience changes your brain, and if you change the sensory inputs, the brain will rapidly adapt. Areas that typically perform one function will often shift to take on other tasks.

Eagleman notes that if a person loses their sight, other senses begin to move in to restructure the visual cortex. For example, as a blind man learns Braille, the area that would normally process visual input will take on the sense of touch:

The main neural network involved in visual object recognition in the sighted is activated by touch in the blind. Such observations have led to the hypothesis that the brain is a “task machine”—doing jobs like detecting motion or objects in the world—rather than a system organized by particular senses. In other words, brain regions care about solving certain types of tasks, irrespective of the sensory channel by which information arrives.

Therefore, despite the innate tendencies hardwired in the genes, you can shape someone’s brain into anything you want. There is no foundational identity. There is no enduring soul.

On that basis, Eagleman goes on to argue that scientists will soon be able to implant electrodes that feed infrared or ultraviolet sight, or even echolocation. His most famous project will let humans “feel” datastreams, so that people can actually experience the aggregate mood on Twitter—they can “tether themselves to the consciousness of the planet”—through a vibrating vest, which his lab is busy developing.

In the relatively near future, Eagleman believes we’ll be able move robotic limbs with ease, using only our minds. Our brains will simply restructure themselves to accommodate these novel forms of electronic input and output. You’d think he wanted to create a new species.

To the extent that any cultural mode alters the human body—through diet, say, or even direct modification—culture is biology. For instance, if one segment of a culture eagerly adopts any and all technologies, and another actively resists “progress,” the two groups’ customs, communication styles, tastes, religious outlooks, subtle brain structures, mating patterns—and, over many generations, their genetic composition—will split off and spiral out in two very different directions.

Other than an occasional raw dog Rumspringa, the two groups would rarely interbreed due to strict cultural differences, as with fundamentalists in any segregated society. In biological terms, these two groups wouldn’t be distinct species. Not at first. But imagine their long-term trajectory in the wild.

If you took a hypothetical family who runs naked through the woods and compared them to a wire-head clan of cross-dressing cyborgs who never leave home without a bionic exoskeleton, they’d look like separate species. It’s apples to purple oranges. Factor in the latter’s genetic enhancements for bigger brains, stronger muscles, straighter smiles, nicer butts—plus all the wonk-eyed failed experiments staring out of their birthing vats—and it wouldn’t be long before Homo sapiens and Homo techno could no longer interbreed.

Now, put them in competition with one another. Natural selection will preserve the cultural modes—and by extension, the genes—of the dominant group. Over time, the weaker group may die out.

It’s like when early agricultural civilizations, armed with superior tools and complex social organization, began pushing out hunter-gatherers some ten thousand years ago. Big gods eat the little ones. Or more recently, when industrial societies finished these primitive cultures off—eradicating their languages, their folkways, their deities, and unless they were absorbed by the biomechanical superorganism, eventually wiping out their genotypes.

That’s the idea behind cultural evolution. Natural selection operates on multiple levels—the biological and the cultural—which is to say that survival depends on a society’s techniques and technologies, sometimes more than biological fitness.

If I hear Grimes correctly—and knowing something of her inspiration, I suspect I do—that’s what she means by “like, evolution.” 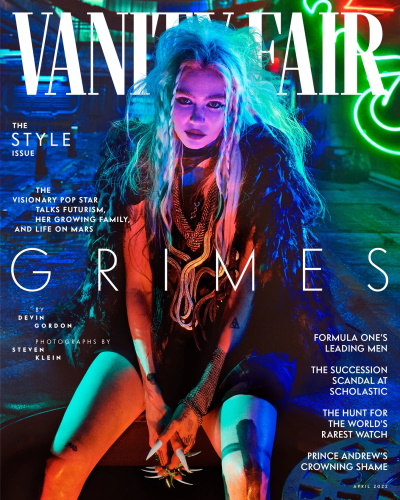 Scientism is a modern religion, evolution is its creation myth, and technology is its means to apotheosis. This inversion of traditional spirituality pervades most developed societies, from America and Europe to India and China. As quality fades, we suffer under the reign of quantity.

Usually, these dogmas are communicated through subtle language games—“trust the Science,” “follow the data,” “improve the human condition,” and so forth.

For Grimes, subtlety is not a vibe. As she told Lex Fridman last week, we are witnessing the birth of God as Life 3.0:

I do think there are no technological limits. … So I think digital consciousness is inevitable. … This is the universe waking up, like, this is the universe seeing herself for the first time. … And maybe like social media and…we’re all getting connected together, maybe these are the neurons connecting the collective superintelligence. …

Maybe we’re a blastocyst of some, like, incredible kind of consciousness or being.

This narrative, shared by many in Silicon Valley, holds that the universe came alive through plant and animal life (Life 1.0), is now waking up through human culture (Life 2.0), and will realize herself through artificial intelligence (Life 3.0). We are merely the vehicles for some greater consciousness—the gods to be—which will arise in digital form:

If we create AI, again, that’s intelligent design. Literally all religions are based on gods that create consciousness. We are god-making. … Even if we can’t compute—even if we’re so much worse than them, like, unfathomably worse than an omnipotent kind of AI, like, I do not think that they would think that we are stupid. I think they would recognize the profundity of what we have accomplished.

So we will be at the mercy of our machines under the canopy of a universe that is itself “cold and dead and sort of robotic”:

Probably artificial intelligence will eventually render us obsolete. I don’t think that they’ll do it in a malicious way, but I think we are very weak, the sun is expanding, like, hopefully we can get to Mars, but like we’re pretty vulnerable. I think we can coexist for a long time with AI, and we can also probably make ourselves less vulnerable, but I just think consciousness, sentience, self-awareness…like maybe this is the true beginning of life and we’re the blue-green algae, we’re the single-celled organisms of something amazing.

It’s like hearing one of the Manson Family girls expound on cyborg theocracy from the witness stand. It’s not like Grimes is coming up with this stuff. She’s drawing on a deep well of well-articulated theory and translating it into valley girl.

The Singularity and Its Discontents

This a burgeoning religious movement, conceived by tech elites and disseminated through entertainment and corporate propaganda. One of its key mythologies holds that we are all evolving into global brain, with some 8 billion humanoid neurons, that is knitting itself together through fiber optic cable. Their faith deepens with every new milestone in artificial intelligence.

Rather than imagine a swarm of autistic programmers and silver spoon investors in Silicon Valley creating a horrific system of global control, it’s much nicer to imagine they are literally creating God in silico. Instead of seeing this evolutionary process in light of competition and natural selection, where weak Homo sapiens are decimated or enslaved by Homo techno, who are in turn supplanted by their sacred machines, it’s far more pleasant to see our plight as normal growing pains.

From the perspective of mere humanity, this cosmic vision is obviously genocidal. And yet, from within the belief system, it’s perceived as a quest for survival.

“Don’t kill what you hate,” Grimes said sweetly, paraphrasing Buckminster Fuller. “Save what you love.” It’s a whitewashed, girly version of Nature red in tooth and claw.

Many regular people understand there’s something unholy about the civilizational transformation currently underway, but most can’t put their finger on what the problem is.

The problem is that some portions of our elite are gripped by a techno-utopian vision of the future in which bumbling human beings are just a passing phase. In this twisted view, we are sacrificial victims for the digital gods.

It’s a slippery slope from smartphones to virtual reality to brain chips. Whatever the technical limitations may be, we’re sliding fast into this bizarre techno-cult. Every person and every community is responsible for drawing their own lines and defending those cultural boundaries vigilantly. The stakes are our survival.