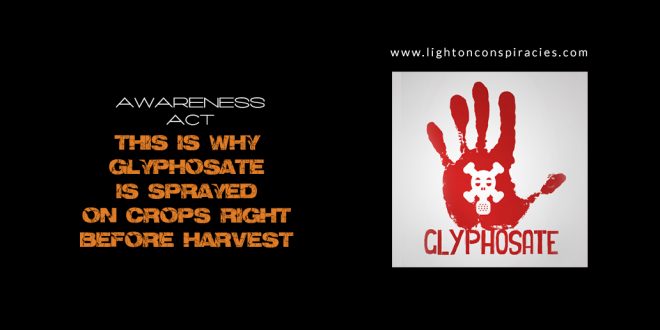 This Is Why Glyphosate Is Sprayed On Crops Right Before Harvest

Most people do not realize how much pesticide is actually sprayed on the food they ingest before it makes its way to their plate. While you might not realize that pesticides are sprayed all over many crops just before harvest, it is something you need to make yourself aware of.

Glyphosate is sprayed all over all kinds of crops before harvest, and as you may know, is the main ingredient in Monsanto’s Roundup. Roundup is easily the world’s most well known and well-used weed killer. It is used on things like wheat, oats, and so forth. Glyphosate is not something we should be using at all, yet it is sprayed all over the things we eat, why is this?

Glyphosate is listed as a possible carcinogen and can cause a whole host of health issues for us all. There is a growing body of research against it and it has been linked with far more things than you could ever imagine. Not only does it cause damage to your DNA, it also causes birth defects.

Now, glyphosate is sprayed on crops because it allows the farmers to begin harvesting sooner. It speeds up the drying process and also keeps it drying evenly. There has been a huge increase in the use of glyphosate in the past ten years. This growing as things like GMO corn and so forth are expanding rapidly. Through killing their crops with glyphosate farmers are able to accelerate things.

This application is known as the pre-harvest roundup and is carried out on many both conventional and industrial farms. It is something we’ve been doing since around the 1980s and it’s not dying off anytime soon. This is known as desiccation.

While this does put less strain on equipment and make things go over a little easier and more quickly for the farmers, when it comes to the consumer’s things are a bit fishy. Considering several countries in the EU have banned glyphosate altogether, should we really be eating food that is sprayed with it?

What do you think about all of this? Do you think it is something we should be doing or do you think it’s a dangerous corner to cut for convenience? Feel free to check out the video below for more information on glyphosate.

Previous LIVE – TOP of the New World Trade Center!!!
Next Science Explains What Happens To Someone’s Brain From Complaining Too Much