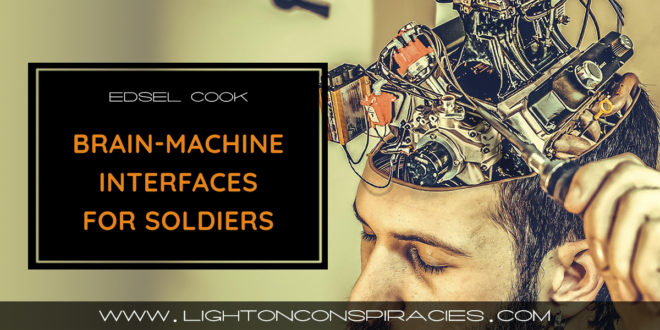 One of the last things anyone should want is a machine-brain interface, even if it is a non-invasive type that doesn’t require brain surgery. However, the US military recently announced that it was throwing money at half a dozen organizations to come up with a system that lets its user control equipment with a thought.

The Defense Advanced Research Projects Agency (DARPA) wants American soldiers to have the ability to use their equipment with their minds. A brain-machine interface would allow them to drive their automated vehicles and fire their weapons by merely thinking the command.

To achieve its objective, the agency revealed the Next-Generation Nonsurgical Neurotechnology (N3) program. DARPA offered to provide six companies with the funding to design and develop a non-invasive machine-brain interface for American troops.

As imagined by DARPA, a user will wear a brain-machine interface on his head, perhaps indicating that it will fit underneath a helmet. The device will scan the wearer’s brainwaves and translate his brain activity into orders.

Using the non-invasive interface, an American soldier may send out swarms of attack drones, defend computer systems against cyber attack, or ensure efficient lines of communications.

“DARPA is preparing for a future in which a combination of unmanned systems, artificial intelligence, and cyber operations may cause conflicts to play out on timelines that are too short for humans to effectively manage with current technology alone,” explained N3 program manager Al Emondi.

“By creating a more accessible brain-machine interface that doesn’t require surgery to use, DARPA could deliver tools that allow mission commanders to remain meaningfully involved in dynamic operations that unfold at rapid speed.”

DARPA reportedly set aggressive benchmarks and timelines for the completion of preliminary examples of the machine-brain interface. Further, the agency also poured a considerable amount of funding into the program.

Two of the organizations participating in the N3 program reported receiving between $18 to $19.5 million of grant money.

For nearly two decades, DARPA has investigated and evaluated increasingly advanced brain-to-computer interfaces. It has come up with ways to control prosthetic limbs, restore the somatic (touch-related) sense of people using prosthetic parts, treat depression and other mental illnesses, and enhance the formation and recall of memory.

The neurotechnology depended on surgically implanted electrodes to work with the central or peripheral nervous systems.

The non-invasive machine-brain interface expected from the N3 program will avoid surgical approaches. It will employ wearable electronics equipment that will pick up brain signals.

“If N3 is successful, we’ll end up with wearable neural interface systems that can communicate with the brain from a range of just a few millimeters, moving neurotechnology beyond the clinic and into practical use for national security,” Emondi promised.

“Just as service members put on protective and tactical gear in preparation for a mission, in the future they might put on a headset containing a neural interface, use the technology however it’s needed, then put the tool aside when the mission is complete.”

Potential approaches include using ultrasound technology to scan the brainwaves of the user and swallowing a nano-sized transducer that passes data to a transceiver on the helmet.