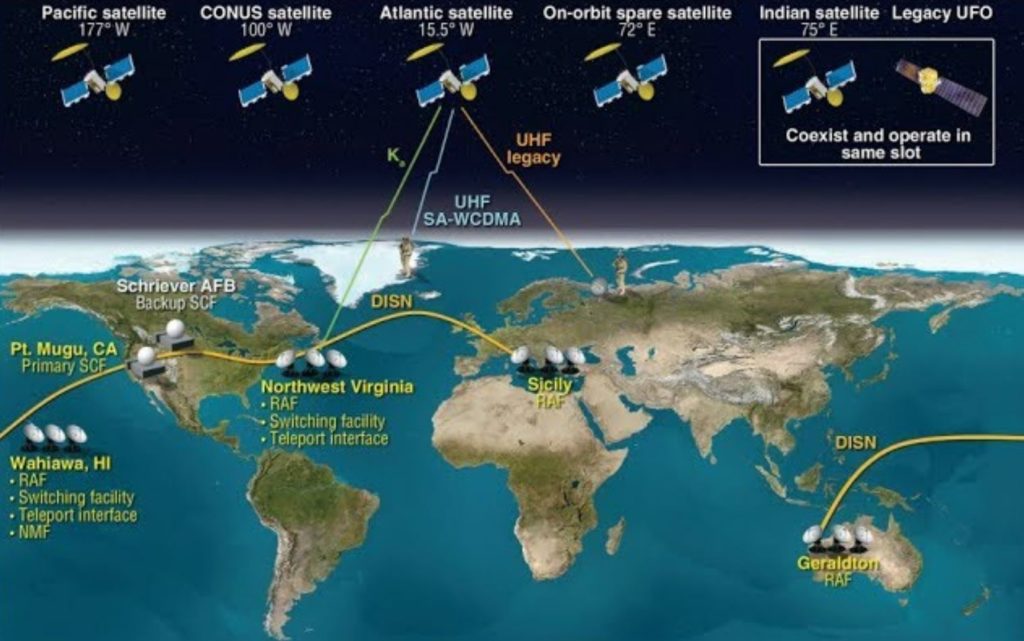 “The M5S (5 Star Movement) divided about the Sicilian maxi-radar”, headlined the Corriere della Sera, thereby spreading a maxi fake news – not about the directorate of the 5 Star Movement,  which, after having won an electoral consensus with the “No MUOS” in Sicily, is now backing off  – but about the very object of the dispute.

By defining the MUOS station in Niscemi as a “maxi-radar”, they are fooling public opinion into believing that it is an Earth-bound electronic scanning device, and therefore defensive. But on the contrary, the MUOS  (Mobile User Objective System) is a new satellite communications system which extends the offensive capacity of the United States to the whole planet.

The system, developed by Lockheed Martin for the US Navy, is composed of an initial configuration of four satellites (plus one in reserve) in a geo-stationary orbit, and linked to four terrestrial stations – two in the United States (Hawaï and Virginia), one in Sicily and one in Australia. The four stations are linked by a network of terrestrial and submarine fibre-optic cables (the station in Niscemi is connected directly to the station in Virginia).

The MUOS, which is already in function, will become fully operational in the summer of 2019, attaining a capacity 16 times superior to that of the preceding systems. It will simultaneously transmit ultra-high frequency coded messages of vocal, video and data material. So submarines and warships, fighter-bombers and drones, military vehicles and on-the-ground units of the US and their allies, will thus be linked to a single command network of control and communications under the orders of the Pentagon, while they are operating anywhere in the world, including the polar regions.

So the MUOS  station in Niscemi is not a “Sicilian maxi-radar” which guards the island, but an essential element of the planetary war machine of the United States.

The same role is being played by the other main US and NATO bases in Italy. The Naval Air Station  Sigonella, a few kilometres from Niscemi, is the base for the launching of military operations  mainly in the Middle East and Africa, carried out by special forces and drones.

The JTAGS (Joint Tactical Ground Station), a US satellite station of the “antimissile shield” deployed at Sigonella – one of the five with global reach (the others are situated in the United States, Saudi Arabia, South Korea and Japan) – serves not only for anti-missile defence, but also for attack operations commanded from advance positions.

The Joint Allied Force Command in Lago Patria (Naples), is under the orders of a US admiral who simultaneously commands the US Naval Forces in Europe (with the Sixth Fleet based at Gaeta in the Lazio) and the US Naval Forces for Africa, whose headquarters are at Naples-Capodichino.

Camp Darby, the largest US arsenal outside of the homeland, supplies the US and allied forces for their wars in the Middle East, Asia and Africa.

The US 173rd Airborne Brigade based in Vicenza, operates in Afghanistan, Iraq, Ukraine and other countries in Eastern Europe.

The bases at Aviano and Ghedi – sites of the deployment of US and Italian fighters under US command, and equipped with B61 nuclear bombs, which, as from 2020 will be replaced by B61-12’s – are an integral part of the Pentagon’s nuclear strategy.

Incidentally, do Luigi Di Maio and the other leaders of M5S [1] remember that they took a solemn engagement with the ICAN (International Campaign to Abolish Nuclear Weapons) to ensure that Italy adheres to the UN Treaty, thus liberating Italy from US nuclear weapons?

This article was originally published in Italian on Il Manifesto. It was sourced from Global Research.

Manlio Dinucci is a Research Associate of the Centre for Research on Globalization.

[1] The 5 Stars Movement is, along with the League, a government party, in which Luigi Di Maio is Vice-President of the Council of Ministers.
The original source of this article is Global Research
Copyright © Manlio Dinucci, Global Research, 2018
Please take a moment to support Ole on Patreon!

Previous Ole’s Daylight Video: Get Chipped by Biohax
Next Sweden Is On The Verge Of Going Completely Cashless: What Could Possibly Go Wrong?