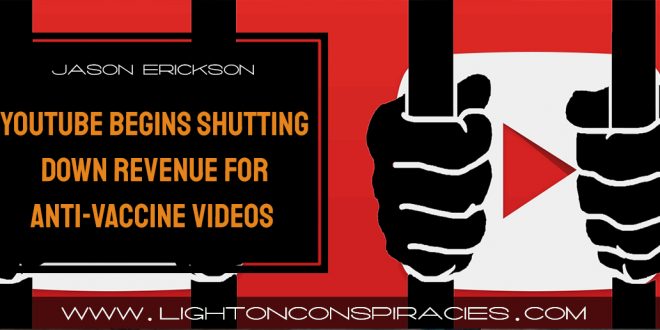 As I recently reported, Facebook announced that it would begin exploring ways to fight anti-vaccine messaging after receiving a letter from Adam Schiff (D-CA).

Schiff and others of his ilk are doing their best to blame the measles outbreak in the U.S. on social media systems that offer anti-vaccine messaging in their “recommended reading and groups” areas.

In the above report about the letter that Schiff sent off to the heads of Facebook and Google, YouTube (owned by Google) was specifically mentioned as being illustrative of “the problem.”

The first result under a search for “vaccines” on YouTube is a video showing a “middle ground” debate between supporters of vaccines and those who think they’re dangerous. The fourth result is first episode of a popular anti-vaccine documentary series called “The Truth About Vaccines.” It has almost 1.2 million views.

This type of level playing field of people actually seeing the information that concerns them enough to spur debate simply can’t stand.

BuzzFeed is reporting that YouTube will take a two-pronged approach to reducing the exposure of this type of messaging – first demonitizing the videos, plus adding a stern warning from the World Health Organization on the videos:

YouTube on Friday said it would prevent channels that promote anti-vax content from running advertising, saying explicitly that such videos fall under its policy prohibiting the monetization of videos with “dangerous and harmful” content. The move comes after advertisers on YouTube pulled their ads from these videos, following inquiries from BuzzFeed News.

In addition to demonetizing anti-vax content, YouTube also introduced a new information panel pertaining to vaccines. Previously, information panels appeared on anti-vax videos that explicitly mentioned the measles, mumps, rubella (MMR) vaccine, and only described what the MMR vaccine is for and linked to its Wikipedia page. Now, a considerably larger number of anti-vax videos have an information panel that links to the Wikipedia page for “vaccine hesitancy”, where it is described as “one of the top ten global health threats of 2019” according the World Health Organization.

This decision comes on the heels of YouTube being exposed for continuing to carry videos that show child exploitation. While the anti-vaccine videos haven’t been completely removed — keeping them just short of child exploitation in the level of seriousness we can assume — this is a disturbing trend.

As we will continue to say, YouTube/Google is technically a private company, so they are entitled to create the policies that they feel are best for their business. However, as many have argued, the connections between these “private” companies and the government are more than tangential — it’s often a direct pipeline. Even ignoring that, here is what Google alone is in control of across the tech/media landscape:

It’s a tad comprehensive, and “Technology Incubator for geopolitical challenges” does nothing to alleviate concerns about government collusion. Also of note is something that specifically pertains to this website: Google AdSense. Can websites like ours that have AdSense expect to have anything that challenges the official vaccine narrative demonitized? This is one of the backdoor ways that censorship can expand — they will say that aren’t censoring the information, because it’s still there (although our partner site Activist Post did have their channel shut down completely for no reason). But the ability to deliver the information is severely restricted by the algorithm, as well as any financial reward for providing the service of information delivery.

This should be a stark reminder that we are entering an age of direct support for what we want to read, see, and hear. Please get on the mailing list of any site that you feel is worth your time and intellectual pursuits, and click on their articles directly as well as send them financial support if you feel they deserve it.

Jason Erickson writes for NaturalBlaze.com. This article (YouTube Begins Shutting Down Revenue For Anti-Vaccine Videos) may be republished in part or in full with author attribution and source link.