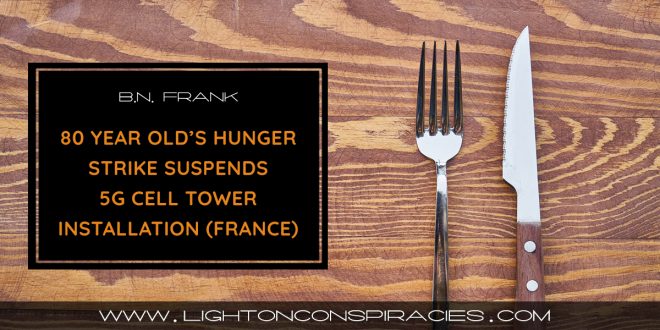 5G opponents in France include citizens as well as legislators (see 1, 2, 3, 4, 5, 6).  They have received extensive media coverage as well.

Despite some victories, 5G deployment has continued and significantly expanded.  Fortunately, one citizen’s activism has at least suspended installation in his community.

80 year old Eugène Riguidel has been on hunger strike since  April 12 protesting a 36 meter high 5G antenna in the town of Landaul west of Auray in Morbihan. On April 20, 2021 Orange is suspending the project to set up its 5G antenna in Landaul (Morbihan) against which it was fighting. The Telecom company Orange announced that it was suspending the work “and decided to reopen the file by re-studying some of the sites initially proposed.”

When he started his hunger strike he stated, “I started my hunger strike and I will undoubtedly put my health in danger, but my coffin will have to be painted orange. I am not against the 5G antenna of Landaul, I am against all these antennas. The government has put in place laws (article 62 of the Élan law on the deployment of 5G) to suppress participatory democracy. Today, the mayor no longer has any right to oppose the projects ”. Nearly 300 people supported the hunger strike started by Eugène Riguidel.

In addition to France, over 100 people have been part of a Hunger strike in Italy to stop the Parliament from loosening their cell tower radiation limits. The initiative is promoted by the Italian Stop 5G Alliance and they also have a petition signed by over 62,000 people.  Learn more about the hunger strike in Italy here.