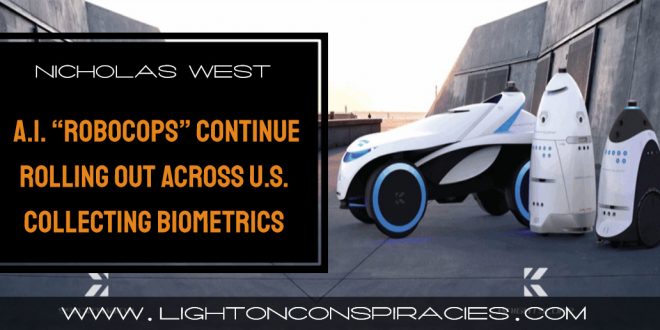 The move toward using robots in law enforcement, private security, and even to scare away the homeless, has been a decade-long trend that is now becoming much more prevalent in everyday life.

“RoboCops” have now been launched coast to coast in 16 states. Last year, it was security robots deployed in New York City.  As Aaron Kesel reported:

The robots are able to scan anyone walking on the sidewalks, record license plates, use infrared vision, and one of the scariest uses of this technology is the capability to detect cellphone serial numbers within a designated patrolling area.

Huntington Park, CA now has its own version that’s been added to the police force, the “HP RoboCop.” MassPrivateI sent out an alert a couple months ago that this particular model would be rolled out. At the time, we received the usual promotional statement from police advertising the many benefits that citizens would receive.  This inspired Muckrock to file a records request from the HPPD to see what details might have been omitted from the original reporting. Last week, Muckrock received a cache of documents that they are now releasing to the public.

Muckrock highlights the added surveillance of the citizenry that they have the pleasure of funding with their own tax money to the tune of $8,000 per month, per robot, to operate. Once again the technology is being supplied by Knightscope, a leader in the field for supplying both governments and private security:

Interestingly enough, the HPPD goes further, and makes the claim that the K5 is a “fully autonomous security data machine” that can actually “differentiate between a harmless passer-by and potential criminal.”

Here are some other bullet points that show the widespread applications for the new security robots:

Muckrock notes that the program is up for review after one year, which is about the only encouraging detail that is offered in their extensive report.

The level of data collection, analytics and reporting smacks of yet more pre-crime efforts driven by artificial intelligence algorithms. As I’ve been reporting, these programs are coming under much greater scrutiny after other police departments have recorded failures across all three aforementioned parameters.  The threat to privacy and overall liberty has become so grave that even the top university A.I. experts in the world have issued a joint statement to warn of “Technical Flaws” In Pre-Crime Police Systems. Other experts have said that A.I. police systems are “no better than a crystal ball” in predicting crime.

Now would be the time for residents of Huntington Park to get informed and begin asking serious questions about this new program during this one-year review period before more of their money is wasted on the pseudo-science of predictive policing.