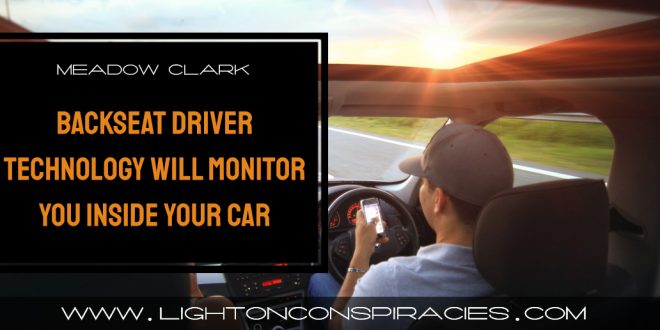 A.I. Take the Wheel: Backseat Driver Technology Will Monitor You INSIDE Your Car 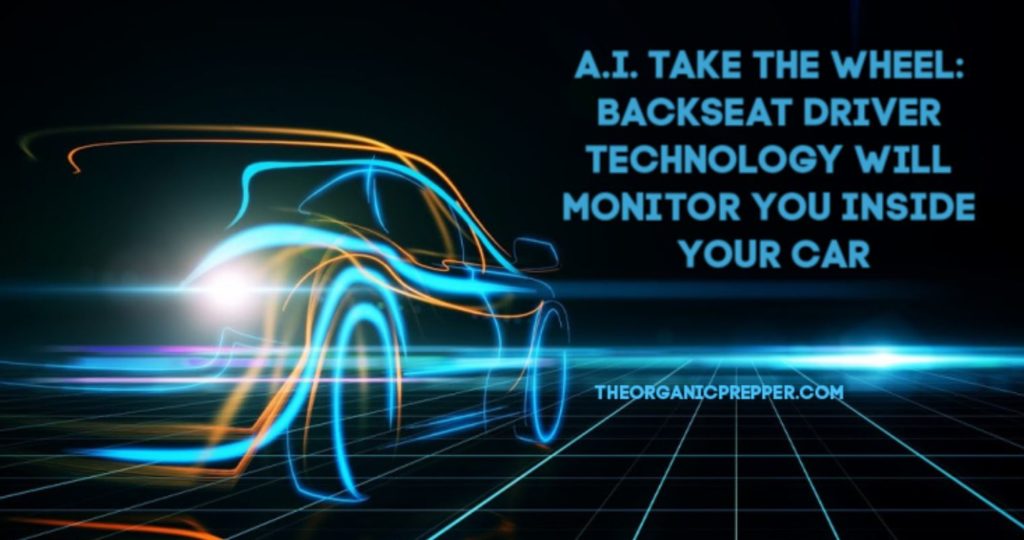 “As vehicles get smarter, your car will be keeping eyes on you,” a recent Reuters report threatened. New backseat driver tech aims to monitor you inside your car.

Gary Numan once sang in the song “Cars,” which sounded futuristic in its time:

However, the age of cars being a symbol of freedom, autonomy, and self-responsibility appears to be over.

Your car could actually report you to the police.

The cars of the near-future don’t feel like the safe, private space about which Numan sang. And the responsibility is moving away from the driver over to A.I. in a sort of Wall-E type society. Cars are becoming more like moving living rooms at the cost of personal freedom.

That is to say that self-driving, smart cars are here to stay and will monitor you and possibly report on you as they record you in your vehicle.

Today we are talking about interior-facing, driver monitoring tech which the media endearingly calls “a backseat driver.” But the technology actually has more control than a nagging passenger merely trying to direct your driving.

In January, the international consumer electronics show (CES) in Las Vegas, Nevada showcased many A.I. and car tech companies and their many ways of analyzing the driver.

In-car sensor technology is now capable of composing images on the driver, capturing motion, monitoring facial expressions in order to detect features about the driver and monitor whether they are too distracted, too sleepy, etc.

This creepy description from the report can hardly hide the intrusive tentacles of the tech:

Whether by generating alerts about drowsiness, unfastened seat belts or wallets left in the backseat, the emerging technology aims not only to cut back on distracted driving and other undesirable behavior, but eventually help automakers and ride-hailing companies make money from data generated inside the vehicle. (Source)

But what is “other undesirable behavior”? Is it teen romance? Smoking? Dropping a McDonald’s french fry in the back seat? The report never specifies.

In-car sensor technology is deemed critical to the full deployment of self-driving cars, which analysts say is still likely years away in the United States. Right now, self-driving cars are still mainly at the testing stage.

The more sophisticated in-car monitoring also could respond to concerns that technology that automates some – but not all – driving tasks could lead motorists to stop paying attention and not be ready to retake control should the situation demand it. (Source)

Interior-facing cameras inside the car are still a novelty, currently found only in the 2018 Cadillac CT6. Audi and Tesla Inc have developed systems but they are not currently activated. Mazda <7261.T>, Subaru <9778.T> and electric vehicle start-up Byton are introducing cars for 2019 whose cameras measure driver inattention. Startup Nauto’s camera and AI-based tech is used by commercial fleets.

Here’s the scary part… and what we can do to stop intrusive A.I.

The scary thing is, the corporations are not motivated by money, here. This is part of acclimating people to an Agenda 21/Agenda 2030 control grid. No one was actually asking for this technology.

You may recall that automakers were subsidized to create self-driving cars by none other than DARPA.

Notably, some A.I. companies reveal that the tech is meant for automakers (not consumers), and what regulators want as well.

It is not yet clear how consumers in the age of Facebook Inc and virtual assistants like Amazon.com Inc’s Alexa will react to the potentially disconcerting idea of being watched – then warned – inside a vehicle, especially as cars become living rooms with the advent of self-driving.

“There’s no doubt this is a hot area,” said Modar Alaoui, founder and CEO of Eyeris, in a recent interview. His company combines five 2D cameras with AI technology for “in-vehicle scene understanding,” including car occupants’ height, weight, gender and posture.

Alaoui believes once automakers see the benefits of a camera tracking the driver, they will opt for more.

Automakers are paying attention for multiple reasons. As Guardian Optical CEO Gil Dotan said, “What automakers want is what either sells cars, or what regulators tell them to do.”

“The reason (the camera) is going to sweep across the cabin is not because of distraction … but because of all the side benefits,” said Mike Ramsey, Gartner’s automotive research director. “I promise you that companies that are trying to monetize data from the connected car are investigating ways to use eye-tracking technology.” (Source)

Notice the big push to get consumers to accept interior-facing cameras and facial recognition whether they want to or not? Even though it means that their data will be monetized for better ad placement to them, with no visible benefits to the driver. Ramsey goes on to say that advertisers could find out how many commuters look at their billboards thanks to eye-tracking tech which could be sold.

If it’s so great, why does there need to be a big push? It’s because it’s so intrusive. Why do automakers need to see “the benefits of a camera tracking the driver” and why do drivers need to be tracked, especially their weight, gender and height? Every ride sounds like a doctor’s visit!

But who can afford this back-seat driver tech? Some of it has been quietly subsidized and perhaps many people will lose the ability to travel if they don’t join in the smart grid.

All we can do is continue to push back and refrain from joining in. Every time you go to buy a car, make sure you express your disgust at surveillance and facial tracking and keep the old-time cars as long as possible. A.I. companies assure that consumers will still be able to opt-out but that’s what we were all told about smartphone privacy options. Now, it’s common knowledge that phones are constantly listening.

Jeepers, creepers – A.I. is more than just a staring contest

Americans are now comfortable with the idea of being watched and recorded. They’ve forgotten about the penetrating gaze of cameras, much like a laboratory animal is oblivious about the researcher studying it behind the two-way glass.

But back-seat driver technology is not just another staring contest…

Indeed, this is more about A.I. learning and anticipating YOUR human behavior. And if what I’ve just said reminded you of Stanley Kubrick’s 2001: Space Odyssey, then you are now starting to think about the potential dangers of futurist tech.

“The more you know about the user, the more you’re able to fulfill his or her needs,” said Eric Montague, senior director of strategy for Nuance Automotive. His company uses tracking tech, voice recognition, and even emotional analysis from a third-party company called Affectiva.

No one asked to have all their needs fulfilled by facial recognition and eye-tracking –  as though it’s a foregone conclusion that the temperature of my butt warmer is more important than privacy.

Indeed, it’s not about your needs, it’s about the needs of the government’s surveillance programs for which they use monopolistic corporations to serve as the proxy for Intel gathering.

And how brilliant it is it that this is all under the guise of new tech products.

In other words, consumers are paying for their own laboratory experiment!

What did you think of this new tech?

Are you concerned about the expansion of A.I. in cars? How do you plan to handle these trends? Let us know in the comments below!

Meadow Clark is a dreamy, ethereal, Midwestern natural explorer who wants to shine the light of knowledge in a sometimes crazy world.

Share
Previous Cabin Talk: Ole and Cody. What is going on!
Next ASU Law School Wants Cities Around the World to Use Facial Recognition