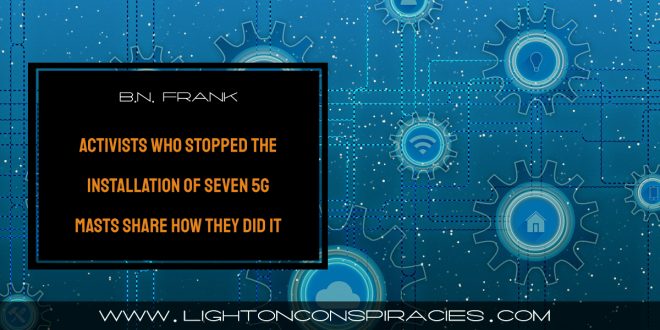 Cities worldwide AND entire countries have taken action to ban, delay, halt, and limit 5G installation AS WELL AS issue moratoriums due to health, safety, environmental and economic risks.  Research has determined it is NOT SAFE.  A petition boycotting 5G phones has been endorsed by doctors, scientists, and industry whistleblowers.

Big thanks to Bristol residents and organization 5G Awareness for sharing their strategy for successfully stopping 5G installation where they live:

Activists describe the techniques they are using to stop the installation of 5G masts in Bristol. They have managed to prevent the erection of 7 masts now over the last few weeks and they now share how they have been doing it.

The majority of scientists worldwide oppose 5G deployment.  Since 2018 there have been reports of people and animals experiencing symptoms and illnesses where it’s been installed (see 1, 2, 3, 4).  Of course other sources of wireless emit harmful radiation too.  Last year the World Health Organization warned that high levels of Electromagnetic exposure could lead to health issues in a significant portion of the population.

High-speed internet is achievable, safer, and more secure with hard-wired internet connections.  Nevertheless, 5G continues to be installed where it hasn’t been banned and also in space.

Share
Previous The Worse Things Get, The More The Stock Market Likes It
Next Clips from “The Hamburg Syndrome” (1979), German pandemic Sci-Fi film