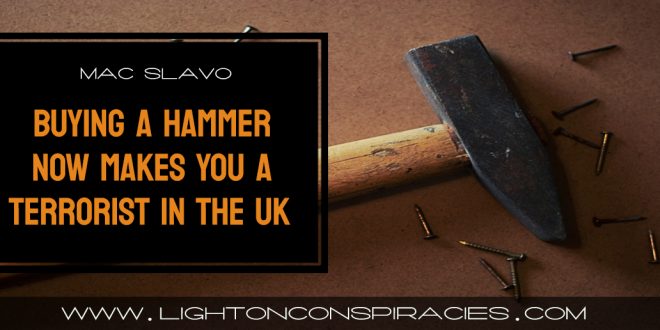 Buying A Hammer Now Makes You A Terrorist In The UK If you need a hammer for any reason, the United Kingdom’s counter-terrorism policing unit will consider you a potential terrorist. They are also asking that anyone who sees someone doing something suspicious, like purchasing a hammer, to report it to the enforcers.

Buying a hammer is suspicious and is potentially an indicator of criminal activity according to the Tweet below posted by the U.K. Counter Terrorism Policing office.

It’s hard to see in the Twitter photo, but the guy looking at the hammer also has a few knives in his shopping basket. That’s apparently supposed to be a context clue that he’s maybe a very bad person, if not a terrorist.

The U.K. has a borderline-comical campaign going on trying to convince young people not to carry knives around. According to Reason, there’s actually a very logical and likely explanation for needing some knives and one hammer. The man might be a chef doing some work in his restaurant, but the point of this ad campaign is that they actually don’t want you to think of the most likely explanation. They want you to be suspicious and live your life in fear of others’ everyday activities. Complete with the scary “Life Has No Rewind Button” motto.

Reason further pointed out that the entire video ad is actually a lot more sinister; not because it’s eerie at all, but it’s a bit horrifying what the UK counter-terrorism police demand you feel is “suspicious” behavior: like taking out the trash.

Similar tweets and the video ad above did get some good and decent mocking (and rightfully so) on Twitter:

They [the counter-terrorism police] try to blow off the idea that people are going to end up reporting innocent activity with the statement “Reporting suspicious activity won’t ruin lives, but it might save them.” Do they really think there’s no consequences to being investigated as a potential terrorist? Law enforcement in the United Kingdom goes after and prosecutes people for the content of their tweets, for heaven’s sake. These investigations would most likely upend the lives of their subjects. This ad isn’t just mockable, it’s horrifying. For the love of God, do not go through life being suspicious of common daily occurrences. And be very wary of a law enforcement organization that tells you to treat people who record the behavior of law enforcement as potential threats. -Reason

The worst part is that some people are constantly in fear of what others are doing.  They pay far more attention to the daily goings on of others than they do to themselves. If someone actually does report another, it amounts to little more than a slave tattling on their fellow slave to the “Punisher.” The good news is that if the ruling class and their hired enforcers are this terrified of the everyday lives of the public, it really won’t take much for the entire empire to come crashing down under its own weight.

Share
Previous Are You A ‘Truth Seeker’ That’s Upset With ‘Asleep’ People? Read This.
Next Apocalyptic Debt Crisis In America: 63 Of America’s Largest 75 Cities Are COMPLETELY BROKE