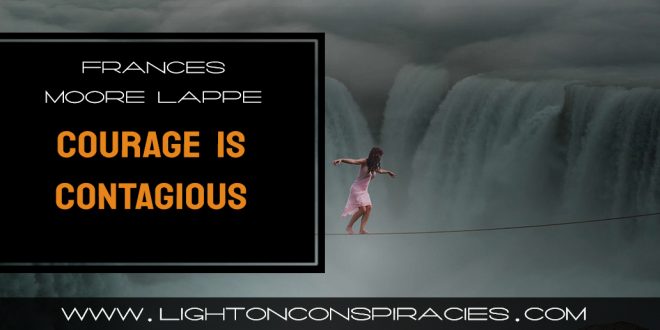 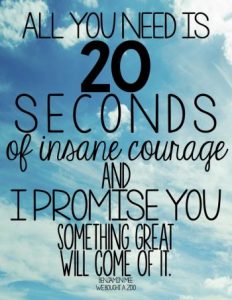 Civil courage is the capacity to do what serves the common good, even if one must stand alone.

No matter how many times we hear of one person’s act of conscience igniting sparks that light up the sky, too many of us hold tight to the notion that our own acts don’t mean much. Aren’t we the proverbial drops in the bucket, nice but never spectacular?

Or, as it dawned on my daughter Anna and me while writing Hope’s Edge for many of us it’s even worse. We feel more like drops in the Sahara, evaporating before we even hit the sand.

One reason for blindness to our own power could be that we can’t see the bucket that our “action drops” are filling up — that is, the big, system-changes our individual choices help to inch forward. I do know that every time in my life that I have been able to catch even a glimpse of such a bucket, my life has changed.

Recently it happened as I marched more than a hundred miles with Democracy Spring in 2016 to sit on the Capitol steps, demanding money out of politics. Knowing that I was part of the rising Democracy Movement, I could feel my “drops” splashing into a powerful bucket.

But a metaphor of “filling up” from the top down still misses a lot, for in our world where “there are no parts, only participants” (the lovely phrase of my departed friend, physicist Hans Peter Duerr) our energies radiate horizontally.

It happens because in our interconnected world, almost always someone is noticing. Even if it’s one person.

On that note, I love a story author Rebecca Solnit tells about a rainy day in the early 1960s when a handful of Women Strike for Peace members protested above-ground nuclear testing in front of the Kennedy White House. They reported feeling “foolish and futile,” she writes.

Then, years later one of the protesters learned that Dr. Benjamin Spock had driven by that day and thought to himself, if these women “are so passionately committed, he should give the issue more consideration himself.”

The world famous “baby doctor” then became one of the most ardent and effective national leaders opposing above-ground nuclear testing, and by 1963, President Kennedy had signed a test ban treaty.

Some years ago, after speaking at a university in Leipzig, Germany, students led me on a quick tour of their beautiful city. Soon one young guide pointed to the church of St. Nicolai. “That’s where it began,” she told me. That church played a key role in bringing down the Berlin Wall.

I had never heard that Leipzig, much less this church, had been part of the fall of the Wall, on November 9, 1989, leading to the collapse of the Soviet Union and changing the world forever.

Oh, yes, she went on, this is where people began to gather — by early October, some 70,000. In other German cities, similar protests took off. 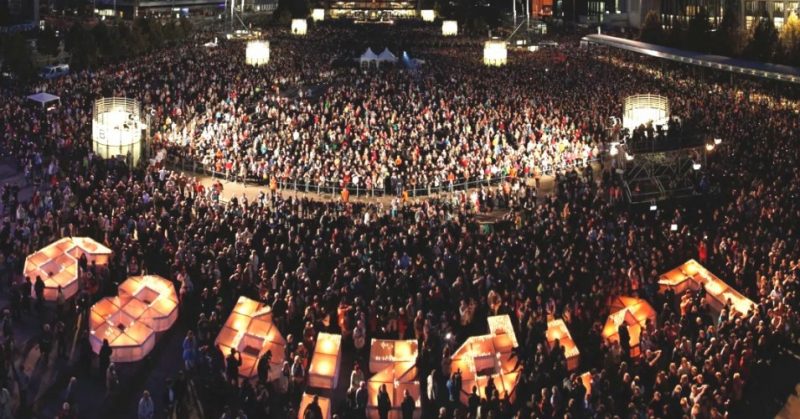 A crowd gathers in Leipzig, Germany to commemorate the 70,000 people who courageously joined together in 1989 to peacefully demand freedom and democracy, a catalyst for the fall of the Berlin Wall.

Later, I read a real-time account by 14-year old Markus Laegel, telling of his and his parents’ experience in that moment:

“Thousands of people gather. They’re here to pray. They’re praying for peace. The prayer is set to start at 6 p.m. The idea is to use the Nicolai church, but that’s already full and it’s still only four o’clock. We go down to the church of St. Thomas. That’s full too, but we manage to find a space.

“Mum, Dad and me. We’re a family. Not just us, but everyone. Everyone in every church at that moment.”

Markus then quotes a minister’s words to describe what is unfolding:

“When you hold a candle you need both hands. You have to guard the flame… You can’t hold a stone or a club at the same time… The army patrols and police were drawn in, started conversations and retreated.”

“Thousands of people… lay their candles at the feet of the armed soldiers and police. The steps of the Stasi [state security] building — the organization that spied on, abused and sold people out — are now awash with candles. It looks like a river of peace and light.”

“We had planned everything. We were prepared for any eventuality. Any except for candles and prayers.”

I share Markus’s story because we each need to believe that the potential for courage — civil courage — is in each of us; and that our individual sparks may ignite conflagrations. Without acting, we will never know, and even if we act, we probably never know how we’ve changed history.

One thing, however, is certain. Civil courage is the capacity to do what serves the common good, even if one must stand alone: for, while ultimately tens of thousands did join in these extraordinary actions, they depended on the courage of the first few willing to step up, to be different.

Please note: This article first appeared on CommonDreams.org and is reproduced here under a Creative Commons Attribution-Share Alike 3.0 License.