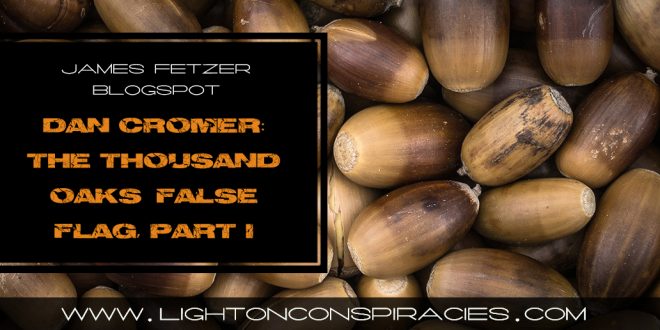 
“It doesn’t feel real”, said Taylor Whittler while describing the scene to television cameras, who was present at the mass shooting in Thousand Oaks, California, at the Borderline Bar and Grill. It doesn’t feel real–that is likely the only honest reporting from the fake news media about what feels and looks more like a mass shooting drill.
As is often the case with staged shooting events, the City of Thousand Oaks had conducted a Community Emergency Response Team (CERT) training exercise and even placed an advertisement for “disaster drill victims” just four days before on 3 November 2018.

What Are the Odds?

What they say they know is thirteen people were killed, including a police officer and the shooter, who died of a self-inflicted gunshot wound with an additional twenty-four people who were injured. Miraculously, they say a group of Las Vegas shooting survivors were inside the bar making them perhaps the unluckiest people of all time in American history.
As Asher Robertson has roughly calculated, 325 million (U.S population) divided by 58 (Las Vegas victims) results to about 1 in 5.6 million odds. 325 million (U.S. population) divided by 13 (Thousand Oaks victims) is 1 in 25 million. The odds of being killed in two mass shootings then would be 1 in 140 million. So, the odds for a group of people at the same two mass shootings—nearly impossible.Yet we are supposed to believe it happened in Thousand Oaks.

Ventura County Sheriff, Geoff Dean, said, “It is a horrific scene in there. There is blood everywhere.” Later he described the scene as “hell”. Oddly however, the video reportedly filmed inside the Borderline during the shooting shows no blood nor anything resembling hell despite the graphic video warning. It reveals little more than an empty bar with no evidence that anyone was wounded or killed.

To preview the book click on the thumbnail below:
Vol 1 Paperback Vol 2 Paperback
Buy The eBook here
In fact, not a single legitimate image of a person suffering in pain, in shock, bleeding or wounded can be found from all media coverage. Again, it almost always seems with these events that mysteriously, there is no actual graphic video footage even though most people especially students have a cell phone camera.

This event is notable for providing an abundance of bad crisis acting–as in Pulse nightclub, Orlando bad. The very worst performance must go to Susan Schmidt-Orfanos, the mother of Telemachus Orfanos, who allegedly survived the mass shooting in Las Vegas but not this one in his hometown.

“My son was in Las Vegas with a lot of his friends and he came home,” she said. “He didn’t come home last night and I don’t want prayers, I don’t want thoughts, I want gun control,” Schmidt-Orfanos said. “And I hope to God nobody else sends me any more prayers. I want gun control. No more guns!”
Apparently, the fake news media suspects the public will believe that a grieving mother would emphatically lobby for gun control for television cameras only hours after her son was murdered.
She also shares many of the same mannerisms and physical features to the crisis actor that played the role of the anti-Trump screaming woman at the inauguration and the mother of a Pulse nightclub victim.  This is noteworthy because there has been a pattern of crisis actors playing multiple roles at multiple staged events.

“Oh god, this is so hard”, Jason Coffman, father of shooting victim, Cody, said while sobbing but strangely without tears for television cameras. His grieving father performance with its forced emotion, over-the-top behavior and brand-new Hollywood hip hop wardrobe is so hard to watch and believe. This is also noteworthy because just like movie and television actors, often, it appears that they too have been ushered through makeup and wardrobe before appearing on camera.

He also appears to have played roles at previous staged events. He shares a striking resemblance to a 9/11 firefighter and Sandy Hook parent. Perhaps, it’s all this bad acting, that gives one the impression that it doesn’t feel real.

The term duping delight was coined to explain possible reasons for an increase in certain cues while the act of lying takes place. Signals of duping delight can include increases in smiling and nodding and higher voice pitch, faster and louder speech. Also, these signals will increase if the duper feels their lie is perceived as being true. There is nothing like a television crew to aid in this perception for the duper.
This event, just as many more before it, offers numerous examples of the duping delight. Maybe, this too is why it doesn’t feel real.

Perhaps, the most peculiar trend that has given rise during the last year with staged shooting events is that of the shirtless hero character. This role is played by strong, military men, who are literally not wearing a shirt and subsequently applauded by the fake news media for their unbelievably heroic acts.  This is the shirtless hero.
The Las Vegas and Thousand Oaks events prominently featured this bizarre persona during the aftermath.  Despite the virtually impossible odds, Brendan Kelly claims to have been a shirtless hero at both shootings.
Kelly, who has a large tattoo on his left arm memorializing the Las Vegas shooting said he dragged one woman out a back emergency exit at the Borderline and then, using his belt, T-shirt and Marine training, applied a tourniquet to his friend’s bleeding arm.
When the Las Vegas gunman allegedly opened fire from a 32nd-floor hotel room, Kelly, armed with a knife, said he threw a friend to the ground before helping get her out of the area and into a room where he hunkered down and attended to other victims for four hours.
These official accounts of shirtless heroes are at best very unusual. Apparently, we are to believe that Emergency Response Teams hand out surgical gloves to shirtless dudes in the cold night while endorsing their participation at these horrific events. It could be that this is why it doesn’t feel real.

The fake news media say they know that police identified the perpetrator as 28-year-old Ian David Long, a United States Marine Corps veteran suffering from severe post-traumatic stress disorder (PTSD). And again, as with previous staged shootings, the mental health issue is being proclaimed as a possible motive in place of an actual motive. Interestingly, according to the military, there is no record of Long ever reaching out for help with PTSD.
Additionally, the absurd claim that the shooter carefully posted to social media during the event is being trotted out again. It has been reported that he posted to Instagram during the shooting and just before taking his own life with a self-inflicted gunshot.
“Yeah… I’m insane, but the only thing you people do after these shootings is ‘hopes and prayers’…or ‘keep you in my thoughts’”, he posted. Yeah, this doesn’t feel real either.

What We Really Know

The Thousand Oaks shooting is now the most obvious example of a fake shooting to date with its all-too-familiar playbook, over-the-top production values and bad actors. So, add this one to ever-increasing list of state-sponsored, it-doesn’t-feel-real events that has been unleashed on the American people since the 2012 Obama-era nullification of The Smith-Mundt Act of 1948, which prohibited the government from propagandizing its own public.

Dan Cromer, an IT expert, was the first to discern that the audio from the Las Vegas concert was too high quality and had been prerecorded with sound effects of machine guns and military weapons, which were being complemented by special visual effects and an audience seeded with crisis actors. His research is based upon pubic records and background knowledge. In addition to his brilliant work on Las Vegas and Parkland (published in this volume), Dan has been the featured guest on “The Raw Deal” (Revolution Radio) with host Jim Fetzer on 28 June 2018 and on “The Power Hour” (GCN) with guest host Jim Fetzer on 12 October 2018 discussing his discoveries about both. Dan and Mona Alex Presley are striking examples of ordinary citizens who have become (unaccredited) investigative journalists and made important contributions to exposing the “fake news” of the mainstream media, including The New York Times, The Washington Postand other elements of the CIA and Zionist controlled news venues, which dominate (by volume) news reporting but where (on politically-significant issues) their reports are characteristically biased and misleading, qualifying as no more than propaganda and disinformation.