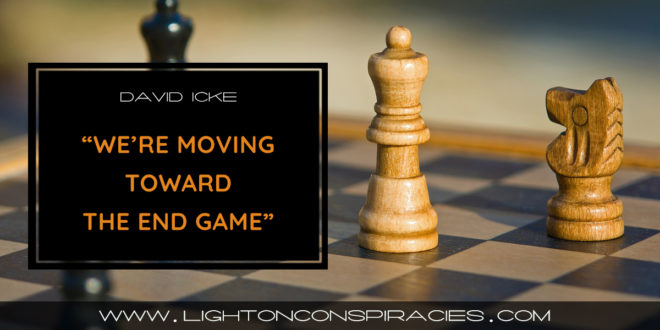 This, the second half of my two-hour interview with David Icke, moves beyond “who really did 9/11” to look at the Death Cult’s long-term game plan…and the metaphysical and spiritual issues in play. (Listen to Part 1, “Who Really Did 9/11 and Why”)

David Icke seems unperturbed by the tidal wave of censorship washing over the internet, and over him personally: “We’re moving toward the end game. And as we do, some things are going to become more and more blatant—and left to the free flow of information would be widely exposed.”

The discussion turns to spiritual matters: If the Death Cult is essentially satanic, then who or what opposes it?

Icke: “My philosophy is that we are…consciousness. We are points of attention within an infinite stream of consciousness. And that point of attention can be the size of a pea, or it can be massively expanded, depending on how much of that consciousness we want to allow in. So we’re different points of attention within the same stream of consciousness. The labels that we give ourselves, whether it’s race, culture, or whatever, are not who we are, but what we’re experiencing, what our consciousness is experiencing, in the Biblical three score years and ten. Therefore to me, to judge people by  their race or culture or religion is ridiculous. To judge yourself, to self-identify, with labels, is to me ridiculous. Because the label are merely experiences. People can accept that or argue against it, but it’s my philosophy. And when you look at it, it’s the ultimate non-racist philosophy. Because I’m saying, ‘it’s just an experience, chill out.’”

David Icke’s philosophy strikes me as congruent with the teachings of prophets, mystics, and wisdom teachers from many traditions, including the Islamic tradition I’m most familiar with. The Sufi masters urge us not to identify with our ego and its baggage of labels and tribal affiliations, but instead to surrender to the reality that we experience at each moment. So instead of calling himself Ibn Fulan (the son of so and so) the Sufi is Ibn Waqtih (the son of his moment). The experience of each moment is from God. And in fact it is ultimately God experiencing everything Real; everything but God is veil and illusion, since God is al-Haqq, or Reality with a capital R.  By letting go of ego, labels, and other illusions, consciousness can expand massively beyond its ordinary “size of a pea” as David  puts it and achieve something a bit closer to the proverbial “God’s-eye view.”

Another Sufi-Islamic aspect of David Icke is the way he has been reviled, slandered, and harshly rejected by legions of small-minded people. This is precisely what all of the prophets have experienced, according to the Qur’an. So David Icke is walking in the footsteps of the prophets, whether he knows it or not. Consciously or unconsciously, he is emulating the very best possible role models. His willingness to persist in telling his unconventional truths-as-he-sees-them recalls not only the great prophetic voices, but also the Malamatiya Sufis, the “people of blame,” who made a point—some say a fetish—of outraging orthodox opinion in order to invite reprobation and insults. By living this way, they sought to demonstrate that they didn’t care what anyone (except God) thought about them.

David Icke seems fully aware of the Death Cult’s plan to destroy the al-Aqsa Mosque, the world’s leading symbol of Islamic spirituality, and put a false messiah (possibly a supercomputer) on the throne to rule the world from a blood sacrifice temple in Occupied Jerusalem. In other words, he sees the coming false messiah, the Antichrist or Dajjal. But what about the one true Messiah, Jesus, and his friend and ally the Mahdi? Is there an eschatological scenario emerging via Icke’s exposure of the Death Cult?

Tune in, listen, and let David Icke expand your horizons.