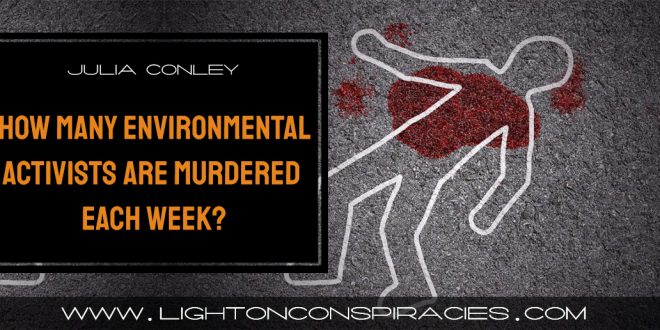 Organizers campaigning against the destruction of the environment face governments, contract killers, and private security firms trying to stop them—sometimes working together. In total, 164 people were murdered last year while fighting such forces as the mining, logging, and agribusiness industries from taking over swathes of ancestral lands, communities, and natural habitats.

The number recorded by Global Witness in its report, “Enemies of the State,” means an average about three eco-defenders were killed per week—but the group notes that because so many of these deaths go unreported, its study represents a “sizable underestimate.”

“These are ordinary people trying to protect their homes and livelihoods, and standing up for the health of our planet,” Global Witness reported. “Often their land is violently grabbed to produce goods used and consumed across the world every day, from food, to mobile phones, to jewelery.”

BREAKING: More than 3 Land & #EnvironmentDefenders died every week in 2018 and many more were attacked and arrested. Calls to save the planet are growing louder – but those protecting it are being silenced. Read our report #EnemiesOfTheState: https://t.co/rZkZERlI7L pic.twitter.com/9STzUdtimN

The Philippines was the deadliest country for eco-defenders in 2018, with 30 people killed for protecting land and the environment. Nine victims were killed on the country’s island of Negros when gunmen shot the sugarcane farmers as they occupied a plot of land which was covered by President Rodrigo Duterte’s land reform program but had not been distributed to the poor farmers.

The National Federation of Sugar Workers said at the time that the government has not created an effective land distribution program and instead “red baits those who assert their rights to the land,” linking the farmers to communist guerillas.

The criminalization of eco-defenders is a common tactic used by state forces and corporations to discredit organizers, defend aggressive actions against environmental campaigns, and deter others from joining the fight against extractive and damaging industries, Global Witness reported.

“It is a brutal irony that while judicial systems routinely allow the killers of defenders to walk free, they are also being used to brand the activists themselves as terrorists, spies or dangerous criminals,” said Alice Harrison, senior campaigner for Global Witness. “Both tactics send a clear message to other activists: the stakes for defending their rights are punishingly high for them, their families and their communities.”

Big business and governments are trying to intimidate the people who protect our planet with legal threats. We stand with them. Add your voice: https://t.co/wmKhuMBq0d pic.twitter.com/v3x9iLPCcT

Victoria Tauli-Corpuz, a Filipina and the United Nations Special Rapporteur on the rights of indigenous peoples, told Global Witness about her own recent experience being labeled as a criminal by her country’s government.

“In March 2018, the Philippines government declared me a terrorist,” Tauli-Corpuz said. “This was in retaliation for me speaking out against indigenous rights violations in my home country. For months, I lived under threat, and could not safely return home. Although I have since been removed from the list, government officials continue to hurl false accusations at me.”

“This is a phenomenon seen around the world: land and environmental defenders are declared terrorists, locked up or hit with paralyzing legal attacks, for defending their rights, or simply for living on lands that are coveted by others,” she added.

In December, two brothers were found shot to death amid their work with their community to fight a hydropower project linked to one of the country’s wealthiest and most powerful families and funded by international banks. The Peaceful Resistance of Ixquisis movement has led the fight, saying the two planned dams are polluting water sources, destroying crops, and killing fish populations.

At least one other man was killed last year for resisting the project, while many others have been injured and arrested.

“They say we are terrorists, delinquents, assassins and that we have armed groups here, but really they’re just killing us,” Joel Raymundo, a member of the movement, told Global Witness.

The country saw the largest spike in murders of eco-defenders in 2018, with 16 people—five times more than the previous year—killed for campaigning against the hydropower project, land grabs and forced evictions, mines, and plantations. The death toll makes Guatemala the deadliest country per capita for eco-defenders last year.

Resistance against mining projects was linked to the most deaths worldwide last year, with 43 environmental campaigners killed.

Julian Carrillo was found shot dead in northern Mexico in October—the sixth member of his family to be killed in recent years amid their community’s fight against mining projects.

In February 2018, a 16-year-old eco-defender named Luis Fernando Ayala was reportedly tortured before being killed. He had been a fierce opponent to mining and hydroelectric projects. And in June, three people were killed when police shot live ammunition into a crowd of protesters in The Gambia, where they were demonstrating against sand mining on local rice fields.

“As we hurtle towards climate breakdown,” she added, “it has never been more important to stand with those who are trying to defend their land and our planet against the reckless destruction being meted out by the rich and powerful.”

Share
Previous Sunscreen is Damaging Coral Reefs – Everything You Should Know About It
Next The Information War is Over and We Have Lost. Change My Mind.