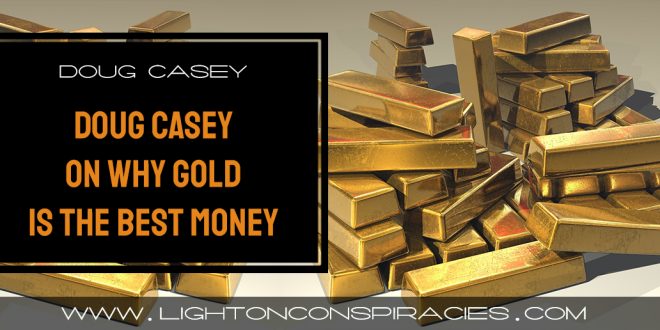 Doug Casey on Why Gold Is the Best Money

Hopefully, you’ve added some to your portfolio… before this boom really takes off. We see big things coming… and that’s why today, we’re sharing one of the most important essays on gold we’ve ever published.

It comes from our founder, Doug Casey, who explains the key reasons why gold is the best money. As Doug says, you’ll want to burn them into your memory…

It’s an unfortunate historical anomaly that people think about the paper in their wallets as money. The dollar is, technically, a currency. A currency is a government substitute for money. But gold is money.

By that definition, almost anything could be used as money, but obviously, some things work better than others; it’s hard to exchange things people don’t want, and some things don’t store value well. Over thousands of years, the precious metals have emerged as the best form of money. Gold and silver both, though primarily gold.

There’s nothing magical about gold. It’s just uniquely well-suited among the 92 naturally occurring elements for use as money… in the same way aluminum is good for airplanes or uranium is good for nuclear power.

There are very good reasons for this, and they are not new reasons. Aristotle defined five reasons why gold is money in the 4th century BCE (which may only have been the first time it was put down on paper). Those five reasons are as valid today as they were then.

When I give a speech, I often offer a prize to the audience member who can tell me the five classical reasons gold is the best money. Quickly now – what are they? Can’t recall them? Read on, and this time, burn them into your memory.

If you can’t define a word precisely, clearly and quickly, that’s proof you don’t understand what you’re talking about as well as you might. The proper definition of money is as something that functions as a store of value and a medium of exchange.

Government fiat currencies can, and currently do, function as money. But they are far from ideal. What, then, are the characteristics of a good money? Aristotle listed them in the 4th century BCE. A good money must be all of the following:

Actually, there’s a sixth reason Aristotle should have mentioned, but it wasn’t relevant in his age, because nobody would have thought of it… It can’t be created out of thin air.

Not even the kings and emperors who clipped and diluted coins would have dared imagine that they could get away with trying to use something essentially worthless as money.

These are the reasons why gold is the best money. It’s not a gold bug religion, nor a barbaric superstition. It’s simply common sense. Gold is particularly good for use as money, just as aluminum is particularly good for making aircraft, steel is good for the structures of buildings, uranium is good for fueling nuclear power plants, and paper is good for making books. Not money. If you try to make airplanes out of lead, or money out of paper, you’re in for a crash.

That gold is money is simply the result of the market process, seeking optimum means of storing value and making exchanges.

Chris’ note: As we’ve said before, to take advantage of this gold surge, your first step should be to buy physical gold.

But you shouldn’t stop there. Owning gold stocks in your portfolio is a great way to juice your returns. Even just a small runup in gold can send these stocks soaring… and now’s the time to stake your position.

Our go-to commodities expert, Dave Forest, is one of the best there is at finding the top companies to benefit from this surge. He just closed a gold trade in his International Speculator newsletter that delivered his readers a 219% gain. And one of his current picks is already up 100% in two months.

You can go here to learn more about a subscription to International Speculator… and start profiting from this latest gold rally.

Share
Previous The Pentagon can make you hear voices in your head. And Facebook can read your mind.
Next Drinking Apple Cider Vinegar Before Bedtime Will Change Your Life For Good