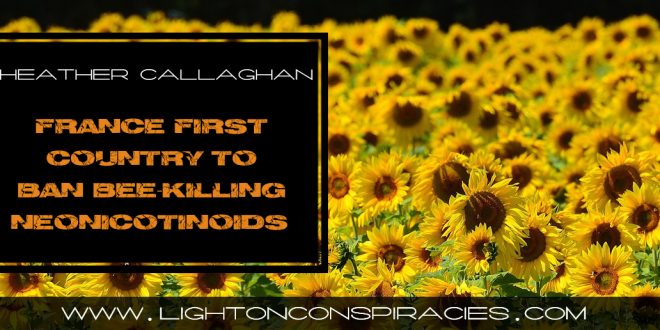 In 2016, France’s National Assembly voted to totally ban the bee-killing pesticides known as neonicotinoids by September 2018. Now, the time has come to make good on that plan, the country announced on Saturday. While farmers are incensed by this move, beekeepers are even angrier. Earlier this summer, Parisian beekeepers staged a bee funeral to really drive the point home about the loss of pollinators.

Recently France and even the EU as a whole have made strides when it comes to pesticides:

The move to ban the five so-called neonicotinoids has been hailed by beekeepers and environmentalists, but cereal and sugar beet farmers warn it could leave them all but defenceless in protecting valuable crops against other harmful insects.

By enforcing the blanket ban, France is going further than the European Union, which voted to outlaw the use of three neonicotinoids – clothianidin, imidacloprid and thiamethoxam – in crop fields starting on December 19.

France has banned these three, along with thiacloprid and acetamiprid, not only outdoors but in greenhouses too.

Initially opposed, Britain now backs the less comprehensive EU ban due to evidence supporting claims the chemicals contribute to “colony collapse disorder”, a mysterious phenomenon that has seen bee populations plummet by up to 90 per cent in some cases. Other potential causes are mites, viruses and fungi.

Introduced in the mid-1990s, synthetic neonicotinoids share the chemical structure of nicotine and attack the central nervous system of insects. Intended to replace older, more harmful pesticides, they are now the most widely used to treat flowering crops, such as fruit trees, beets and vineyards.

But scientific studies have shown that neonicotinoids cut bees’ sperm count and scramble their memory and homing skills. Fresh research out this week even suggests the bees can develop a dangerous addiction to the insecticides, much like smokers for nicotine.

Farmers faced a “dramatic technical dead-end,” said France’s biggest farming union FNSEA, calling for exemptions in sectors “where there are no alternatives or insufficient ones”.

The ban “will exacerbate unfair competition with European and non-European producers” still allowed to use the pesticides, they warned.

A report by France’s ANSES public health agency said in May there were “sufficiently effective, and operational” alternatives to the majority of neonicotinoids used in France.

In 2016, when this plan was first announced, Bayer – now the owner of the former Monsanto – stirred up farmers by dooming their crops if there were to be a ban. However, farmers have a legitimate concern with this ban since there seem to be no replacements at the ready. But in the two years since the announcement, France must have found some “sufficiently effective, and operational” alternatives.

I’ve always advocated for innovative replacements for farmers when it comes to pest management, since this is 2018 and we have many types of ways to grow food and still keep our biodiversity. But I think a lot of the farmers work day and night and invest a lot of money with big chemical/seed companies just hoping for a salvation. Converting farms to more natural methods is an arduous, expensive task – there aren’t many incentive programs for that move.

It is not the farmers’ – nor the consumers’ – faults that this class of pesticides harms pollinators. The regulatory agencies have been accused of relying on tests that come from company researchers instead of truly independent testers. The corporations and regulatory agencies have both created an environmental and human health nightmare that will take years to undo.

Some beekeepers, like one who lost 86% of his hives over the winter, fears that these replacements will be more of the same. And that is a legitimate concern since that may be how we wound up with neonicotinoids in the first place. As a replacement for organophosphates.

France is simply lifting a gavel to protect its interests. Keep in mind, that some of those interests are probably sustainability programs that fall in line with Agenda 21.

Still, it’s a step in the right direction and paves the way to for other nations to follow.

France is following Canada who announced a neonicotinoid ban this year. Meanwhile, the U.S. moves backwards by removing a ban on pesticides and GMOs used in wildlife refuges.

Heather Callaghan is a Health Mentor, writer, speaker and energy medicine practitioner. She is the Editor and co-founder of NaturalBlaze as well as a certified Self-Referencing IITM Practitioner.

This article (France First Country to Ban Bee-Killing Neonicotinoids in Europe) was originally published at Natural Blaze and is reposted here with permission.

Previous How the Trade War Helps Hide Central Bank Sabotage Of The Economy
Next CMC. The Italian undercover CIA and Mossad station and the assassination of JFK