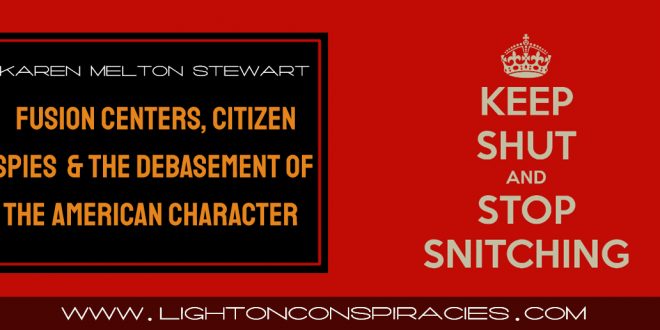 Fusion Centers, Citizen Spies and the Debasement of the American Character No matter if you are in the “Trump-resistance” or a QAnon Patriot, it is likely significant numbers of you have been successfully debased by your state Fusion Centers, despite political leanings. Only raw avarice and a total disregard for the Constitution is needed.

For those who do not know what a Fusion Center is, it was decided after 9/11 that the Federal, State, and local authorities were failing to sufficiently communicate with each other in regard to terror threats, so Fusion Centers were created in each state to “fuse” information and share it in one central location. Depending on the physical size of the state and its population, there could be one to three Fusion Centers in a state.

In each Fusion Center is a Domestic Terrorism Unit, which even has billboards put up in various locations encouraging people to “See something, say something”.  In addition, Fusion Centers recruit boots-on-the ground civilians they call HUMINT (human intelligence), laughable from my perspective as a retired National Security Agency Intelligence Analyst, where that does not mean unsophisticated dupes and thugs as it does here.

Fusion Centers recruit regular people through quasi patriot or even faux patriot groups under the moniker of “Infragard” (under FBI auspices) and other such questionably fascistic groups. Fusion Centers even are known to utilize criminals and criminal gangs but I get ahead of myself.

Infragard is recruited by FBI/Fusion Centers from the same kind of people who volunteer for local law enforcement “ride-alongs” or citizen cop programs. Many are concerned do-gooders though many, too many, are bullies looking to justify their desire to control others and exert their will over those around them with false authority and power. These people are trained in a covert, relay-style militaristic stalking technique the intelligence community calls “cast iron coverage”, meaning rotating teams are assigned to a “terror suspect” 24/7, night and day, endlessly. Their job is to follow the target absolutely everywhere.  If the target goes to the grocery store, multiple people park in the parking lot to surveil the store while another team follows the person around the grocery store even peeking into his cart to report what he is buying. Seriously.  The target is also surveilled telephonically (eavesdropping via FBI ) and any appointments he makes by phone there is sure to be multiple Infragard in the waiting room watching him. The Fusion Center may even notify the doctor the person is under surveillance and they need access to his medical records. Some doctors comply.  Any family or friends he frequents will come under surveillance as well, maybe even be threatened, and multiple Infragard snitches will be parked in the neighborhood to keep an eye (and ear) on each visit.  Anyone else dropping by will no doubt have his license tag recorded and investigated. And all the target’s neighbors as well as the neighbors of friends and family will be notified that this suspicious person is under investigation. Sometimes for unnamed crimes, sometimes for crimes that never happened.

But what puts someone on this Watch List? Are they recent Middle Eastern immigrants with shady ties to potential terrorists?  People with dubious foreign entanglements? Oddly enough, not that many on the FBI/Fusion Center/Infragard Watch List are named Abdul or Fatima, but rather, Bob, Mary, Steve, Susan, Leon, Tawanda…. And a few Josés and Marias, as well as a few token Oriental names of people whose families have been here forever.

How did we go from creating a network of Fusion Centers and a covert, citizen standing army ostensibly due to a threat from “Muslim extremists” to utter surveillance harassment of our neighbors? Many of whose families have been here for decades if not centuries? And if you do not think that such concerted surveillance by civilians is not obvious to the target, you are mistaken.  So it is indeed harassment.

If you were bungling and obvious in surveilling someone in real intelligence operations, you would expect whatever it was you were hoping to see, would fail to happen because of the overt ineptitude of the agents. So what is the point of such activity? You have blown your cover. You have alerted the supposed suspicious person to the fact his activities are under scrutiny. The point clearly is not evidence-gathering, it is rather intimidation and harassment of the target.  But to what purpose? One answer is to push the person into acting out so the law can pounce on him and say, “See, we told you so!” Voilá, they have created a false narrative to support the ludicrous “pre-crime” theory that they can predict criminals thus certain people who appear innocent, nonetheless should be arrested before they inevitably commit a crime.  “Trust us, we have a scientific ‘fool-proof formula’ ”.

But could the real purpose not be to train up a covert army of unthinking drones and emotionally immature zealots among the populace to intimidate and bully absolutely anyone they are told to, at a moment’s notice, for no discernible reason?  How better to terrorize a nation and secretly “keep people in line” while pretending they have all the Constitutional Rights they ever did… unless they try to use them? Does this sound like Fascist Germany Brown Shirts or Communist country “Red Squads” keeping their captive citizens in line?

A cornerstone to this FBI/Fusion Center run citizen terrorist cells agenda is the FISA Court.  The FISA Court is a secret court where the FBI presents evidence that a certain person bears watching due to certain largely unsubstantiated accusations and maybe a flicker of evidence or maybe not. Since the courts circumvents the 4th Amendment, every citizen’s right to know IF he has been accused of a crime, WHAT crime, and accused by WHOM, the FBI is also tasked with presenting the court with possible extenuating circumstances, since the target cannot.  How likely is that to be reality? From past experience, not likely.

According to Bernhoft.law, they found out during the discovery phase of a lawsuit defending the owner of a drywall business, that when a powerful entity like the IRS (or arguably, any Federal agency) wants to go after someone but lacks “cause”, they put in a request to the main, secret Fusion Center for a “parallel construction” (falsified) dossier on the person as a premise to go after him, in this case to asset strip an innocent person. The hope is that the falsified charges are so daunting the person will “settle”.

Now, taking into consideration the Federal money and effort poured into nationwide Fusion Centers, their vast Infragard civilian network of covert standing army snitches and harassers (paid under-the-table tax money), the sudden power and control of local fiefdoms offered to unsophisticated locals, the money pouring into areas where snitches boost the economy with a sudden influx of disposable cash, especially to businesses which “partner with” Infragard, i.e. are funneled tax dollars to provide under-the-table services and products to the snitch army, and you have a booming cottage industry of harassment in search of targets… any targets.

Absolutely anyone will do.  No terrorist ties or leanings necessary.

Thus you have a fraudulent Terrorist Watch system set up to siphon billions of tax dollars away from actual National Security of the USA into a get-rich-quick scheme for Fusion Center/Infragard overlords, allowing the under-skilled /unskilled and immoral to sustain a comparatively lavish lifestyle preying upon their innocent neighbors, which their own abilities, talents or work ethic could never have attained in their lifetimes.  They are more than happy to ruin John Smith’s life for an “off-the-hook” new riding lawnmower or season tickets, while John Smith’s life endures slander and libel campaigns, which cause him to lose promotions, or even his job, maybe even his home and family, certainly his social standing in the community since he is now shunned and a social pariah. He, and others enveloped and preyed upon by this network become scapegoats and the new “Untouchables” class in America.  Fusion Centers (American Gestapo) and their Infragard “enforcers” make it clear to not only law enforcement that these targets are to be denied basic rights, but the entire town or city is to fall in line with the program or suffer the same fate.

For many years, there have been voices crying from the wilderness that something is wrong, but the Homeland Security establishment has rushed the narrative out through compliant mental health experts and law enforcement that “if anyone says anything to do with group stalking harassment, shut them down as delusional”.  Of course, when the numbers of people decrying group stalking harassment became alarming, suddenly the official narrative became “mass delusion”, the concept of which is itself delusional. Once you have numerous people of varying locations, ages, ethnicities, religions, creeds, races, education, social standing, career fields, espousing 80-90% the same experiences, it becomes logically and statistically impossible to dismiss the commonality of their claims as anything but the result of a tightly run, militarily-precise program executed by a mega authority.

Not only are innocent people thrown onto the fraudulent Terrorist Watch List as grist for a superfluous Police State “industry”, but other industries, companies, businesses, and even military and contractors have “partnered” with Infragard to utilize these “suspicious people” as test subjects and scapegoats to further their own agendas of profitable, never-ending fraud wars and/or extreme medical procedures.  Through legalistic sleight of hand and purposeful misinterpretations of post 9/11 (unconstitutional) “law”, the secret National Security “business” has declared anyone listed as suspicious (no probable cause needed), to be a “terrorist”, and therefore secretly stripped of all rights, Constitutional, Civil, and Human.  Terrorists you see, can be assassinated, anywhere, anytime. But neither the means of assassination, nor the length of time needed to do it, has any restrictions or specifications. This has opened up the masses of innocent people declared terrorists by a wink and a nod agreement between the FBI and the FISA Court to being categorized as non-human, biospecimens. Yes, you read that right, non-human, non–consensual biospecimens. Anyone, anywhere can be declared such.

Right now, you have a very small window of opportunity to act to defend yourself, your children, your grandchildren and the future of civilization and humanity.