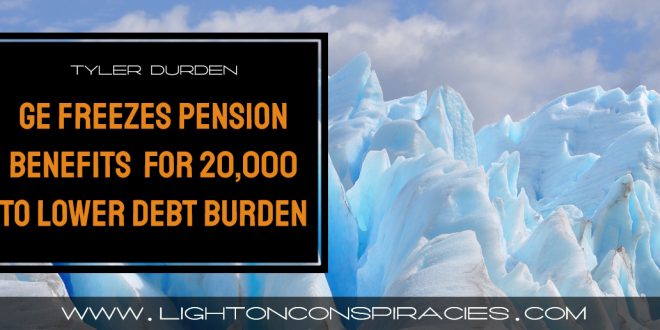 In what looks like a dry run of the looming pension crisis facing corporate America, GE said on Monday that it would freeze pension plan benefits for 20,000 American employees with salaried benefits, WSJ reports. The company also plans to freeze supplementary benefits for roughly 700 employees who became executives before 2011 in an attempt to shave as much as $8 billion off its long-term pension deficit.

With GE shares down 20% since Larry Culp took over as CEO last year, the CEO who was supposed to rescue the company’s perennially-languishing share price is facing pressure to cut GE’s debt burden amid a downturn in the company’s power-equipment business, Bloomberg reports.

To offset the cuts, the company is planning to pre-fund $4 billion to $5 billion of the retirement obligations it’s anticipating for 2021 and 2022 (the obligations are owed according to the Employee Retirement Income Security Act, or Erisa).

The money will come from $38 billion GE expects to net from divestitures and savings from the pension freezes.

GE plans to offer 100,000 former employees who haven’t yet started collecting retirement benefits the option of a lump sum, in effect buying them out of the company’s retirement obligations. It expects roughly one-fifth of those offered to accept the buyout.

The company’s shares climbed 2% on the news in premarket trading.

The cuts are part of an already-announced net debt reduction plan intended to shave between $9 billion and $11 billion off GE’s debt burden, helping to lower the company’s leverage ratio to roughly 2.5x net debt to EBITDA by the end of next year.

“Returning GE to a position of strength has required us to make several difficult decisions, and today’s decision to freeze the pension is no exception,” said Kevin Cox, GE’s chief human resources officer, in a statement.

GE closed its pension plan to new entrants at the start of  2012.

While several states, including Illinois and New Jersey, have opted recently to start reducing their pension shortfalls, US corporations are often in even worse shape than the public sector. But these cuts should help forestall the pension nightmare facing the US, if only for a little while.