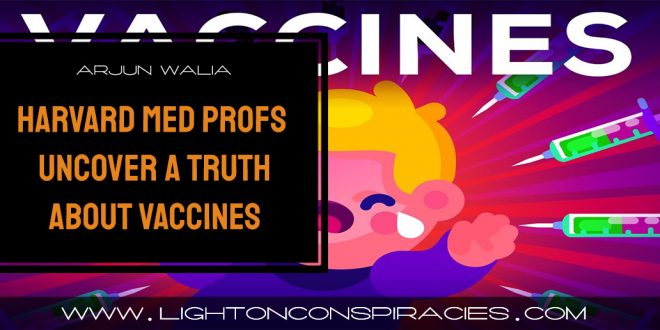 A 2010 HHS pilot study by the Federal Agency for Health Care Research (AHCR) found that 1 in every 39 vaccines causes injury, a shocking comparison to the claims from the CDC of 1 in every million.

Are vaccines really as safe as they’re marketed to be?

We are constantly told that vaccines are safe and effective and that there’s nothing to worry about. This simply isn’t the case, and it’s a hard-to-swallow truth that many people refuse to acknowledge. Mass marketing campaigns portray vaccines in a ‘God-like’ light, and the science is being ignored. The truth is that vaccines are actually exempt from double blind placebo controlled studies and they have not been put through appropriate safety testing. Furthermore, a number of concerns have been raised about vaccine safety by a number of scientists arounds the world. I like to use aluminum as an example. A study published in 2011 makes the issue quite clear, stating, “Aluminum is an experimentally demonstrated neurotoxin and the most commonly used vaccine adjuvant. Despite almost 90 years of widespread use of aluminum adjuvants, medical science’s understanding about their mechanisms of action is still remarkably poor.” Fast forward nearly a decade later and scientists have now shown that injected aluminum does not exit the body, it actually sticks around and gets carried by specific cells into distant organs and into the brain where it can be detected after injection (source)(source). Multiple studies have emphasized these findings, and the studies do nothing but trigger silence from big pharma as well as our federal health regulatory agencies.

Federal health regulatory agencies like the Centers for Disease Control and Prevention (CDC) have a long history of traceable corruption and not responding to inquiries made by scientists. One example comes from a  pilot study by the Federal Agency for Health Care Research (AHCR) to test the efficiency of a state-of-the-art machine counting (AI) system on data records from the Harvard Pilgrim Health Care Institution.

Preliminary data was collected from June 2006 through October 2009 on 715,000 patients, and 1.4 million doses (of 45 different vaccines) were given to 376,452 individuals. Of these doses, 35,570 possible reactions (2.6 percent of vaccinations) were identified. This is an average of 890 possible events, an average of 1.3 events per clinician, per month. This data was presented at the 2009 AMIA conference.

This completely contradicts the CDC’s claim that 1/1,000,000 people are injured from vaccines.

The doctors also bring up something very important, and that’s the fact that investigators from the CDC’s Vaccine Adverse Events Reporting System (VAERS) participated on a panel “to explore the perspective of clinicians, electronic health record (EHR) vendors, the pharmaceutical industry, and the FDA towards systems that use proactive, automated adverse event reporting.”

As the authors state:

Low reporting rates preclude or slow the identification of “problem” drugs and vaccines that endanger public health. New surveillance methods for drug and vaccine adverse effects are needed. Barriers to reporting include a lack of clinician awareness, uncertainty about when and what to report, as well as the burdens of reporting: reporting is not part of clinicians’ usual workflow, takes time, and is duplicative. Proactive, spontaneous, automated adverse event reporting imbedded within EHRs and other information systems has the potential to speed the identification of problems with new drugs and more careful quantification of the risks of older drugs. (source)

What’s really telling is that the doctors state that there was never an opportunity to perform system performance assessments due to the fact that “the necessary CDC contacts were no longer available and the CDC consultants responsible for receiving data were no longer responsive to our multiple requests to proceed with testing and evaluation.”

That last part is quite concerning, isn’t it?

It reminds me of the Spider Papers.

A group called the CDC Scientists Preserving Integrity, Diligence and Ethics in Research, or CDC SPIDER, put a list of complaints in a letter to the CDC Chief of Staff and provided a copy of the letter to the public watchdog organization U.S. Right to Know (USRTK).

We are a group of scientists at CDC that are very concerned about the current state of ethics at our agency.  It appears that our mission is being influenced and shaped by outside parties and rogue interests. It seems that our mission and Congressional intent for our agency is being circumvented by some of our leaders. What concerns us most, is that it is becoming the norm and not the rare exception. Some senior management officials at CDC are clearly aware and even condone these behavior.

There is also a revolving door between CDC employees and Big Pharma employees. A great example with regards to vaccines would be Julie Gerberding. A fairly recent post by Robert F. Kennedy Jr. via his Instagram account explains:

In 2010 Merck rewarded Gerberding for her lucrative fealty to Merck during her 7 years as CDC Director with an appointment to run Mercks vaccines division at a $2.5 million annual salary and $5 million in stock options.

We Know About Vaccine Injuries, But Are Vaccines Even Effective/Necessary For Those Who Don’t Get Injured?

I like to use the MMR vaccine as an example for vaccine injuries.

According to a MedAlerts search of the Vaccine Adverse Event Reporting System (VAERS) database, which is the subject of the pilot study mentioned above, as of 2/5/19, the cumulative raw count of adverse events from measles, mumps, and rubella vaccines alone was: 93,929 adverse events, 1,810 disabilities, 6,902 hospitalizations, and 463 deaths  The National Childhood Vaccine Injury Act has paid out approximately $4 billion to compensate families of vaccine injured children. As astronomical as the monetary awards are, they’re even more alarming considering HHS claims that only an estimated 1% of vaccine injuries are even reported to the Vaccine Adverse Events Reporting, System (VAERS). Again, these facts are also illustrated by the study that’s the main focus of this article. If the numbers from VAERS and HHS are correct – only 1% of vaccine injuries are reported and only 1/3 of the petitions are compensated – then up to 99% of vaccine injuries go unreported and the families of the vast majority of people injured by vaccines are picking up the costs, once again, for vaccine makers’ flawed products.

From 2013 to 2017, measles killed 2 people, but the vaccine killed 127 people. The odds of dying from the measles are 0.01 – 0.02 percent, meaning you have a greater chance of getting hit by a lightning bolt multiple times. Furthermore, if your child contracts the measles, they will be immune for life, but that cannot be said for vaccinated children.

So there’s that, and then there is the fact that measles outbreaks have occurred in highly vaccinated populations. A study published as far back as 1994 in JAMA Internal Medicine makes this quite clear.

Measles is the most transmissible disease known to man. During the 1980s, the number of measles cases in the United States rose dramatically. Surprisingly, 20% to 40% of these cases occurred in persons who had been appropriately immunized against measles. In response, the United States adopted a two–dose universal measles immunization program. We critically examine the effect of vaccine failure in measles occurring in immunized persons.

The only sad thing about the study above is that they recommended more vaccines to try and make up for vaccine failure.

During the measles outbreak in California in 2015, a large number of suspected cases occurred in recent vaccinees. Of the 194 measles virus sequences obtained in the United States in 2015, 73 were identified as vaccine sequences. The media (Pharma-owned) generated high public anxiety. This fear mongering led to the demonization of unvaccinated children, who were perceived as the spreaders of this disease. Rebecca J. McNall, a co-author of the published report, is a CDC official in the Division of Viral Diseases who had the data proving that the measles outbreak was in part caused by the vaccine. It is evidence of the vaccine’s failure to provide immunity. (source)

According to an article published in the American Journal of Public Health in 1991, “In early 1988 an outbreak of 84 measles cases occurred at a college in Colorado in which over 98  percent of students had documentation of adequate measles immunity… due to an immunization requirement in effect since 1986.” (source)

A study published in the highly authoritative Bulletin of the World Health Organization looked at recent measles occurrences throughout China and found that there were 707 measles outbreaks in the country recorded between 2009 and 2012, with a steep upward trend in 2013. “The number of measles cases reported in the first 10 months of 2013 – 26,443 – was three times the number reported in the whole of 2012.” This is odd considering that since  2009 “…the first dose of measles-virus-containing vaccine has reached more than 90% of the target population.” (source)

A study published in the journal Clinical Infectious Diseases – whose authorship includes scientists working for the Bureau of Immunization, New York City Department of Health and Mental Hygiene, the National Center for Immunization and Respiratory Diseases, and the Centers for Disease Control and Prevention (CDC), Atlanta, GA – looked at evidence from the 2011 New York measles outbreak, which showed that individuals with prior evidence of measles vaccination and vaccine immunity were both capable of being infected with measles and infecting others with it (secondary transmission). (source)

The list of examples is long, and it suggests that we are seeing a failing vaccine instead of a failure to vaccinate, yet these are facts that mainstream media never addresses.

It makes you wonder, how effective are vaccines, and are they even producing immunity like they are marketed to do?

It’s quite clear that mandatory vaccinations aren’t justifiable. The information presented in this article is constantly ignored and never addressed by the opposition. Instead, mainstream media uses terms like “anti-vaccine conspiracy theories” and ridicule to further drive home their corporate agenda. Why are points made in this article never addressed and countered or even acknowledged?